Is the Internet a Brain? 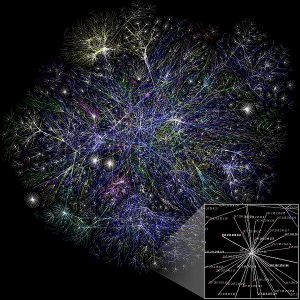 Fifteen years have passed since Michael Hauben published his essay entitled ‘The Impact the Net has on People’s Lives‘, in which he tells the story of how, when the internet was born (around May of 1968), Licklider and Taylor, of the ARPA Information Processing Techniques Office (IPTO) in Washington, predicted how computers would make a contribution towards human communication:

1) Communication is defined as an interactive creative process.

2) Response times need to be short to make the “conversation” free and easy.

4) Communities form out of affinity and common interests.

These four principles seem to be rigorously fulfilled as the internet grows exponentially. As Licklider and Taylor predicted, new technologies are not neutral— that would be impossible.

In recent years, several authors have written about the parallels between the internet and the human brain, including Jeff Stibel (Internet is a Brain), Miguel Pérez Subías (¿Es Internet un cerebro?) and Brian Solis (Social Media is About Sociology Not Technology).

But just a few days ago, science journalist Eduard Punset insisted on the importance of the internet as “a tool for stimulating all areas of knowledge and enabling users to advance in new ways,” then going on to say that, in some way, what makes us different from apes is precisely the internet: “Somos únicos gracias a las redes sociales”.

It’s interesting that almost 50 years have passed since Licklider and Taylor outlined these 4 rules, but it seems the debate on the history of the internet has only just begun.