How did they build the Golden Gate Bridge?

In the latest episode of our podcast Sounds Like Infrastructure, we look at the story of how the Golden Gate Bridge was built (you can check out that episode here). Read on for a sneak peek of that story.

Why was the Golden Gate Bridge so difficult to build?

The Golden Gate was so difficult to build because the location of the bridge brought with it a number of challenges. For one, the construction team would have to deal with the wind, fog and tidal movements of the bay. Then there was the San Andreas fault, located just seven miles offshore.

But an engineer named Joseph Strauss decided he would take on the challenge. And although he hadn’t much experience building bridges of this scale, he did have one trick up his sleeve: He was a very good salesman.

And so Strauss set up a company, which he called the Golden Gate Bridge and Highway District, and travelled around the bay area to drum up support for his bridge. But he didn’t just get support in the form of signatures from the locals, he got the locals to back bonds which gave him their financial support too, a move that meant that, when he finally submitted his plans, they were accepted.

What was the original design of the Golden Gate?

After his plans were accepted, the design for the bridge was published in the San Francisco Chronicle. But upon seeing the design that Strauss proposed, the people of San Francisco let their feelings be known. They did not like it. 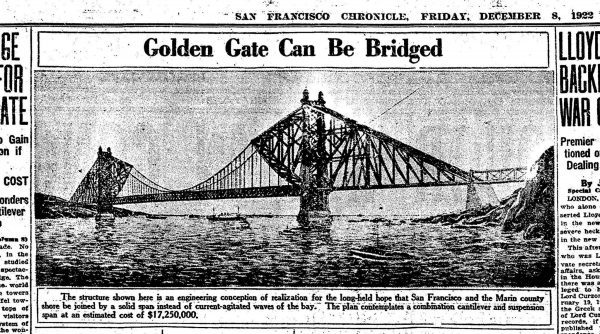 What they didn’t like was the clunky steel frame that would extend from either side of the bay. People bemoaned that it didn’t fit in with its surroundings. If San Francisco was to get an icon, nobody wanted it to be this.

So why did the locals not like it? Well, Strauss’s design was actually a hybrid of two types of bridges: the suspension bridge, and the cantilever bridge, and it was the cantilever part that people didn’t like. But Strauss had his reasons for including it.

The cantilever would solve the problem of building a suspension bridge whose limits had never been tested before. By building the cantilevers out from either side of the bay, Strauss would be able to reduce the suspension span of the bridge. It was a clever technical solution, but in the end, aesthetics and public opinion forced him to reconsider.

So Strauss put together a team of engineers who persuaded him to attempt a true, full length suspension bridge. Strauss signed off on the new design knowing that not only would please the public, but that it would be his name attached to the bridge. The delay also brought with it some good fortune as technology had advanced enough to make pulling off the world’s longest suspension bridge a possibility. Now they just had to build it.

How did they build the Golden Gate Bridge?

When you build a suspension bridge, things have to be built in a very specific order. The Golden Gate was no different. First, they had to build the piers on either side of the bay. Then on top of these piers, they built the iconic art deco towers. At each side of the bay they then built huge concrete anchorages where the cables would be secured. The cables were then brought from one anchorage, up and over the two towers, and connected to the other anchorage.

One of the most surprising things about these cables is that they’re not just one cable. Each cable is made up of 27,527 smaller wires that were spun together in place. This technique, pioneered by John Roebling during the construction of the Brooklyn Bridge, solved the problem of the fact that the cable would have simply been too heavy had they built it on land and tried to lift it into place. Next, suspender cables were lowered from the main cable and the road deck was suspended from them. 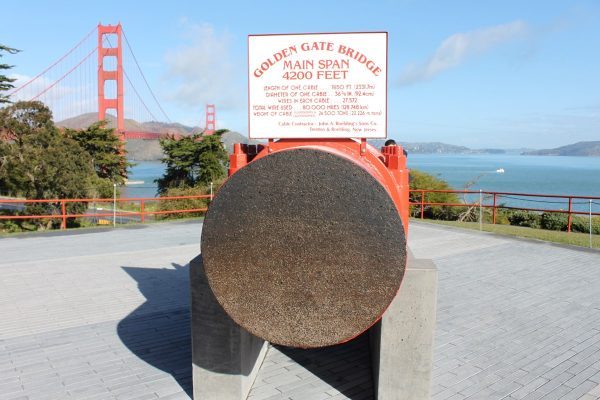 Once finished, the Golden Gate, like all bridges, would have to battle with the elements. And the most mischievous of these elements is the wind.

Why did the Tacoma Narrows Bridge Collapse?

The Golden Gate wasn’t the only suspension bridge being built in America in the 30s and 40s. And as these bridges went up, many were misbehaving.

The most famous of these misbehaving bridges was the Tacoma Narrows Bridge in Washington. The bridge itself was finished 3 years after the Golden Gate, but before it even opened, workers on site noticed something unusual: That the roadway would bend and move, even in light winds.

The reason the bridge would bend was because engineers on the Tacoma Narrows had decided to use plate girders instead of trusses to stiffen the bridge. It was an aesthetic choice. But the wind travelling across these girders caused the bridge to move in a wave-like motion. Something engineers call aeroelastic flutter. 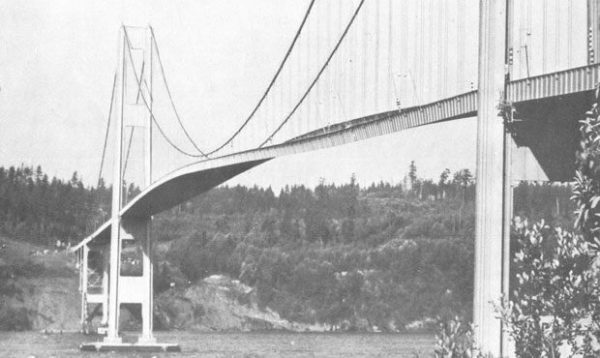 On the day of the collapse, the wind somehow caused the bridge to twist, which caused vortices over and under the roadway. These small vortices became amplified each time the bridge twisted. Imagine yourself on a swing. When you move your legs at the start you don’t move very much. But as you continue to move your legs in the same rhythm, that same force through your legs brings you higher and higher. This is what the vortices were causing the bridge to do.

And you can actually see videos of it happening. Including the moment the cables just couldn’t hold the load anymore and the bridge collapsed.

Listen to the full story on Sounds Like infrastructure

You can discover the rest of the story of the Tacoma Narrows and the construction of the Golden Gate in our podcast Sounds Like Infrastructure here. Find out why divers were used to build the foundations of the bridge, how the cables were actually spun, and how Strauss used pioneering health and safety on site to beat the odds of work related deaths.

Listen to episode 9: Building the Golden Gate: The Impossible Bridge on your favourite platform: