April 4, 1968. A gunshot ended the dream of Martin Luther King, Jr., and with it, that of hundreds of thousands of African-Americans who, 51 years later, are still fighting against inequality in the United States. Dr. King’s life was full of great marches and epic speeches. But there were also little moments that changed the world. However, today’s story is on bridges, roads, and tunnels, structures that are not only an essential part of our day-to-day lives, but are also the stage where history is written.

Dr. King’s life ended in Memphis, with an assassination that is still surrounded with mystery to this day. It started 39 years before that in Atlanta, the capital of Georgia. The social leader was born there under the name Michael King, Jr. to a religious family (his father and his grandfather were Baptist pastors). From a young age, he experienced racial segregation in the American South firsthand, and he soon became an activist for the civil rights of African-Americans.

In the ‘60s, his story made it around the world. Today, his name appears on streets all over the planet. From Martin Luther King Strasse in Bonn, Germany, to Martin Luther King Avenue in Port-au-Prince, Haiti. And of course, Dr. M. L. King, Jr. Avenue in Memphis. But King’s legacy in asphalt is not the protagonist of this story. These are the structures that commemorate his struggle. 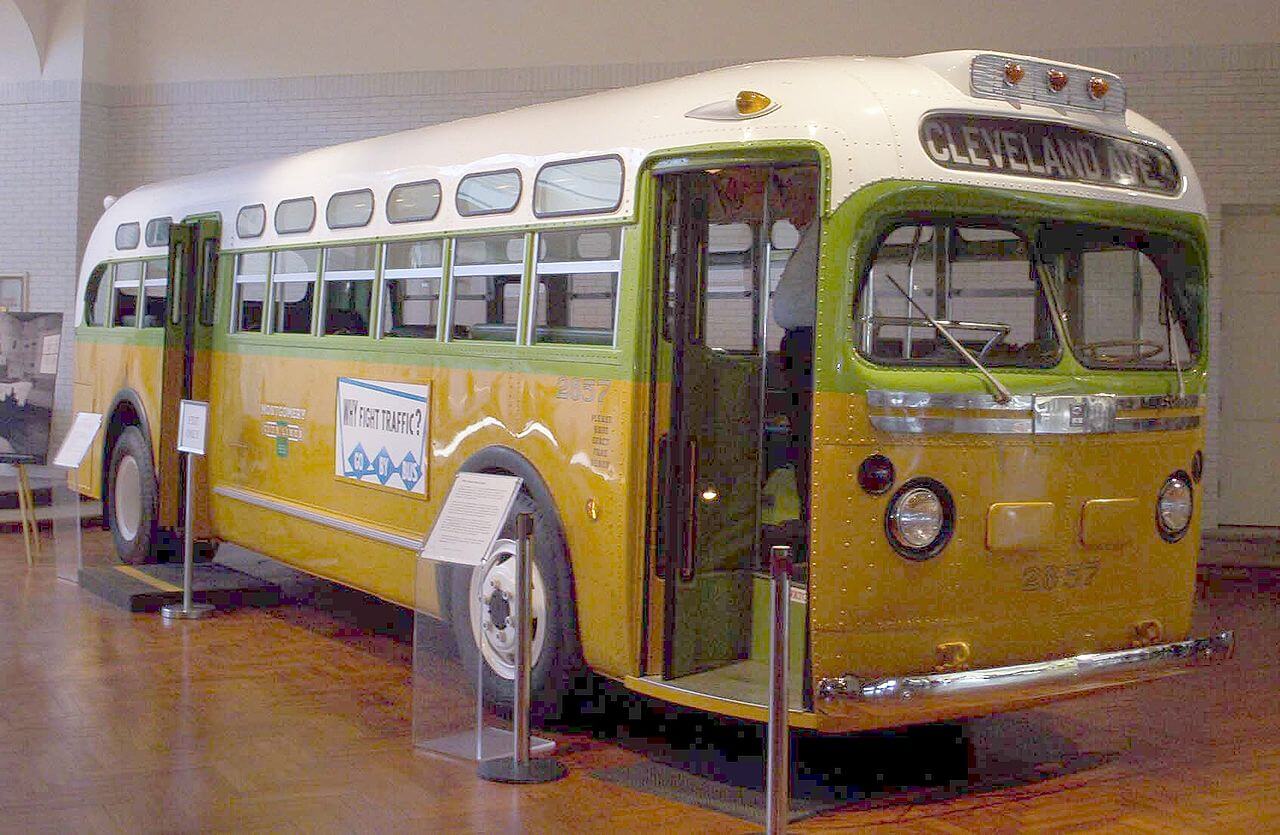 Original bus, restored, where the incident between Rosa Parks and James Blake occurred.

The lives of Rosa Parks and James Blake crossed on December 1, 1955. She got on a public bus and sat down. He, the driver, told her to sit in the back of the bus, as outlined in the transportation system’s regulations for African-Americans in Montgomery, Alabama. She refused and got off the bus (a General Motors bus that is now in a museum). By the time Blake finished his shift that day, that spark had ignited a revolution.

The city’s streets and its public transit system became the setting and object of a massive boycott in protest of segregation on city buses. It all started with small acts of protest. By February 1956, the movement had grown, and several hundred people had been arrested. Dr. King, a 26-year-old reverend who had just arrived to Montgomery, joined in and led a boycott that would end up lasting more than a year.

It was during this time that King’s fame spread all over the country, thanks to his abilities as a leader and a speaker. He was soon at the head of a peaceful movement for civil rights in the United States. First through the Southern Christian Leadership Conference and then the Congress of Racial Equality. 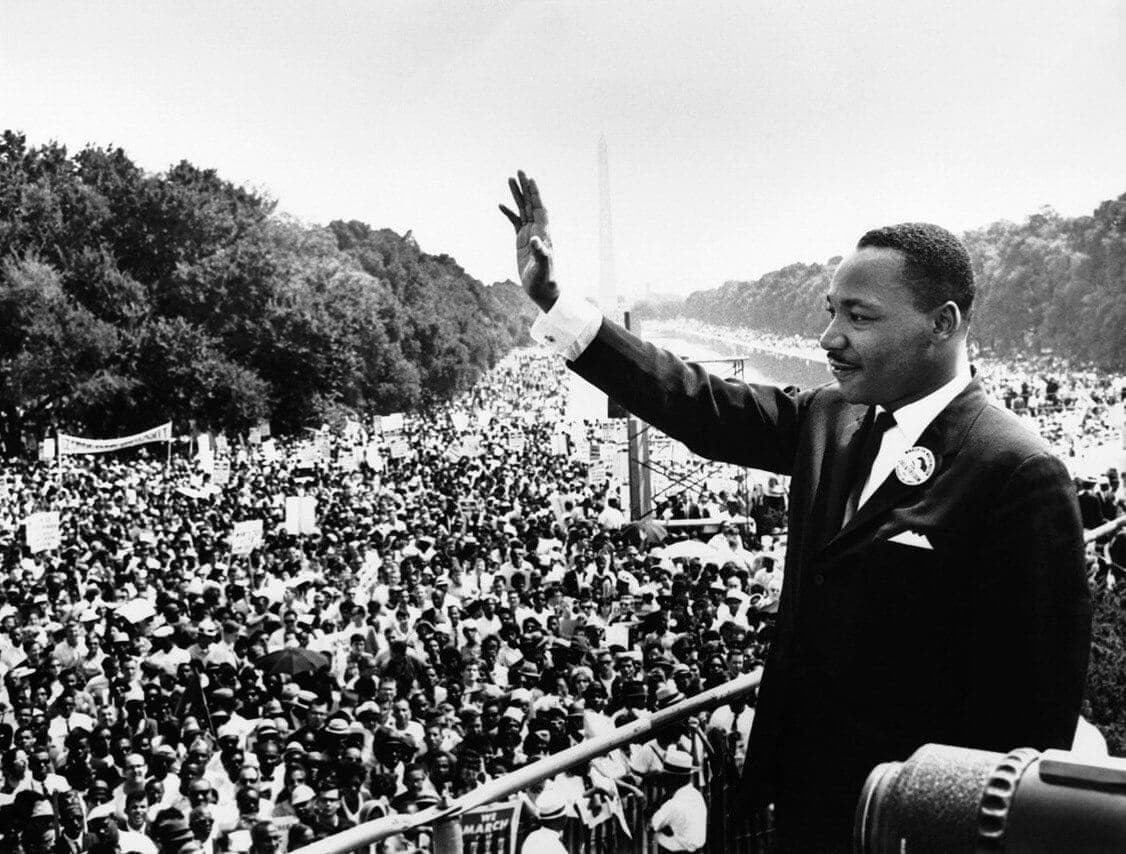 The underwater tunnel in Baltimore and the National Mall

I have a dream.

That is how what is probably Martin Luther King, Jr.’s most well-known speech begins. He gave it at one of the most important moments in the history of the movement. Those words were heard at the foot of the Lincoln Memorial during the March on Washington for Jobs and Freedom in August 1963, and they would shape the Nobel Prize committee’s decision the following year.

Around 300.000 people attended the protest and marched on part of the National Mall, the long esplanade that joins the U.S. Capitol Building and the monument honoring Lincoln. People came from all over the country. The morning before the March, more than 100 buses crossed the underwater tunnel from Baltimore every hour, headed toward the US capital. A tunnel that is 2.3 km long and was opened in 1957.

The auditorium at the University of Oslo

A year after the March on Washington, Dr. King landed at the Oslo airport. He was going to the Norwegian capital to receive the 1964 Nobel Peace Prize (an exception, as the rest of the prizes are awarded in Stockholm, Sweden). King had been nominated twice, by the American Friends Service Committee and by eight members of the Swedish Parliament. The award ceremony for who was at that time the tenth youngest winner in history took place in the auditorium at the University of Oslo.

The Norwegian university’s historic building was the official headquarters of the ceremony between 1947 and 1990. Since then, it has been held at the Oslo City Hall. The so-called Universitetets Aula was erected in 1911 as part of the original university complex. It is decorated with 11 original paintings by Edvard Munch. And over the course of its life, it has survived a fire and the Nazi invasion (who used it as a prison). 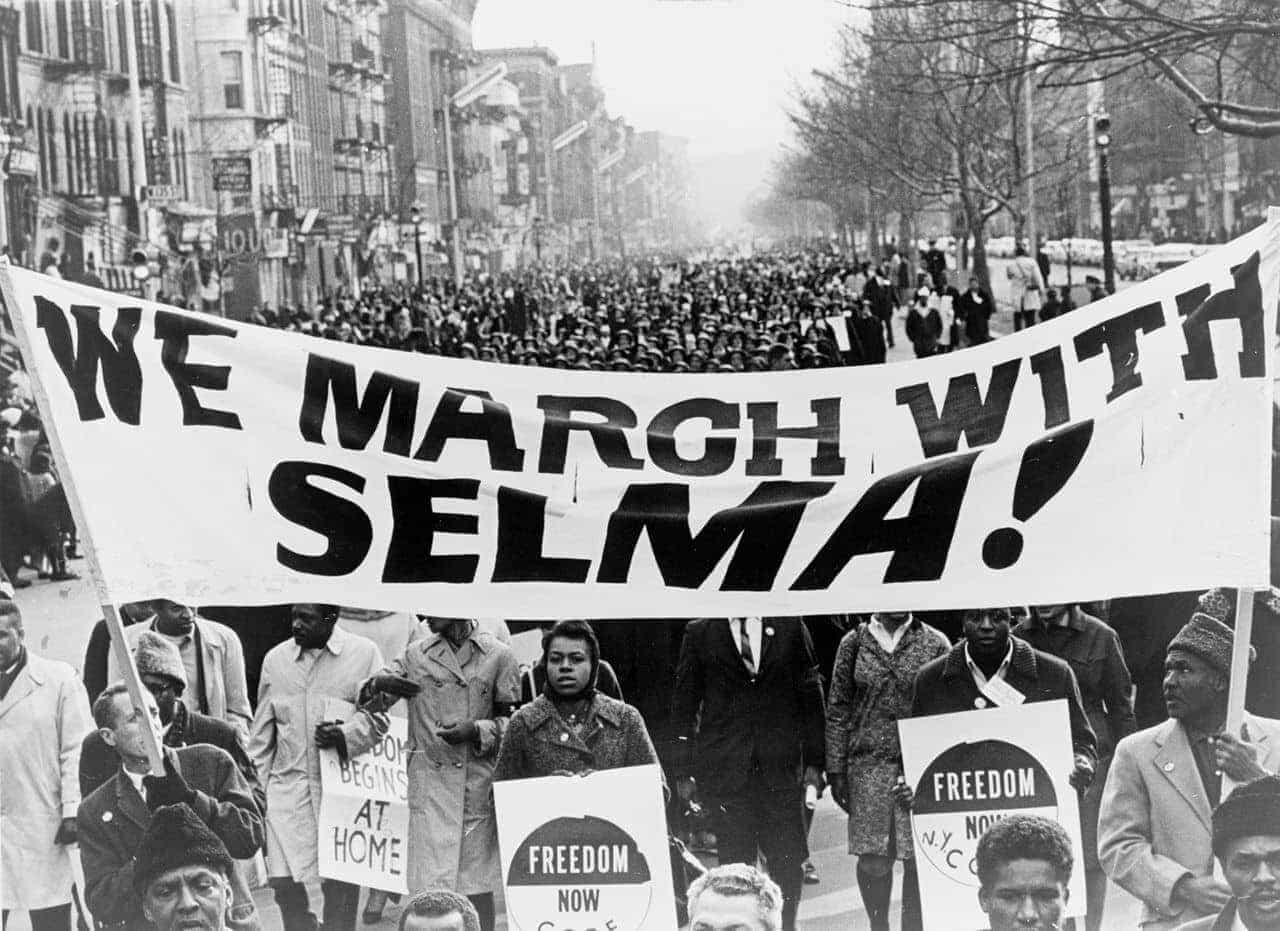 Protesters in the march from Montgomery to Selma on March 15, 1965.

The Edmund Pettus Bridge in Selma

These were hectic years for Dr. King and the civil rights movement. Over the course of 1965, he led three marches between Selma, Alabama and Montgomery, the state capital. The protests applied pressure to pass the historic Voting Rights Act of 1965 in the United States, which guaranteed all racial minorities in the country the right to vote. And they did so by catching the attention of the whole world, even though it was in a tragic way.

On the first march, on May 7, 1965, the police charged against the protesters as soon as they crossed the Edmund Pettis Bridge over the Alabama River, crossing the county line into Selma. The images made it around the world. The event became one of the many Boody Sundays of history. The steel bridge, 380 meters long, is still standing and is part of U.S. Route 80. In 2013, it was protected as a national historic landmark.

Mulberry Street and the Lorraine Motel

At the turn of the 20th century, Mulberry Street was the center of a bustling commercial district in Memphis. Then, during the Great Depression, hard times came to the Tennessee city, and the street took a turn for the worse. Today, only a handful of the original houses have survived, and the area is coming back, thanks to tourism. But if there’s anything Mulberry Street is known for, it’s the Lorraine Motel, which has been converted into the headquarters of the National Civil Rights Museum. 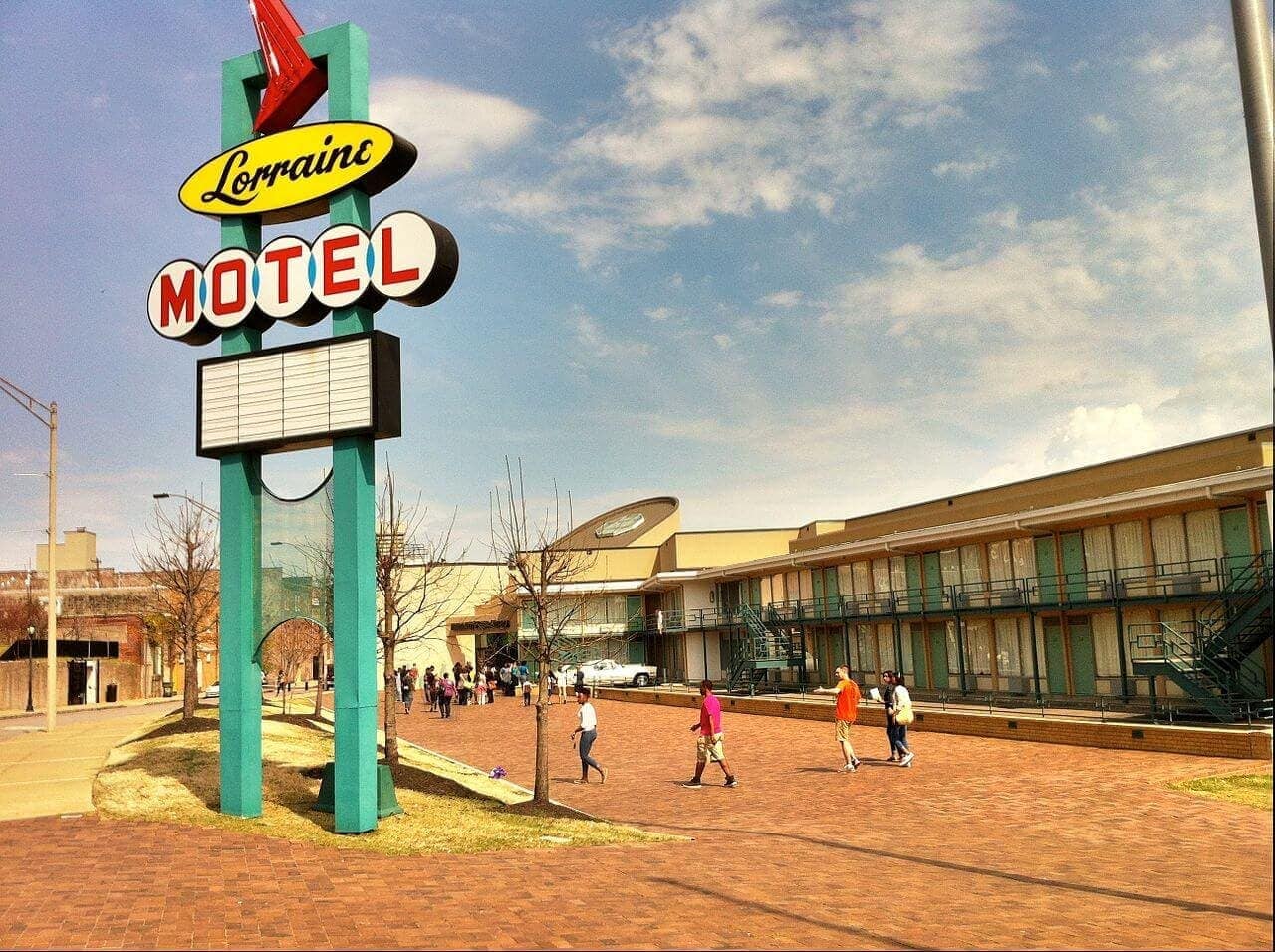 In the ’60s, the motel was part of The Negro Motorist Green Book (the same one featured in the Oscar winning movie this year). This meant that the Lorraine Motel was safe for African Americans. Dr. King stayed there any time he visited the city. April 4, 1968 was no different. He was in Memphis to support the Memphis sanitation workers’ strike.

He went out onto the motel balcony from his room (306) and spoke to a few colleagues who were below in the parking lot, a few meters from Mulberry Street. When he turned around to go back in, a bullet hit him in the neck and ended his life. Loree Bailey, the owner of the motel, had a heart attack when she heard the news and died a few days later. King had been the most well-known guest at her establishment. A true Nobel prize winner. Just like the structures that were his stage, his legacy is still standing.