Highways of the Future

The wheel was invented during the Bronze Age, more than four millennia BC. As with all significant archaic inventions, debate abounds over whether it was a unique innovation by a single culture and later propagated, or whether the idea emerged simultaneously in several cultures. I’m inclined to believe the latter hypothesis. 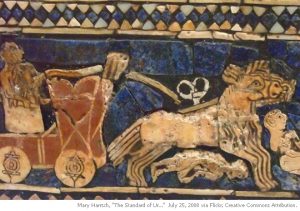 In ancient Mesopotamia, in the regions north of the Black Sea and in other parts of Central Europe, archaeological remains have been found dating from the same period that confirm this theory.

In the second millennium BC, Sumerians were already driving light chariots narkabtu, at up to 20 km/h (Peter Watson, Ideas: A history of thought and invention, from fire to Freud, 2006). The subsequent invention of the spoked wheel allowed for greater speed. But in the days of Julius Cesar, traffic in Rome had gotten so bad that the city implemented ordinances to prohibit vehicles (basically goods or military) from accessing the city during the day. The flow of traffic improved, albeit at the cost of citizens’ sleep.

Since then, traffic jams remain one of the challenges facing today’s cities. Drivers stuck in traffic lose many hours which could be dedicated to more productive tasks or to leisure activities. Traffic jams increase fossil fuel consumption and negatively impact air quality. Public transport, limiting access to city centers, and other measures help palliate this problem, but they are not enough: society has not been able to completely eliminate dependence on private vehicles. New concession projects currently under construction in Dallas and Forth Worth, Texas (among the worst 10 US cities in terms of traffic congestion) aim to give jammed roads a new lease of life.

The plan is to add new tolled lanes but not to reduce the number of current untolled lanes. This presents a challenge since public land can be expanded by means of expropriations, but additional land is not easily available in urban and peri-urban areas. So then, how can greater capacity be combined with occupancy in a reduced area? By using avant-garde technical solutions to place the new lanes at different heights compared with the existing road, either above or below. This is the solution adopted in the New LBJ Express project in Dallas LBJ Express Project Video.

These projects would be impossible if not for cutting-edge road design programs, which allow for a simultaneous analysis of the different levels of roads in a given section. The toll roads run in parallel (one in each direction), along with two untolled lanes, two drainage ditches, and many connecting ramps. Modern design programs make it possible to study interference and crosses between the lanes, bringing them closer together and using as little land as possible.