Closing the gap between Asia and America 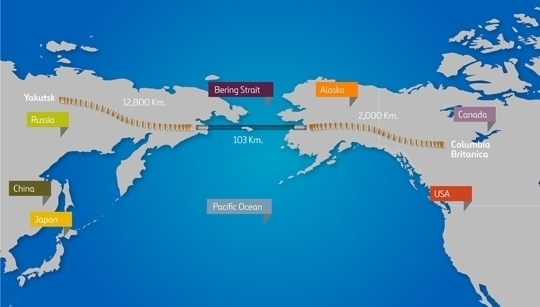 During the Paleozoic and Mesozoic Eras, there was a supercontinent called Pangea, which was comprised of the current-day continents. Eventually, tectonic plate motion separated the continents into their current positions.

An article by Rafael Muñeco in ABC suggests that Humanity will be able to bridge the distances between the continents with infrastructure of future. There is currently a proposal to build a railway connecting Russia and the US, stretching approximately 15,000 kilometers, of which 9,000 already exist: the Trans-Siberian Railway.

The greatest challenge in this project is digging 103 kilometers of tunnel under the Bering Strait (i.e. twice as long as the Eurotunnel) at very low temperatures. It was this same inclement weather that enabled America’s first settlers to cross the frozen strait approximately 72,000 years ago.

This project will be the longest underwater tunnel in the world. The current record is held by Seikan, a 54-kilometer rail tunnel connecting the Japanese islands of Hokkaido and Honshu. The Bering project is organized in three phases:

1. Building 3,500 kilometers of track to connect Chukotka with the Trans-Siberian (which connects Russia, Mongolia and China).
2. Boring a 103-kilometer tunnel under the Bering Strait.
3. Building 2,000 kilometers of necessary rail infrastructure in Alaska (Cape Prince of Wales, Alaska-British Columbia, Canada).

Russia is firmly committed to the project which would establish a route for transporting goods between the US and Europe; however, it can cover at most 40% of the total investment.

These sea and rail routes will connect Europe, Asia and the Americas, and will increase the speed and flexibility of goods transport, making Russia a key nexus between Europe and America. The investment, amounting to approximately 60 billion euro, could be recovered in at most 15 years, and perhaps much sooner.

It’s amazing to think that, one day, someone could board a train in Madrid and travel by land (including a 103-kilometer tunnel under the East Siberian Sea) to the Perito Moreno Glacier, in Patagonia, Argentina. 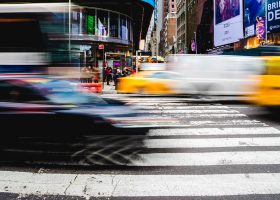