The creative energy of the automobile

The car was one of the main drivers of change in cities in the 20th century and will continue to play a key role in first half of the 21st. I’m not going to discuss the role of the car in smart cities, but I would like to reflect on how one of the world’s leading car manufacturers is approaching the idea of the future city. 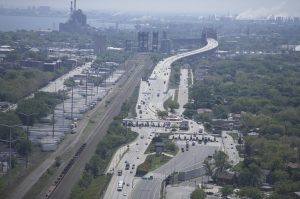 In addition to considering how cars themselves will evolve, Audi is focusing on vehicles in the new urban environment and on energy transformation, specifically transformative energies.

The energy of data, of social relations and of resources were the main themes discussed by experts at the Audi Urban Future Summit in New York.

This far-reaching project by Audi includes an area dedicated to sociological research called Urbanizing Technology, headed by University of Columbia Professor Saskia Sassen. Sassen has been studying the transformation of cities, their role in the global world, and new technologies since the 1990s.

Whereas technology companies are moving towards sensorization and digitalization of cities, Professor Sassen proposes the concept of open-source urbanism. She applies this idea to citizens’ personalized application of technologies, and, in the context of a city, the result can be quite different from what its designers expect. That is what makes a city alive and open.

In her article for mckinseydigital.com, Sassen emphasizes that the challenge is not building intelligent cities from scratch for 30 or 60 billion dollars, but, rather, putting all of this available technology at the service of citizens. Some cities will showcase technology or become laboratories for testing present and future solutions, with the sole goal of meeting the challenge or serving as a showroom.

In line with Sassen’s proposals, there is no greater challenge than urbanizing technology and transforming it into services with citizen participation. As Steve Jobs showed, we shouldn’t base new products or services on asking customers or users what they want or need; in the end, citizens will simply discard anything that does not improve their standards of living.

Audi is aware that the future can be any way we imagine it, and only by participating in this creative exercise can it invent new ways of using cars and design a car which adapts t