A few weeks ago I had the opportunity to attend a lecture at the Victoria and Albert museum given by the author Ken Follet. It started with a very interesting picture from a manuscript from the 15th century, The Bedford Hours, one of the finest treasures of the British Library.  The manuscript contains the depiction of the Tower of Babel story from the book of Genesis.

The thing that really caught my attention was a worker falling from the top of the building. It was a construction accident in the middle ages, not very different to some of the ones our industry is facing in the twenty first century. 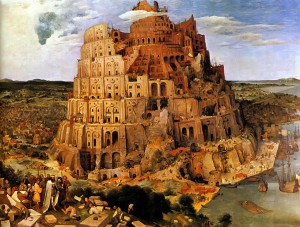 The Tower of Babylon (1563), painted by Peter Bruegel the Elder

Today we will not disagree about the need to reduce accidents to zero, but it hasn’t always been like that. The evolution of progress and improvement over the centuries teaches us a lesson in how innovation and endeavor could change our lives and the safety performance of our projects.

One of the great British geniuses of all times, Isambard Kingdom Brunel, was, in the early nineteenth century, a visionary on methods that could prevent accidents on construction sites.  An ingenious tunneling shield designed by his father in 1818 is said to have been inspired by the shell of the shipworm “Teredo Navalis”, a mollusk whose efficiency at boring through submerged timber he observed while working in a shipyard.  Although it initially helped to protect workers from cave-ins, there were two major incidents that killed several workers and badly injured the young Brunel. His original design was substantially improved by Peter Barlow in the course of the construction of the Tower Subway under the River Thames in central London in 1870. Probably the most crucial innovation of Barlow’s design was that it had a circular cross-section.  This shield is the antecessor of our modern TBMs (Tunnel Boring Machines), which allow us to deliver extremely complex projects with a massive safety factor.

Another remarkable example of a genius was John Roebling the civil engineer famous for his suspension bridges and especially his masterpiece, the Brooklyn Bridge, New York. He was one of the pioneers in the use of pneumatic caissons.  The caissons were sunk in order to provide dry space for workers to dig footings for the bridge’s foundation. Despite this innovation, working in the caisson, often brought on a serious medical condition caused by moving too quickly from a high-pressure atmosphere to a low-pressure atmosphere. His own son Washington Roebling was among many workers permanently injured by the then little understood “caisson disease”.  Several men died of the disease. All told, roughly 27 people died during the construction of the Brooklyn Bridge.

The economic success of the Panama Canal is well-known to everybody, but the terrible price in terms of human lives tends to be a lesser-known fact. The concept of a canal near Panama was first sought by one of the Conquistadores, Vasco Nuñez de Balboa, in the early 16th century. The first attempt to construct a canal began in 1880 by Ferdinand de Lesseps, but was abandoned 13 years later after nearly 22,000 workers died, largely from malaria, yellow fever and landslides.

In June 1902, the U.S. Senate voted in favour of taking the project from the French. John Stevens, Chief Engineer from 1905, argued the case against a sea-level canal like the French had tried to build and convinced Theodore Roosevelt of the necessity of a canal built with dams and locks. The very first thing Stevens did, was to built proper housing for canal workers and oversaw investment in extensive sanitation and mosquito-control programmes before construction even started, that eliminated malaria and yellow fever.

With the diseases under control, and after significant work on planning and preparing the infrastructure – we call this mobilization now – the construction began. The Americans also gradually replaced the old French equipment with proper, safer machinery designed for a larger scale of work. The canal was formally opened on the 15 of August 1914, two years ahead of the target date.  The advances in hygiene resulted in a relatively low death toll during the American construction but still, 6.000 workers died under the US-led effort.  This brought the total death toll for the construction of the canal to around 27,000.

There are other exceptional sources of inspiration in how real intervention can make a difference on our safety performance. The level of reduction in road traffic accidents recorded in Europe over the last 3 decades is exemplary, and despite the fact that the volume of traffic has multiplied by 3 since 1970, the number of deaths has fallen by 48% since then. Still, road traffic accidents are the cause of over 40,000 deaths in the European Union and result in direct and indirect related costs of 2% of the European Union’s GNP.  This successful reduction in road traffic accidents in Europe is the direct consequence of enforcement and innovation on three fronts: safer drivers, safer cars and safer roads.

A good example of how to make a road safer, by means of innovation and good design practice can be found in some of the new generation highways that Ferrovial has built. An outstanding example is the 407 ETR Highway in Toronto, whereby and despite an average of more the 400,000 trips a day, through good design practices such as free flow tolling or flatter embankments, the ratio of accidents is almost half compared with the rest of the entire highway network in Ontario.

These cases of success despite difficulties and setbacks,  teach us is that  improvement can be achieved by innovative measures (in the case of Brunel’s shield and Roebing’s caissons), good planning ( Stevens at Panama canal ) and  innovative design  (reduction in road accidents in the 407 ETR Highway).

Remarkable engineers and projects in the past have shown us that there is no limit to improvement, awareness and innovation. In times of recession the first things that businesses are likely to cut are training, quality and health and safety department budgets. This is not the answer, instead shrewd, forward thinking businesses should be using the economic down turn to invest in well-targeted training for their employees, identifying and recruiting talented construction professionals in readiness for when the upturn in the economy begins.

Design innovation that reduces risk to those who have to construct, pre-construction planning, off-site production and assembly, and standardization of processes are key tools to improve safety and environmental standards. The ongoing need to encourage employee and subcontractor operatives to improve their health and safety behavior and attitudes through progressive behavioral safety programmes is a must. These should set in our sites the ethos of ‘wanting to do things safely’ instead of ‘having to do things safely’.

By raising awareness, implementing bold policies and bringing technological innovation to our sites, as History teaches us, the goal of an accident-free environment grows ever closer.