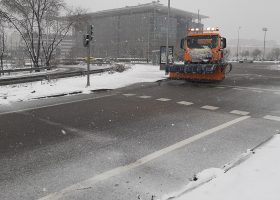 In the first five years of its PFI contract in Birmingham, Amey has committed to replace half of the city’s lighting columns. Birmingham will thus enjoy safe, environ – mentally friendly and, above all, luminous streets. A ground-breaking programme to replace the street lights in Birmingham with state-of-the-art Light Emitting Diode (LED) technology, which will cut carbon emissions and improve safety, was launched in December of 2011. 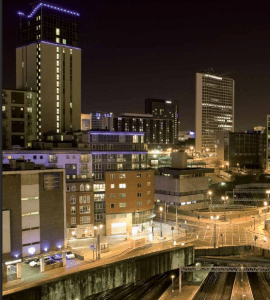 Birmingham is the first city in the UK to have LED lighting stock. The cutting edge lights will not only reduce carbon emissions by up to 50% and be brighter than traditional lights, they will also enable operators to control and adjust their levels according to what is happening in the surrounding area. For example lights can be dimmed over night when traffic levels are significantly lower – most frequently between midnight and 5am.

The new technology will allow the varying of light remotely to match traffic flow. As well as the significant environmental advantages of this work – light pollution will be virtually eradicated – the LED lights will also help to greatly improve the safety, security and the general environment of streets in the city.

Residents will feel safer walking down previously poorly lit streets because of the brighter light emitted from the LED lights. They allow a wider spectrum of colours to be seen as well as distinguishing facial features. This is not achievable with traditional lighting, which creates an orange glow, making colours indistinguishable.

Businesses will also benefit from the new lighting, which will create a differently lit environment outside closed shops, previously the target for vandalism and theft.