Construction of the Logroño bridge in Spain

It’s relatively easy to build a beautiful bridge over the Los Tilos valley: you just have to listen to the bridge and do what it says. That’s the thing with large bridges, it’s hard to make a bad one.

The same cannot be said of the Logroño bridge. There was a need to bridge the Ebro river outside the city of Logroño with a 140 metre span. The standard approach would have been to emulate the hundreds of other bridges over the Ebro. The idea was to do something different, but that did not mean tweaking one or more of the standard components.

To be valid and positive, the change must come from the same conceptual framework as the traditional solutions, but in which the classical approach is not the only possible one: the passage of time, accumulated knowledge and experience expand the scope of oneís possibilities. Thus arise variations which, at least from our standpoint, offer the spatial expression of strength.

We had already built through arch bridges on several occasions, following the approach of giving spatial form to a bridge that, by definition, is generally flat. We had designed and built a bridge in Zaragoza, with a 120-metre span, and a central arch. Then we designed a bridge in Elche (currently being completed) in which the spatial dimension is attained by splitting the deck, keeping the arch in the centre and attaching the stays to the edges of the deck, with the result that the stays form a cage between the centre arch and the eye opened between the two halves of the deck. It, too, has a span of 120 metres.

In Logroño, we increased the spatial dimension by keeping the arch in the centre and maintaining a single straight deck, but splitting off the pedestrian walkways so that they float over the river, suspended from the central arch. The bridge has a 140 metre span, the core is a mixed-material structure, and the pedestrian walkways are made of metal. Seen from below, this bridge is a departure from the norm.

3. The lateral walkways have a width of 4.00 metres wide at the top and 2.00 metres at the bottom, and measure 1.3 metres high. They are suspended from the central arch by their inner edge.

Javier Manterola is one of Spain’s most remarkable civil engineers. He is a professor at the Madrid Higher School of Engineering and a member of the Royal Academy of Fine Arts of San Fernando. Manterola has received numerous awards for his work in bridge design and other fields, including the Príncipe de Viana Culture prize and the Spanish National Engineering Award. The previous paragraphs, authored by Manterola himself, are part of one of the book “60 looks at Ferrovial“. 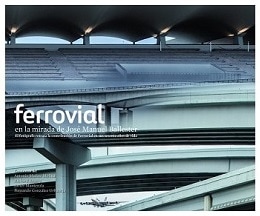