In the late 16th century the architect Domenico Fontana directed the construction of a canal to irrigate the lands of the Duke of Sarno in the foothills of Vesuvius with water from the river Sarno. To complete it he was forced to bore a tunnel through a small hillock. While excavating it he found worked marbles and decorated walls. Fontana paid no attention to them and completed his project at the behest of the Duke. 150 years later excavations began on this spot that were to bring the city of Pompeii to light.

We can learn two things from Fontana’s story. On one hand, the construction of a new infrastructure can rescue structures that were buried under years of oblivion. On the other, there is a compelling need to take the necessary measures to conserve this heritage so that future generations can enjoy it.

Ferrovial Agroman knows well how true these assertions are. The list of archaeological sites that the company has found during the execution of its works is a long one and covers a good part of the national territory. Paleontological sites that go back to the Cretaceous period, more than 80 million years ago, Roman settlements and Islamic hydraulic infrastructures are some examples of such finds, which occur both in the execution of major projects such as the construction of high-speed railway lines or highways and in others of smaller dimensions.

HOW IS A FIND MANAGED?

In Spain, the competences over the management of the archaeological and paleontological heritage fall to the Autonomous Communities. Nevertheless, the protocols of action and the regulations are largely similar between the different autonomies.

In a find of this kind of heritage while executing works, two figures stand out: those of the archaeological director and the paleontological director. Present in all of these projects, it is they who act as intermediaries between the company and the Department of Culture. They are generally external to the company that executes the works.

If a project affects an area of possible archaeological or paleontological wealth, zones are defined in which excavations will be undertaken. The result of these is recorded in a report drafted by the archaeological or paleontological director and sent to the Administration, which will determine what is going to be done (remove the artefacts, continue the works, incorporate the finds into the project, etc).

A similar process is followed if the find occurs by chance: the work is halted, an excavation is performed, the archaeological or paleontological director drafts a report and the Administration defines the steps to be followed.

SOME OF FERROVIAL AGROMAN’S DISCOVERIES IN SPAIN

The list is a long one. Below we give you some of the archaeological and paleontological sites that Ferrovial Agroman has brought to light.

The paleontological site of Lo Hueco was discovered in May 2007 as a result of a routine inspection in the installation of a cut-and-cover tunnel in the AVE Madrid-Levante section that Ferrovial Agroman was undertaking between the Cuenca towns of Arcas del Villar and Fuentes.

Lo Hueco has uncovered one of the largest collections of dinosaur remains in Europe. The more than 8,000 fossils found date from the Cretaceous period and mostly belong to sauropods from the Titanosaurus group, dinosaurs of large dimensions that could measure as much as 20 metres and weigh up to 30 tons. There are barely any articulated remains of this species on the old continent.

The importance of such a find led to changes in the initial project for this high-speed section. The spot where Lo Hueco is located was going to be crossed by a tunnel. It was finally built as a trench tunnel.

In 2009, Ferrovial Agroman was chosen by the Town Hall of Torre Pacheco, Murcia, to undertake the rehabilitation of Fontes House, a homestead dating from the 19th century, and the construction of the Historical Archive.

During the reconstruction works some important remains appeared in the subsoil. The archaeological excavation permitted the documenting of a republican military encampment, a hydraulic structure from the imperial era containing some paintings, farming tools, Islamic jars and kitchen utensils and modern-contemporary hydraulic structures. The finds were incorporated into the project. 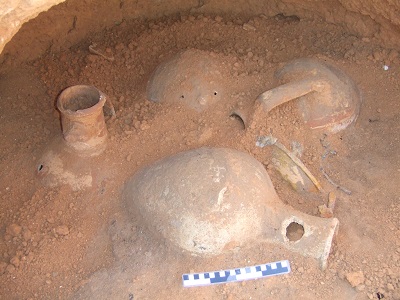 Site on the estate of El Bañuelo, Fuenlabrada (Madrid)

In 2005 the construction of the industrial estate of El Bañuelo brought to light two Visigoth necropolises with more than 200 tombs (dating from around the 6th century) and the remains of a Late Roman farming community. These finds are among the most important from that era within the territory of the Madrid Community.

Particularly outstanding in the Visigoth site are belt buckles, necklaces, bracelets and rings, some of them still fastened to the skeletons. From the Late Roman era there are remains of a wall of what could have been a farm and some farming tools. The artefacts were transferred to the Heritage facilities in Alcalá de Henares. 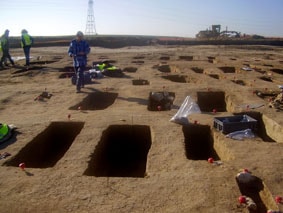 Basin of the Fortress of El Genil, Granada

The Alcázar fortress of El Genilis is an Almohad palace on the banks of the river Genil that was used as a recreational estate. The basin formed part of the hydraulic infrastructure that permitted the cultivation of the lowlands that surround this building.

A good part of the basin was destroyed during the construction of two residential estates in the 1970s. The segment that has reached the present day is listed as an Asset of Cultural Interest by the Andalusian Department of Culture. Ferrovial Agroman will integrate the basin into a suburban tramway station in Granada while respecting its original location. 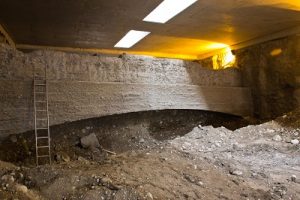 The excavation of the archaeological site of Lancia took place during the construction works of the Valladolid-León highway, specifically the section that runs between the León municipality of Santas Martas and the provincial capital.

The project has brought to light a necropolis and Roman residential constructions.