Op-ed by Pedro Rollán, Mayor of Torrejón de Ardoz, published originally on the 22nd issue of Inforvial, our corporate magazine.

In recent years Torrejón de Ardoz (Madrid) has embarked on a series of projects aimed at optimising the municipal services, generating less pollution and making a more rational use of natural resources. This has been done through the application and use of the new technologies available on the market.

To achieve this we organised a public tender for the management of an Energy Efficiency Plan that included the running of the municipal facilities of both the buildings and the public lighting network over the next 20 years. The tender specifications included a series of initiatives aimed at benefiting the administration, such as the successful bidder integrating all of the energy services, guaranteeing the maintenance of equipment, improving them through the use of the new technologies available on the market and reducing the energy bill and emissions of CO2 into the atmosphere.

In addition, the Town Hall sought to anticipate European energy efficiency regulations that require the Public Administrations to make savings of 20% before the year 2020 through energy efficiency. In exchange we offered an operating agreement that would last for 20 years in order to allow the company to obtain a return on any investments made in the town. 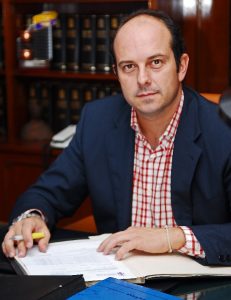 In the end the contract was awarded to Ferrovial Services. The choice was a success. Right from the start there was a clear understanding with the company to achieve these targets. In addition, Ferrovial has contributed to this project both the experience it has gained in this sector over the past years and its firm commitment to innovation through the close collaboration it maintains with the Massachusetts Institute of Technology (MIT) and other Spanish universities.

We thus set to work to drive this Energy Efficiency Plan forward. We first conducted a study to identify the fields in which most energy was being lost. To this end we monitored the public lighting in streets, roads and parks; electricity and gas consumption in public buildings and air conditioning and heating in public buildings.

Once the study was completed it was decided to switch off the lighting in parks after they close in the evenings and all activity ceases in them. The power of some light spots was also reduced by installing flow regulators and 192 control centres were modernised.

We also proceeded to the entire replacement of the public lighting in roads, substituting the old lights with LED-type lights, adapting the light flow to the levels set by Royal Decree 1890/2008 on Energy Efficiency. At this time there are 14,000 light spots in Torrejón de Ardoz.

In public buildings we replaced the old lighting elements with other low-consumption ones. Moreover, we worked on the state schools by replacing the old boilers with new ones that use city gas as well as driving forward the measures described above. Lastly, and in order to prevent the loss of heat or cold in public buildings, we installed opaque panels for radiators in order to make the most of their efficiency, plus isometric valves to regulate the temperature; we renewed the HVAC equipment and redistributed the HVAC system in buildings by placing HVAC equipment in specific rooms to favour the cooling of the rest of the rooms.

Through all these measures we achieved energy savings of 35% in overall consumption and 66% in the public lighting without the quality of the service being affected. We have achieved an annual reduction in consumption of 8,585 Mwh/year and a reduction in the annual cost of almost a million euros.

The objective has been reached. This is why I would like to congratulate Ferrovial Servicios for the great work they have done and for transforming Torrejón into a standard in regard to energy efficiency. The most palpable proof of the success achieved is that now the rest of the Town Halls are asking for Ferrovial Servicios “We want the same aswhat you have done in Torrejón”.