The Pine Processionary (Thaumetopoea pityocampa) is the most destructive defoliating pest of pine and cedar trees. It can cause severe defoliation which, if not contained, can kill the tree or leave it so weak that it falls prey to other pathologies.

The fight against these pests in the green areas of Northwestern Spain for which Ferrovial Servicios is responsible is mainly concentrated in parks and gardens, through the main issue is not the damage they can cause to the trees as a whole but, rather, the serious physical harm caused by the caterpillars’ highly irritating hairs to people, and dogs in particular. Dogs are especially sensitive since, when sniffing the ground, they come into contact with the caterpillars or their hairs, which cause severe allergic reactions that can require tongue amputation or lip surgery in extreme cases.

In view of the type of wooded area to be treated, the use of all pesticides has recently been ruled out for two reasons: firstly, to comply with forthcoming European regulations on their use in public areas, and secondly, because even during days with little wind, pesticides are carried by the sea breeze and end up contaminating the environment, and they can also eliminate insects that are beneficial to the ecosystem. 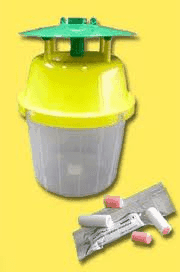 We have also ruled out injecting pesticides directly into the trunk (endotherapy) due to the size of the wooded area that would have to be treated and because this pest propagates by air, which reduces the treatment’s selectivity. The Pine Processionary should not be completely eradicated as it is important to maintain a balanced ecosystem; however, it must be controlled within acceptable parameters. To that end, we have been placing pheromone traps to capture male moths on their mating flight. In view of the size of the area to be protected, one trap has been set for every 2,000 m2, i.e. a total of 40 strategically-placed traps.

We have also installed 300 polycarbonate traps around tree trunks, which prevent the caterpillars from reaching the ground, physically impeding them from completing their biological cycle in the soil. As an additional measure, caterpillar processions found on a daily basis in paved areas are collected manually for elimination. In addition to these actions, informative posters will be displayed this year to ensure that people take precautions with their pets in these areas with a number of simple actions to avoid accidents during the caterpillar phase.

This system has enabled us to reduce the number of incidents to zero in people and to slight rashes in dogs.