This year and like every year around these dates we at Ferrovial await the results of the analysis conducted by RobecoSAM – who have evaluated our continuity in the Dow Jones Sustainability Index (DJSI) family – with enthusiasm and a bit of excitement. Finally, on Thursday September 10, we had received confirmation that we will continue to be a part of the family, meaning our presence in the sustainability index will already stretch for 14 consecutive years! A fact that is becoming increasingly complex, as our competitors continue to catch up steadily and, forgive the repetition, this results therefore in very high levels of competition. 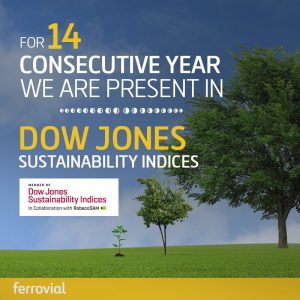 Over the past three years, Ferrovial has been the only Spanish company within its sector (Engineering & Construction) that has been included in this index. This does not mean that companies that no longer belong to it are underperforming, but that those that were selected by the index have just outperformed the rest in terms of sustainable development or, more clearly, have improved their results with respect to the previous year. Among the details of this good performance is Ferrovial’s updating of its Code of Ethics and Quality and Environmental Policy in 2014. In addition, we have also published a series of policies related to the company’s good conduct, namely in the field of Corporate Responsibility, Human Rights, Anti-corruption and Competition, following along the lines of our Corporate Responsibility Strategic Plan ‘Plan 20.16’. Much emphasis has been placed on achieving the goals that had been set in the Plan, as all corporate areas take part in it and the Plan itself is aligned with the business strategy. This is a characteristic that makes our ability to develop our sustainability model possible together with the support from top management.

What is the origin of the Dow Jones Sustainability Index?

In order to understand how this index works let us start at the beginning. The family of the Dow Jones sustainable indices was created in September 1999 with the purpose of reflecting the top, large company performers in terms of economics, social and environmental aspects. This family, which consists of several indices that are based on global, regional and national benchmarks, has grown and become diversified through the years with the creation of specific indices at the regional and even the industry level. It arrived in Europe in 2001 with the creation of several regional indices (DJSI Europe and DJSI Eurozone). The last ones that were created were the DJSI Emerging Markets and the DJSI Australia. Today, this set of indices constitutes a clear and sound benchmark for large investors.

The questionnaires inquire about those topics that are relevant to the sector and that might cause a material impact; in all, they inquire about the companies’ long-term value contribution. Each question has its own relative weight as a function of its importance within the sector and stakeholders’ expectations.

“Best in class” results of the Dow Jones Index

In the case of the World Index (DJSI World), approximately about 10% of candidate companies are selected to be part of this exclusive group, that is, those that have obtained the highest score in the ranking within their sector and which therefore represent the best sustainability performance. This year, the world index consists of 317 companies, 16 of which are Spanish. With respect to the European index, the initial universe is more reduced, starting off with approximately 600 companies. The selected group includes 20% of analyzed companies for a total of 162 companies in 2015. To many companies the presence or continuity in this index has become a fundamental and strategic objective given the influence it has on the so-called ‘socially responsible’ investors or ‘SRI’.

When using this best-in-class criterion and in addition to the score itself (from 1 to 100), companies are also informed about who the leader is – the company from the same sector that has obtained the highest score – when the results are given out, as well as the sector’s average score. And, as mentioned earlier, the already fierce competition is becoming increasingly higher in sectors such as ours, which means the margin becomes considerably narrower.