Water and sewerage to defeat Ebola

In technical terms, working on the Ebola crisis has been very interesting, and at the personal and human level, it is turning out to be one of the most complicated and exhausting experiences of my career. What keeps me involved in it, the most positive side, is seeing the impact of what we are doing, and how the number of patients, little by little, is nearing zero.

From the moment the Ebola epidemic was declared in March 2014 in Guinea, and especially after losing control of the cases in Sierra Leone and Liberia in July 2014, it was very clear that this crisis was going to have to be managed in a very different way from all previous ones.

The strategies used in all earlier outbreaks of this disease in the Democratic Republic of Congo or Uganda attempted to apply what had been done before in the same way, but the fact of the matter is that with a trans-national situation with scattered cases and multiple points of origin, the principal course of action (confinement of the outbreak and internal management) was not possible; Ebola had gone from being an purely medical emergency to become a crisis with many other facets.

This situation made it necessary to pay attention to a structural problem in the country, lack of knowledge and the application of “standard infection control and prevention precautions” (ICP), as well as the complete lack of training to apply the specific version of these precautions in the case of Ebola. For this reason, we focused our efforts on training the healthcare workers who were at risk, in an attempt to halt the infection on this front. However, we encountered an additional difficulty: the deficient healthcare infrastructure in the country radically slowed any attempt to apply this knowledge. Acción contra el Hambre has been working tirelessly since December of 2014 to achieve the widespread implementation of a comprehensive ICP strategy and improve water, sewerage, and hygiene infrastructure in the country. 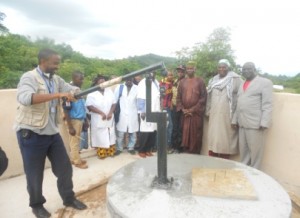 But the basic principles of control and prevention must be accompanied by basic infrastructure elements. In situations in which neither hospitals nor healthcare centres, not to mention dispensaries, have a guaranteed water supply, all disinfection practices are doomed to failure. Even the simplest action, such as washing the hands of patients and workers with a chlorinated solution, becomes an insurmountable difficulty because it requires additional management and expenses, such as, in the best case, having to pay for barrels of water. Also, in healthcare structures that lack latrines, it is very difficult to talk about controlling the biological risks. In a country in which the management of waste in general, and bio-medical waste in particular, is at the very least incorrect, any efforts at containing not only Ebola but any infectious disease, are in vain.

For this reason, we emphasized the rehabilitation and improvement of the existing water supply systems in hospitals, such as the Ignace Deen National University Hospital, and the creation of safe water points in healthcare centres and dispensaries. Also, latrine blocks were renovated or built in many healthcare structures, and an initiative was implemented to improve waste management at the national level, based on the installation of incinerators or improved waste incineration and storage pits for dispensaries with the largest numbers of patients, as well as training all workers in triage techniques (diagnostic techniques) and techniques for the destruction of medical waste. 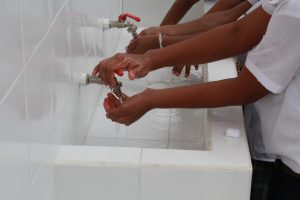 And we didn’t stop there. We also provided urgent support to different institutions, such as the World Health Organization (WHO) and Doctors Without Borders (MSF) in the search for technical solutions to guarantee sewerage in the temporary isolation zones for patients. One example is the design of a system for containing excretions using portable toilets, which was included in the Ebola response kit of MSF, and which has already been used in the Donka National Hospital, the country’s main hospital, and in the country’s largest and most modern centre for treating Ebola victims, the Nongo CTE.

All of these efforts improved the capacity of healthcare workers to protect themselves and their patients from Ebola infection, while at the same time increasing the resilience* and capacity of the Guineans to respond to this outbreak and future outbreaks of this disease in the years to come.

*Resilience: resilience, or the capacity of a person, home, community, country, or region, to coexist, adapt, or recover quickly from crises and pressures; it covers five key concepts: adaptation, resistance, transformation, preparation, and recovery. The last cholera epidemic clearly demonstrated that the response to the problem cannot be solely medical. For this reason, Acción contra el Hambre, with the support of public financers, private companies, and citizens, has opted for a holistic and comprehensive focus that adds strengthening of water and sewerage infrastructure and promotion of hygiene to the medical aspects. Our organization has also been working on the cultural and anthropological aspects that have shown themselves to be key to controlling epidemics in the most recent crisis.

Ferrovial and Acción contra el Hambre have formed different partnerships in the past years. The most recent consisted of financial aid raised by the company and its employees for the work carried out by this organisation in Nepal after the earthquake, and improving access to drinking and sanitation water by people affected by the internal armed conflict in the Department of Córdoba (Colombia). 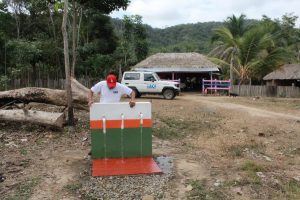 Though this latest project, which is part of the Social Infrastructure programme, 1,331 people in four different communities have gained improved access to water and sanitation infrastructure.