Engineering fiction - How would you build the Death Star?

The Death Star was the Empire’s ultimate weapon: a space station the size of a moon capable of destroying an entire planet. But the Emperor and his Imperial officers underestimated the tenacity of the Rebel Alliance, who refused to submit to this technological terror…

The premiere of the new Star Wars film, Episode 7 – The Force Awakens, means that right now many of us have our eyes turned to the most famous Galaxy of all time. Therefore it’s interesting to investigate the “real” characteristics of the Space Station from the film that kicked off the whole saga back in 1977 (Star Wars – A New Hope).

The first Death Star was a grey-coloured spherical station with a diameter of around 100 miles, divided into two hemispheres, which were then subdivided into 12 zones with control bridges. The station’s main armaments were located in the north hemisphere, with a high-power superlaser cannon. The inside was arranged into 84 independent levels, each one divided into 257 operational sub-levels.

In the film, the station boasts 628,628 crew members, 27,048 Imperial officers, 167,216 pilots and more than 730,000 armed forces including troops, storm troopers, artillery and support personnel, not including the 400,000-odd droids. It might seem like a vast quantity and yet, according to Physics Professor Rhett Allain of the University of South-eastern Louisiana, more people could have inhabited the Death Star than currently live on Earth.

According to the story told by Star Wars, the space station was constructed during the beginning of the Galactic Empire, and took 20 years to be completed due to supply problems, trade union disputes and design issues, which were subsequently corrected.

Scientists from the aforementioned university calculated how much time it would take to build the Death Star using only Automated Transfer Vehicles (ATVs) with a useful load capacity of 7,200kg per vessel, similar to those used to transport shipments to the International Space Station. The results are surprising: to get the job finished in 10 years they would have had to launch four vehicles to the station per second. If they sent one ATV a month, it would take 5,000 million years to complete the job, which would mean inaugurating the station after our Sun has gone out. We’ve got a lot to learn from Imperial technology and its engineers!

Furthermore, the entire outer hull of the Death Star was coated in steel quadanium. Taking this material (without quadanium!) as a benchmark, a group of economics students from the University of Lehigh, Pennsylvania, decided to investigate how much it would cost to build the station. To calculate this they also assumed that the density of the material would be similar to that of a modern warship, and concluded that they would need more than one trillion tonnes of steel to build it. Considering the price of the material in the year the study was carried out (2012), the cost of the works would come to 852,000 trillions US Dollars, equivalent to 13,000 times the world GDP for that year. The sum does not include labour, arms or interior decoration. 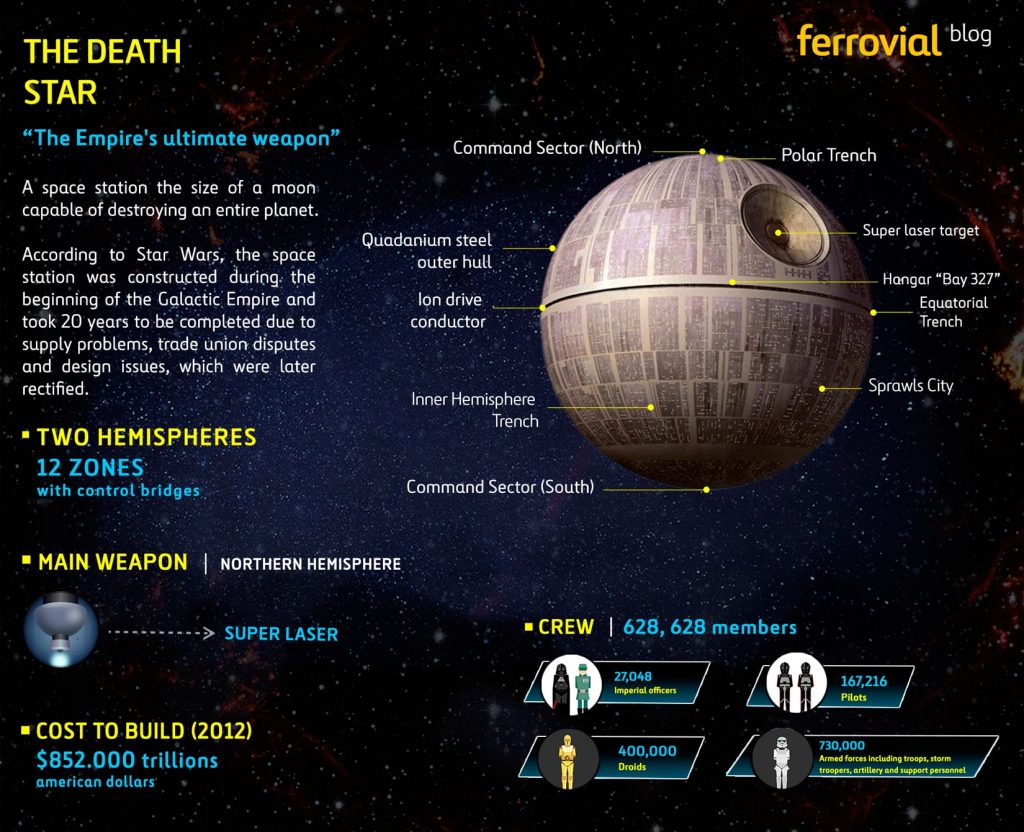 Given the budget, it is no surprise that the White House refused to give in to a petition signed by 25,000 US citizens to build a Death Star, arguing that the loss of money would be “out of this galaxy”. The report, drafted by the Science and Space Subdivision of the Office of Management and Budget at the White House put forward another argument that was not to be sniffed at: “Why should we spend tax-payers’ money on a Death Star with the fundamental weakness that it can be destroyed by a single man?”

So it doesn’t seem likely after all that the Earth will be getting its own space station from the first Star Wars film in the near future however we shall live in hope that the force will be with us!