When you think of a bridge, words like strength, solidity or resistance are the first to spring to mind; words that convey a sense of structural durability. So it is rather surprising to learn that the first bridge over Niagara Falls started off with a kite, something we tend to think of as soft and light, rather than associated with the building of a hanging bridge.

But the first suspension bridge was a relatively light affair when compared to modern bridges, and so it is appropriate that it started with a small piece of rope and a kite. For the seven years it remained standing, it served as a crossing for pedestrians, people on horseback, horse-drawn carriages and light carts.

This hanging bridge, which was completed in 1848, had a road deck constructed of 2.4 metre wide planks of oak and two 24 metre towers, one at each end, to hold the weight of four cables from which hung 120 iron tension stays. 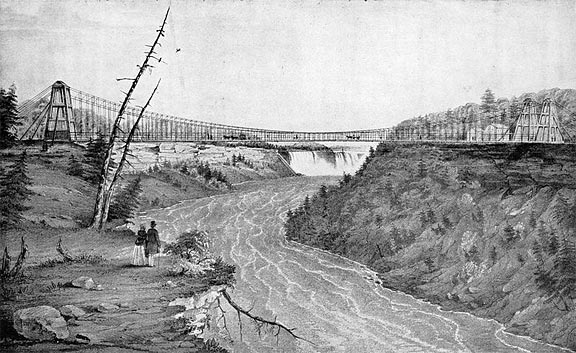 Lithograph of the first suspension bridge over Niagara Falls, created by Charles Parsons in 1898. From the book “The Niagara Railway Arch”, by Richard S. Buck.

Why build such a bridge then?

In 1812, the United States of America went to war against the Canadian colonies of the British Empire. Distracted as the English were with Napoleon, the Americans thought they could take advantage of this to overpower their northern colonies. But they hadn’t counted on the English sending armies to North America to recover these territories, once Napoleon was defeated in 1814.

Come 1846, both sides were tired of waging war, and Canada and the United States agreed to unite the two countries by means of a bridge over the Niagara River.

Today, crossing from the United States to Canada at this point is relatively simple, given the many ferries crossing Lakes Erie and Ontario. But way back then the quickest trade route from the State of New York to Toronto involved a trek around either of the two lakes shielding the city: north via Wellesley Island, or south through Detroit. A detour which neither Americans nor Canadians wished to take.

The first bridge to be built at this point was made with plaited rope, metal stays and oak wood, all of which materials were easy to find in the United States. As the first steam locomotive was only built in 1804, this first bridge was conceived and designed solely for pedestrians and horse-drawn vehicles, the most common mode of transport at the time.

The ins and outs of building a bridge with a kite

Following the decision to unite both provinces by means of a bridge, a company was formed to encompass the International Bridge Company of New York and the Niagara Falls Suspension Bridge Company of Canada (long, high-flying names with plenty of capital letters were all the fashion in those days).

Civil engineer Charles Ellet Jr. was then commissioned to construct the bridge (today he would probably be called the site manager). Ellet’s first task was to identify a location on the tortuous Niagara River on which to build the bridge.

As can be seen on this map by cartographer Pierre François Tardieu, the Niagara River flows from Lake Ontario in the north (though shown on the left on the map) to Lake Erie (on the right).

Creating a line of communication between the two banks of the river once the ideal location had been identified was the project’s greatest challenge. The distance across the gorge at the chosen spot was some 761 feet, or 232 metres (although some documents state 800 feet or 244 metres), and the drop to the river below 225 feet (67 metres). The location was the start of the Whirlpool Rapids, a particularly turbulent part of the Niagara River just before the famous falls. Carrying the necessary cables over by water was far too dangerous due to the strong currents, so alternative and somewhat unusual methods had to be used to lay the bridge.

The builder’s manual for suspension bridges of the time provided the following method for cases where the opposite banks of a river could not be linked in the traditional manner. First of all, two light but resistant ropes [A and B] are tied to an arrow, which is shot by an archer from one of the ends of the bridge to be built. Once on the other side, one of the ropes is used as a fixed line and tied at both ends. A metal ring is placed over rope [A], and the ends of the second rope [B] and a stronger third rope [C] are attached to the said ring. Thus, on pulling on the second rope [B] from the archer’s side, the metal ring slides along the first rope [A, which acts as a pilot rope], and drags with it a stronger cable [C]. The process of changing the guide rope is repeated several times until a sufficiently strong cable spans the total distance.

The problem with this method, however, was that nobody could shoot an arrow over such a distance. To do so would have required a scorpion, a Roman catapult capable of shooting arrows –even metal ones– over more than 984 feet (300 metres). But there weren’t any Romans around to make one.

A boy and his kite

It was then that Theodore G. Hulett, supervisor of the building works, had the idea of organising a kite-flying competition. With the tempting prize of five American dollars (a small fortune at the time), a rather unconventional contest was held to see who could fly a kite across the river gorge without breaking the kite string.

Little more than a day into the contest, a 16-year old boy named Homan Walsh managed to fly his kite from the Canadian side of the river to the American shoreline. The kite string was tied to several trees and used as a pilot line to stretch a stronger rope over to the other side using the aforementioned method. A thick cable was then dragged over in the same way from the Canadian shore, and thus commenced the building of the bridge.

There are documents recounting how, eighty years later, Homan Walsh still talked of his greatest childhood exploit as the time he flew that kite.

The first crossing of the Niagara River was made possible by another of Theodore G. Hulett’s inventions. Yes, this was the same man who had suggested the kite competition. Hulett was then an ironworker by profession, and a man of ideas. And he thought that while the bridge was being built, they might as well use it to make some money to plug financial gaps. 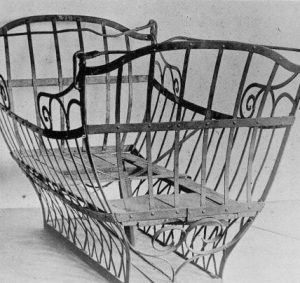 He designed an iron basket capable of transporting passengers and cargo from one of the towers to the other, rolling along a pilot line on which it was suspended. As such, it was the precursor of the cable car. The maiden voyage took place on 12 May 1848, and from then on anyone wishing to cross the river in the basket was charged a dollar.

As demand grew, and despite the high cost, a small footbridge barely three feet (less than a metre) wide was built between the two towers, allowing people to walk across for a return fare of 25 cents. This and the basket brought in sufficient funds to finish the bridge in record time. 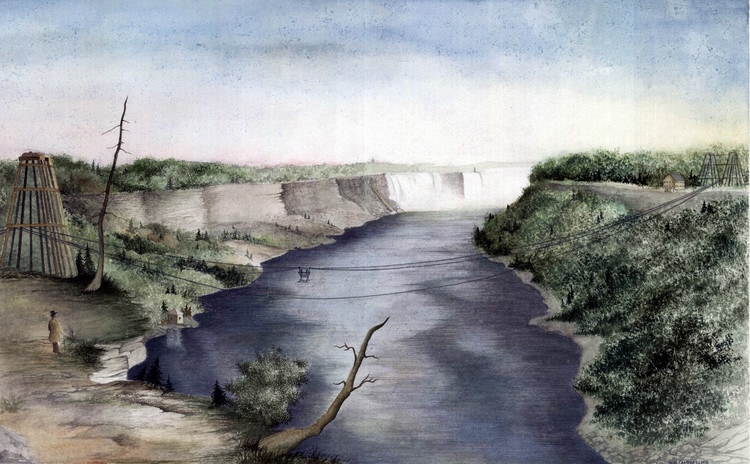 And so it was that on 26th July 1848, when the snow which blanketed the two countries on the day the famous kite was flown was but a distant memory, construction of the first suspension bridge over Niagara Falls was completed. Charles Ellet Jr. was the first to cross, in a horse and carriage. The bridge was officially opened to the public shortly afterwards, on 1st August 1848.

Seven years later, this bridge was used as a scaffold to build a larger, stronger one on two levels. The lower deck was designed for pedestrians and horse-drawn carriages, the upper deck for something much more modern: a steam locomotive. The engineer John Roebling put his professional career on the line when he took a 23-ton engine over the bridge… successfully, as it turned out.

And all because of a kite!

Pictures| Lithograph of the bridge in 1848; Engraving by P. F. Tardieu; Basket designed by Hulett; The first bridge.