Buildings that consume no power

Our recent step into the 21st century may in some ways seem like a step into the future (perhaps because it came with a change of millennium), yet we still do things the way other generations – for whom the world changed in a matter of years – did. My grandparents’ generation went from animal-drawn transport to using fossil fuels. Something that spread rapidly throughout the world: fossil fuels were cheap, and they did what they were supposed to do.

Oil has, to a much greater degree than almost all other drivers of pollution, taken us down a rather dirty and relatively predictable technological path, but its days are now numbered. And there may even be oil left in the world when we stop using it.  As José Luis Cordeiro said, “the Stone Age did not come to an end because we ran out of stones”. Humans found a better alternative material to use instead of stone.

Other materials or sources of energy, other than oil, can be exploited in the future. These sources are already relatively well known today and are slowly increasing their percentage contribution to world energy. Energy Matters published an article on how the use of coal, oil and gas derivatives are very slowly declining, to be substituted by cleaner energies such as biofuels, geothermal and biomass, hydropower, wind and sun (amongst others).

Energy consumption in our cities

Our cities today are highly polluted due to the very large numbers of vehicles in them. In many cities throughout the world, people must wear masks to avoid breathing in this pollution and suffering from respiratory problems in the future. An added problem is that a large proportion of the electricity generated throughout the world must travel hundreds of kilometres to supply the buildings that need it. Cities are gigantic structures using up resources.

In 2014, Madrid’s estimated energy consumption was close to 10,000 ktoe ( ktoe, kilotonnes of oil equivalent), of which 75% was fossil fuels. Although Madrid and other cities in Spain are shifting towards use of green energy sources, this change happens very slowly.

Most of us will have seen solar farms, large swathes of land given over to wind turbines, or even the Pelamis “sea serpent”, or wave power generator. But how can we merge together these different energy sources in order to generate energy where it is needed, when it would seem that they all require large areas of space? How can power generation be integrated into building construction? Is this even possible?

Zero energy buildings, or buildings with zero net energy, are self-powered buildings. In other words, they do not require an electricity supply for their energy needs, because they themselves generate all the power they consume.

Despite the fact that the concept of such buildings is not new (pioneering buildings using solar power in their architecture date back to 1977), social and political awareness is what has made these buildings a reality today, and what will make it a compulsory way of building in the future. The first zero energy home was built by Torben V. Esbensen and Vagn Korsgaard for the Technical University of Denmark[1]. It was a house that could be heated all winter using only solar energy.

The first challenge to overcome in order for a building to be truly “zero energy” is what is known as the “energy returned on energy invested (EROEI)”. EROEI is the ratio calculating the amount of energy generated by a particular energy source compared to the amount of energy used to build that energy source. In some cases, this comparison takes into account not only the cost of building the energy source, but also the cost of its design, manufacture and maintenance.

For example, solar energy using collectors has an ideal EROEI of between 1.6 and 1.9. A collector will, at the end of its useful life, have generated an amount of energy equivalent to between 1.6 and 1.9 times the cost of installing it in the first place (including energy costs for design, manufacture, transport, installation and maintenance). This means that if a collector breaks down two or three years after installation, it will have an EROEI of less than one and will therefore not have provided any power, it will only have consumed power.

The passivhaus is a building standard first developed in 1988 with a view to building homes and offices with an almost “zero energy” rating, through the use of different techniques. These techniques are, essentially, as follows:

Buildings conforming to these characteristics have been constructed in Germany since 1990, and have slowly spread to Austria, England, Spain, France and the USA.

But today we are already seeing innovative ideas, far beyond mere improvements to traditional building methods, which may seem extravagant and futuristic now, but will no doubt become part and parcel of building in the future. Some of these have already been put into practice.

One example is the company AeroVironment. Having worked many years for the aviation sector, it recently turned its hand to constructing buildings capable of generating their own power thanks to the slow-speed turbines fitted on them. 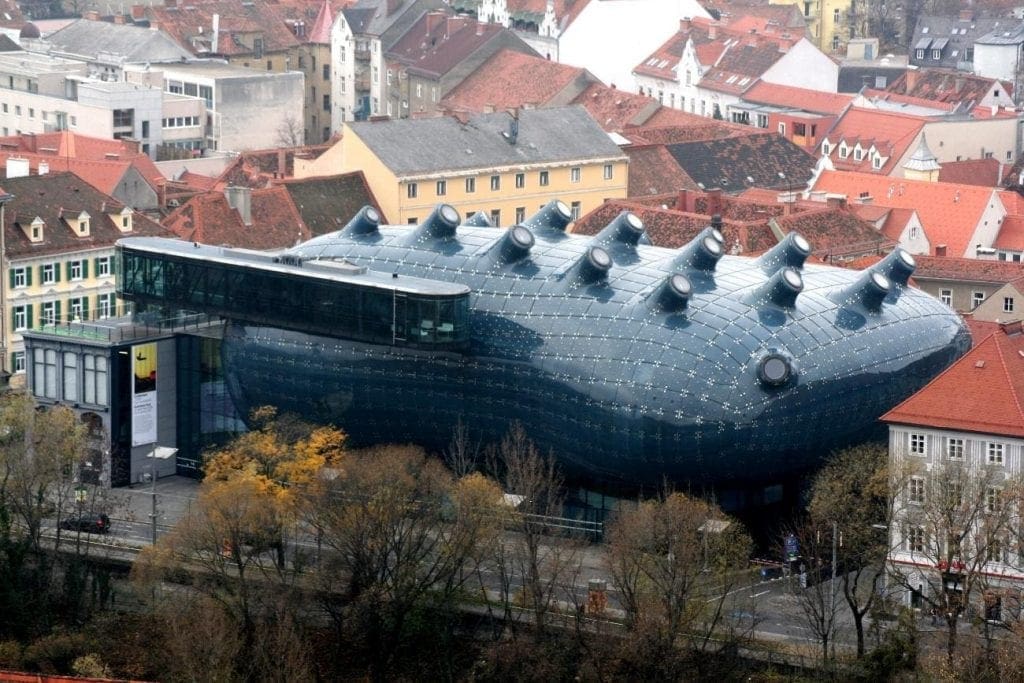 Another example is the Kunsthaus Museum in Graz (Austria) which, when seen from the air, seems totally out of place amidst the traditional landscape of the town. Its globular, organic construction looks rather like a gigantic cell in the midst of this small town of sloping red-tiled roofs. It is a building fitted with 1,288 semi-transparent acrylic photovoltaic panels which produce all the power the building requires.

The Dynamic Tower, a project by Italian architect David Fisher, is still at the design stage. Dubai, oil capital of the world, will be the first city to house this building. It will stand 420 metres tall and will be fitted with 79 wind turbines per floor. Additionally, the wind will make each floor move slightly. The building will therefore generate all its power requirements from motion.

Rawlemon, an engineering company which started up through crowdfunding, now owns a patent for a spherical ball lens which significantly reduces the number of solar panels required, thereby reducing the area of the collector. This lens can even work at night, with moonlight. Although performance is obviously lower, night time “solar” energy generation is a challenge that had for many years gone unsolved.

Although certain points in this article might seem rather like science fiction, the truth is that we are close to achieving a scenario where all new buildings will be “zero energy” buildings. In fact, European Directive 2010/31 requires that all buildings constructed or undergoing significant refurbishment from 2020 onwards must be zero energy buildings. They must be built in such a way that they will not need energy and, if needed, this will come from renewable sources.

Almost all renewable energy sources are much closer to having unit EROEI than oil, which currently has an EROEI of 8. However, there are already wind turbines available with an EROEI of 80, or hydropower generators with an EROEI of 250. With these figures, and taking into account that oil had an EROEI of 100 eighty years ago (energy costs for extracting the same amount of oil are growing), the path to follow seems obvious.[2]

[2] “Energy Payback Ratio of Energy Options», A Sustainable Future? The limits to Renewables, by David Elliott, Professor of Technology Policy at the Open University