The photo was of one of our construction sites for the Northern Line Extension in London and the tweet was from a young London based artist called Tom Cox. The vibrant colours, the quality of the artwork and the somewhat unconventional choice of theme for the canvas really struck us and we were curious to find out more!

We got in touch with Tom to find out more about why construction sites are a source of inspiration for him, the challenges of a construction painting and what would be his ideal city and building to paint. Here’s what he told us…

As an artist I observe, reflect and paint the environment in which I live – London. I have found Twitter to be of great use in connecting the appropriate community with each artwork. For example when I paint a construction, I think who would be interested to see this? How can I share my interpretation of the world that they experience on a daily basis? Naturally, in “Expansion”, I wanted to give you the opportunity to see the world you know at Ferrovial, in a new light.

I was passing the site on the 159 bus, which I take every day to my studio in Lambeth North. The scene of the diggers both directing their large yellow frames towards the centre of the site naturally created a focal point which caught my eye. I quickly took my camera out and crossed the top deck to take a snap before the bus pulled away. I was very pleased with the image an took it back to my studio translate into paints.

Painted from my original photograph of the scene I used Indian ink to sketch out the scene on a 100 x 50cm canvas. I have been employing this technique in the last 6 months to create expressive, bold forms in my paintings. I then painted over the sketched scene with oil paints for around 3 weeks until the scene was complete.

Watch this video of the creative process behind Expansion

Construction has definitely been of great significance to me this year as my studio, one of over 60 in The Make Space Studios in Lambeth North, has been sandwiched between two very large construction sites. Every day I hear the banging hammers, drilling, poles dropping, vans arriving, cranes moving. I have been lucky to be invited onto one of the sites and have so far painted three from the McAleer & Rushe site which is building a large Marlin Apartments complex on Westminster Road. They allowed me access to all parts of their work site and I was able to take photographs and sketch from the dynamic scenes of construction. I am currently painting another, as the site evolves so does the energy and focus of the images. I love it.

Each painting has its own unique challenges, from getting the right textures on the raw materials and excavated stone, to deciding how much focus to place on the face of the workers. I had a laugh from the site I have been painting as in my work “Upwards” I totally ignored painting all of their health and safety equipment, but hey, it’s my artistic license right?

Firstly, [inlinetweet prefix=”” tweeter=”” suffix=””]the strong angular lines which architecture creates is a real treat for me[/inlinetweet]. I can really use my body and make large slashing motions across the canvas with my brush. These bold marks create great perspective and energy in the images.

Secondly, the people interacting in the cityscape. Instinctively, when we see humans we create a narrative as to what they are thinking and doing. Often dwarfed by the buildings, I strive to develop a balance between the human dialogue and the aesthetic linear energy.

George Bellows, an American realist painter who was around in the early 1900’s. He was primarily focused on visual studies of urban settings such as New York. I saw an exhibition of his work a few years ago at the Royal Academy and was blown away. 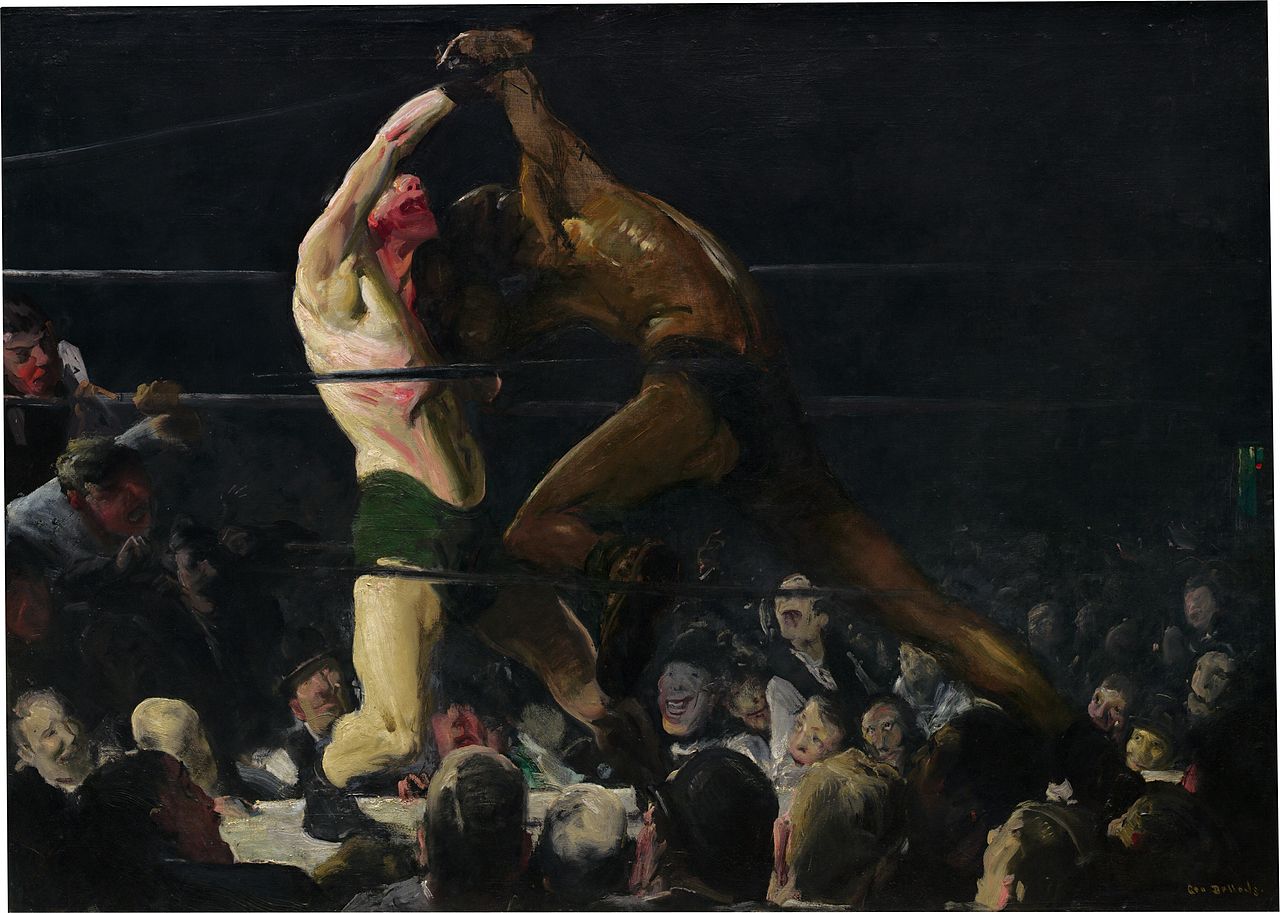 I’d love to go to Tangiers and follow in the footsteps of Delacroix. Specifically, the organic jumble of streets which make up Medina. It has staircases leading this way and that, it looks like the roads overlap and is very pedestrianized. [inlinetweet prefix=”” tweeter=”” suffix=””]The human nature of these ancient cities with their earthy construction materials would translate well in my style of painting[/inlinetweet]. This is probably why I enjoy the raw, unfinished exposed elements of construction site

Want to find out more about Tom Cox’s work?