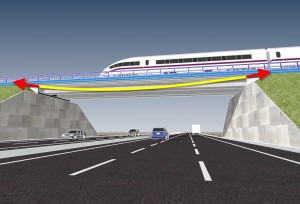 When we specialists talk about smart infrastructure, people immediately imagine 22nd-century steeply-banked roads where driverless cars move automatically to their destination at high speed, like bullet trains. In fact, high-speed roads could become a reality in a few years.

Intelligent infrastructure also includes GPS-controlled tolls. More than one government is considering a toll payment system whereby drivers pay for the kilometers travelled each month. In this way, municipal, regional and state infrastructure would be paid for with a tax applied directly to the consumer.

What I would like to discuss here are Intelligent Structures. Structures are a part of infrastructure: they are the bridges and viaducts on our roads, they form the backbone of our buildings, etc.

Until well into the 18th century, bridges were comprised of small arches made of stone or brick. With the arrival of the Industrial Revolution, at end of that century, bridges were built of cast iron, then iron, and eventually steel. Concrete bridges didn’t appear until later: in the 19th century the first arches made of bulk concrete were built, followed by reinforced concrete. The development of bridges was very important: prestressed concrete, invented by Eugène Freyssinet in the first part of the 20th century, played its most important role after World War II, as it was used to rebuild all of the bridges that had been destroyed in the conflict.

Prestressed concrete bridges have very strong steel cables inside; the cables are tensed to produce a compressive stress that balances the tensile stress. For example, a very simple bridge with a single span would deform downwards under weight, but pre-stressed cables first deform it upwards. As a result, when there is weight on the bridge, the upwards and downwards deformations offset each other. Until now, this has been done “statically”, i.e. the initial deformation from the prestressed concrete is the same regardless of the weight that the bridge is going to support.

We can make this simple example more complicated by choosing more complex structures. For example, let’s imagine a cable-stayed bridge, with its towers and cables keeping the large spans in place, stretching up to a kilometer over an open space. The towers have stays attached to the ground. The force on the stays increase as weight passes over the bridge and the towers deform. This can be stopped with active stays that are tensed by means of a jack as burdens cross the bridge.

Nowadays, the technology available means we can propose these types of structures; in fact, temporary structures of this kind exist, such as large falsework for bridges. The next step is permanent structures. Perhaps we will have to wait a few years for better backup electric accumulators and more reliable IT.