A Story for Adults

An invisible city which lets the world fly

Since we were children, we’ve fantasized – through films, literature and our own imaginations – about cities at the bottom of the ocean, cities in outer space, lost cities. I’d like to include a new category: The Invisible City. 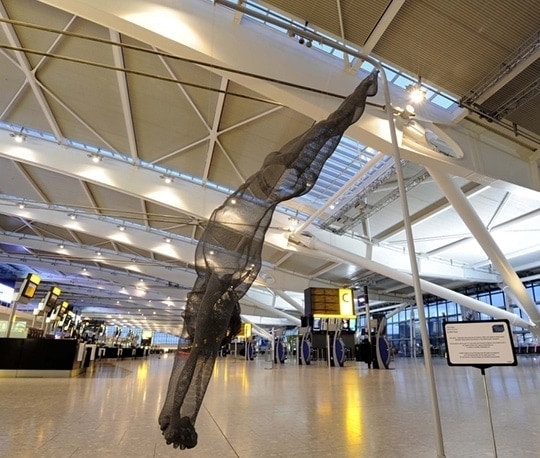 Another inhabitant of the invisible city.

Tom Hanks starred in an odd film (The Terminal) where he revealed The Invisible City’s secret and drew us into a story about the intense, bustling life that goes on in airports.

I’ve spent my whole life surrounded by airplanes – I was born on an island. As a little girl, I loved going to the airport and watching them take off and land. But now I marvel at seeing and experiencing the airport itself.

How many times have you gone to an airport to catch a plane, or to see someone off or pick them up? Have you ever really looked at what’s going on behind the scenes? It’s just like a city – there are streets where buses, cars and taxis drive, sidewalks that lead to the check in desks, moving sidewalks that take you to the boarding gates, and extensive shopping areas, with stores, restaurants and cafes, and crowds of people constantly on the go.

At dawn, the inhabitants of The Invisible City take to the streets and to their posts, moving the machinery that will make my trip possible. When I arrive, in a hurry, one of the inhabitants has already gathered a good number of trolleys beside the entrance to the bag drop-off point, while colleagues throughout the facility keep the public areas, bathrooms and corridors clean.

Once I print my boarding pass from a machine, without hardly having to wait, it doesn’t take me long to pass through security, where the guards, police and other uniformed inhabitants of The Invisible City ensure the security of residents and passengers, checking passports and keeping order.

As I move into the depths of the airport, I discover pharmacies, bars, boutiques, shops selling food and beverages, perfume and make-up, jewellery, books, electronics, plus ATMs, restaurants, coffee stands, all staffed by hundreds of inhabitants of this Invisible City, who push the wheelchairs of passengers with disabilities, help guide lost travellers and maintain the facilities. I watch the mesmerizing show as I wait until it’s time to go to my boarding gate. There I look out the large windows at the activity outside, on the ramp and on the runways where many other airport inhabitants are busy – engineers and mechanics check the airplanes, the catering services stock the galleys, others load luggage and other goods into the airplane hold.

I can picture the labyrinth of tunnels that brought the luggage to that point, and the most Invisible Inhabitants of The Invisible City, milling around in the depths of the airport, ensuring that its many mechanisms work properly.

How many inhabitants are underground at this very moment? Who is in charge of this Invisible City? I wonder. Is there a mayor, like in any other city, who directs the efforts of so many inhabitants in this apparent chaos to make my trip possible?

As I watch a check in agent – another inhabitant of this Invisible City – organize boarding for my flight, I imagine interviewing the important person behind the airport, the Manager.

Would you say that the Manager of the airport is like the a mayor of this Invisible City?

“To tell you the truth, I have the least important job among the over 50,000 people who work here, and we serve almost 100,000 passengers each day. Any technician, member of the fire service, or air traffic controller is playing a vital role in this Invisible City, all making it possible for so many people to travel safely, comfortably and on time. When that happens, nobody remembers that this airport has a mayor. That means that everything is working perfectly”.

At that moment, right on schedule, they announce it’s time to board my flight and I realize that, yes, you only wonder what makes something work when it doesn’t. That is precisely why airports are magical: all of the elements of this wonderful city work together efficiently and, therefore, invisibly, to bring me to my destination.

By the way, before we board, is it fair to call this The Invisible City? At Ferrovial Airports we’re wondering if “The Invisible City” appropriately describes the division. What do you think? Why not leave us a comment?

The end (for the moment).