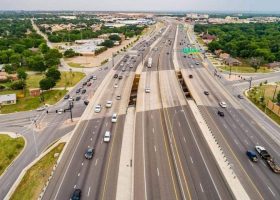 Ontario is one of Canada’s 10 provinces, but what makes it remarkable is that it is home to two of the country’s main cities Toronto and the capital, Ottawa. It has over a third of Canada’s total population, more than 13 million people, and is home to the bulk of the country’s industry, so it is no surprise that it needs good connections to link all its cities and people.

For this reason, the 407 ETR highway in Toronto was opened in 1997. It runs parallel to the city’s first ring-road, highway 401, which is one of the busiest roads in North America.

This Canadian highway is 108 kilometres long, and has 200 entrance and exit points, 137 bridges and 80 underpasses. Furthermore, it has one of the most advanced open road tolling (ORT) systems, which means drivers do not have to stop to pay, making it the world’s first fully electronic highway.

The road has an innovative system for toll collection, so instead of having to stop at the tollbooth and cause mile-long tailbacks, the highway’s technology detects the vehicles through number plate transponders, calculates the route taken, and then charges the amount due. The best thing is that drivers pay a toll that corresponds to the time saved by using the highway.

The highway 407 now has more than a million electronic toll prepayment  otherwise known as transponders among its users, which means that over a million drivers consider this road to be a fast, safe and reliable option.