What relationship is there between Gaudí and emerging technologies?

Gaudí not only has a very recognisable architectural style, he was also a true pioneer for his time. It should be remembered that he started working on the Sagrada Familia in Barcelona back in 1882. At the time, architects and builders used a very traditional two-dimensional approach to their work.

Gaudí worked with a different type of geometry, for which he needed a different work methodology. 2D graphics were no good to him, except for axis and column layout purposes.

The relationship between Gaudí and emerging technologies

The precursor of 3D

Due to the complexity of shapes of the Sagrada Familia, Antoni Gaudí switched to a three-dimensional approach. The design of the Sagrada Familia, which can also be observed in some of his other famous works, required 3D models for visualising architectural solutions and analysing structural feasibility. From the very beginning, Gaudí brought together a team of expert modellers and sculptors to study solutions which were later either discarded, or used and visible today.

Although Gaudí died in 1926, he left 1:10 and 1:25 plaster models of many parts of the building  Many of these models survived despite the fire which in 1936 destroyed the workshop where Gaudí used to work.The models were subsequently restored and classified by architects Francesc Quintana, Isidre Puig Boada and Lluís Bonet Garí, and the temple’s own modelling workshop. 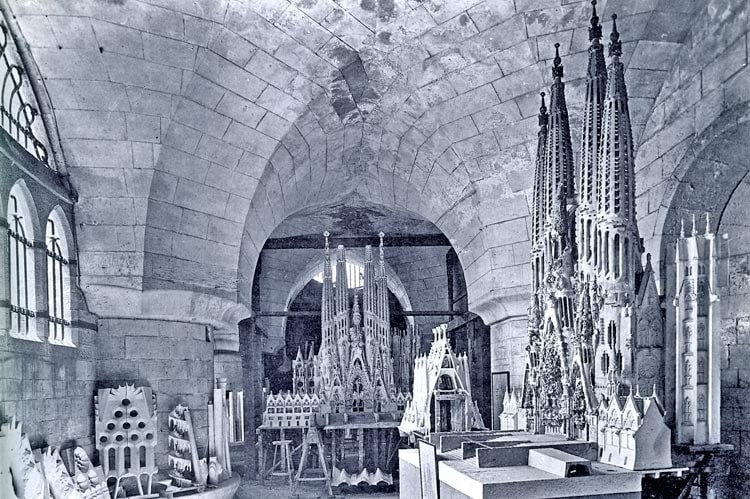 Full-size drawings have been computer-generated based on such models, and can now be used either to print using 3D printers or to make further replicas and reconstructions of the works of Gaudí. In fact, one of the architectural firms in charge of continuing work on the Sagrada Familia is using such techniques to finish the building.

According to Jordi Coll, one of the architects involved in building the inside of the temple, “if Gaudí were alive today, he would have taken 3D technology to the limit, for a large part of his work was already three-dimensional in concept”. In fact, current technology is helping to complete the work, especially in putting together and building its geometrical content with the shapes designed by Gaudí.

It was in 1991 that a team of architects from the Barcelona Technical University (UPC) realised that by applying computer assisted design (CAD) technology to the geometrical figures with which Gaudí worked it was possible to set parameters which followed certain rules and a mathematical logic. Gaudi did not use the ubiquitous decimal system, but the duodecimal system.

A book has been published describing how the Sagrada Familia has been built, and how work on it is being carried out today with the help of advanced computer tools.

As explained on the web page of Gaudi’s unfinished work there are several architectural innovations that we owe to this Catalan genius.

Hyperboloids, paraboloids, ellipsoids, helicoids, conoids or double twisted columns are some of the innovations which are so characteristic of Gaudi.

As we saw earlier, one of the specific characteristics of the work of this architect is that he used proportions based on twelfths of the largest dimension, as in 1 to ½, 1 to ⅔, 1 to ¾, etc., to provide proportions for the width, length and height of every part of the temple. For example; dividing the total length of the temple (90 metres) by 12 gives us a module of 7.5 metres, which is used for the floor plan and the heights of the Sagrada Familia.

The different measurements can be compared to better appreciate the use of numerical series, not only for the temple’s general dimensions, but also the diameters and heights of the columns, the diameters of the window openings and vaults, etc. For example; the total height of a column is always, in metres, double the number of points of the cross-sectional polygon of its base: a column with a 12-point star as its base is 24 metres high; a column with an 8-point star base is 16 metres high, etc.

The shapes of inverted hanging chains

Gaudí did not really enjoy drawing. In addition to his use of models, instead of the traditional plans, Gaudí designed a complex set of hanging chains that he attached to the ceiling to figure out the design for many of his religious commissions, including the Sagrada Familia itself.

Gaudí spent ten years of his life working on this “hanging chain” model, made with weights on strings. The resulting arched shapes were, when turned upside down, what the architect was looking for as an architectural shape.

It is known that Gaudí drew the outline of the temple he was designing on a wooden board (on a scale of 1:10), which he then attached to the ceiling. He hung cords at the points where the columns were to go. He then placed small sacks filled with pellets (which weighed a tenth of the weight the arches would have to support) from each of the catenary arches formed by the cords.

One of his first drawings of the design was this: 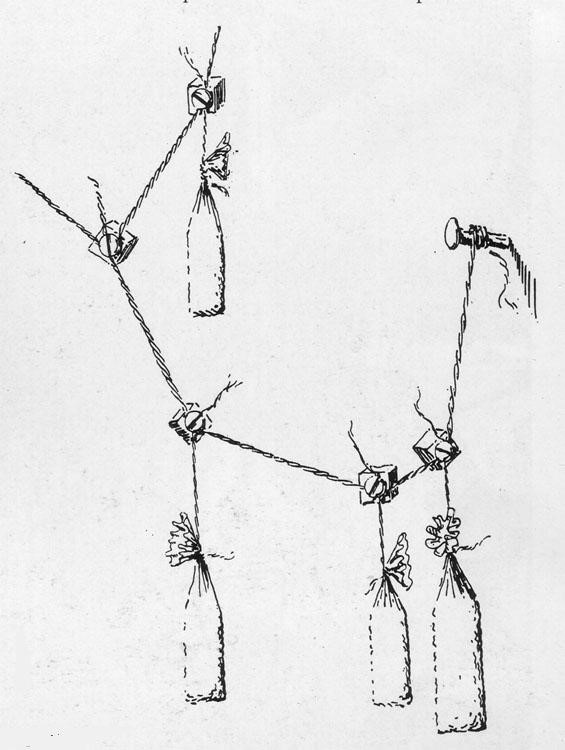 He photographed the resulting model from various angles until he achieved the exact shape of the church’s structure, knowing from the model exactly where the columns should go. Gaudí’s original model is on display in Barcelona. 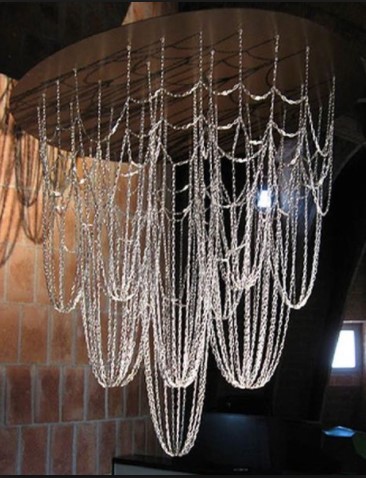 This way of working was very original, but also very costly. However, it has been so influential that even the MIT offered a workshop based on his methods.

Last year, researchers at the MIT developed a new virtual method that creates models of 3D structures. Designers can interact with it by cutting virtual strings and adding virtual weights to see how their building changes form. They can use this 3d architecture program to invent innovative shapes for the buildings of the future, where the shape of the building responds to the loads acting on it.This programme is still available

This way of working devised by Gaudí makes us wonder what he could have achieved if today’s technologies had been available to him. What would he have achieved using 3D digital design tools, and Virtual Reality for visualising, showing and feeling his work before carrying it out; 3D printing for testing and making models or even some constructive elements; drones and sensors (IoT) for observing the evolution and safety of his works, or social networks for analysing the impact of such work on his fellow countrymen. All of these tools are already available to us today, so perhaps the correct question would be: “How did Gaudí manage to do all he did without them?