The incredible construction of the Barranco de Erques viaduct in Tenerife

Adeje and Guía de Isora are two municipalities located in the southwest of Tenerife (Canary Islands). Though very close to each other, they are separated by a deep ravine, the Barranco de Erques, a protected landscape running for 13 km which is home to rock plants, balo shrubs, spurges, and pine trees at the highest point, as well as protected animal species. Archaeological remains have also be found there, together with abandoned agricultural terraces, some galleries and traces of old stone paths. 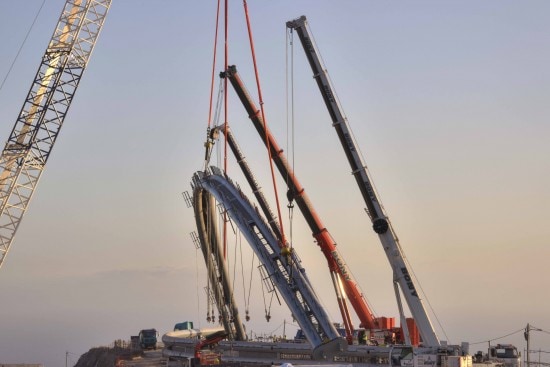 The Erques viaduct was built over this unique landscape with the aim of joining two of Tenerife’s most populated municipalities, while protecting the flora and fauna of the natural environment. This massive infrastructure is part of the new project to extend the island’s ring road from Adeje to Santiago del Teide, and a connection to the port of Fonsalía.

One very significant feature in the construction of the road is that 100% of the material originating from the excavation works was reused to manufacture concrete, asphalt, aggregate, riprap and rockfill.

After years of work, construction of this stretch of the ring road can be summarised with a few figures: it was opened on 18 December 2015, upon completion of a [inlinetweet prefix=”” tweeter=”” suffix=””]21 km stretch of road which will see journey times for the more than 10,000 vehicles using it daily drop by over 20 minutes.[/inlinetweet] 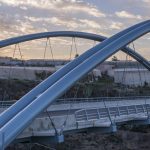 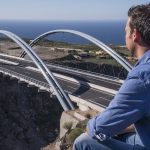 How was the Barranco de Erques viaduct built?

The Erques viaduct is a suspension bridge comprised by two arches, each weighing 120 tonnes and spanning 110 metres. When we think of infrastructures of this magnitude, we rarely reflect on how they were built. What stages does the construction project go through? How are all the different components prepared? How does it all get to the building site?

The four stages of viaduct construction

Here is a summary, in four parts, of construction of the massive infrastructure of the Barranco de Erques viaduct by the Ferrovial Agroman team.

But reading about it is not quite the same thing as actually seeing it, so here you have some impressive footage of the construction process for this project: