The Water and Sanitation in Ethiopia

Of the 102 million people living in Ethiopia, there are 42.5 million who lack access to safe water, a figure which trumps the entire populations of Argentina, Canada and Poland. Furthermore, 71 million of the country’s total population lack access to improved sanitation, with a shocking 28 million having no choice but to practice open defecation. In rural communities, there are even more issues of scarcity, thus creating a hugely detrimental effect on both the citizens and their animals. So what can we do to lower such staggering statistics?

Who are Acts Of Compassion (AOC)?

My name is Temesgen Ayele and I am the general director of Acts of Compassion (AOC). AOC is an Ethiopian Residents’ Charity that has been working to improve the lives and livelihoods of the poorest and most marginalized people in the Wolaita zone in Southern Nations, Nationalities and Peoples Region (SNNPR) since 1997.

We believe that adequate and clean water supplies are vital for healthy and productive communities.  Having easy access to plentiful, safe water reduces the risk of water-borne infectious diseases, and saves time – people no longer have to trek for several kilometers to collect water from rivers, lakes or unprotected wells. Similarly, when households lack access to sanitation and practice open-defecation the risk of bacterial infections (e.g. salmonella-typhoid, e-coli, hepatitis, dysentery etc.) and parasitic worm infections increases.  This disproportionately affects young children, for whom diarrhea is one of the biggest killers in rural Ethiopia.

In order to help eradicate these issues of scarcity, in 2013 we collaborated with Ferrovial and Intermón Oxfam to bring relief to areas who suffer needlessly. The Bolosso Sore and Soddo Zurya woreda project began in the Wolaita Zone of southern Ethiopia, in the districts (otherwise known as woredas) of Bolosso Sore, which is 300km away from Addis Ababa, and Soddo Zuriya, which is 160m from the regional city of Hawassa.

The project WASH was designed to improve the use of safe water, sanitation and hygiene services and practices of 1,394 households. Furthermore, we also wanted to educate students at 8 elementary schools on behavioural change related to hygiene and sanitation that could be practised both at school and with their families at home.

Our strategic objectives would be achieved through the following expected results:

Due to the nature of Ferrovial’s business lines, the company was able our project not just financially, but also using its expertise in the field of engineering. Volunteers from Ferrovial, Intermón Oxfam joined us to construct a water supply and sewage network in 6 wards in the Boloso Sore district and 2 wards in the Sodo Zuria district. This included the construction of 20 hand-dug wells, basic sanitation infrastructure (latrines) and training of 20 WASH committees.

As a result, the project was able to improve sustainable access to safe and adequate water within at most a 30-minute walk for 7,603 people (3843 males and 3703 females) in the intervention areas, and in addition, improve access to basic sanitation in the villages, for 100% of the rural population.

Since innovation is a fundamental part of the Ferrovial strategy, our collaboration with the company enabled us to trial an innovative new alternative to water treatment, which turned out to be highly effective. Moringa seed is used as an alternative water treatment plant for domestic water use and has also been cultivated for medicinal and nutritional purposes. Based on the recommendation of the Ferrovial team, we were able to execute a pilot study of household level water treatment using Moringa seed through the first demonstration on 20 households within a two month period in Bolosso Sore and Soddo Zuriya.

Firstly, physical and bacteriological tests before and after treatment with Moringa were carried out using water collected from both river and traditional well sources and the test result like turbidity, amount of coliform and physical measurements was different as per the amount of seed and difference on source. The results collected from target households was compared to the baseline survey data and revealed that the former water used by the target groups was coloured and infected with visible dirty materials & harmful microorganisms which could lead to different abdominal disease, diarrhea and intestinal worms etc.

Moringa, on the other hand, has the power to treat turbid water and kill pathogenic organisms. This was proven in the pilot, which demonstrated that those living in the target households using the treated water were not exposed to any diseases. Furthermore, Moringa had a great impact for its medical use,  as results showed its ability to treat urinary tract infections and influenza. 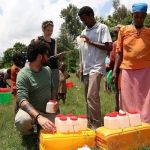 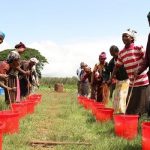 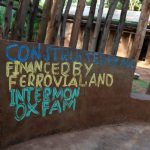 Moringa, on the other hand, has the power to treat turbid water and kill pathogenic organisms. This was proven in the pilot, which demonstrated that those living in the target households using the treated water were not exposed to any diseases. Furthermore, Moringa had a great impact for its medical use,  as results showed its ability to treat urinary tract infections and influenza.

I was delighted to see that the AOC-Ferrovial collaboration produced such positive results. In line with our objectives, citizens could now collect safe and adequate water from their residence area in a way which was less complicated and closer to home. In addition, the health status of the community was able to improve significantly through the integrated effect of hygiene and sanitation activities, particularly thanks to the Moringa seed.