Building roads under the eye of the volcano: when asphalt and lava come together

Coconut palm beaches, crystal-clear waters, thick jungle, little-known animal species, ukuleles and the spirit of Aloha… Hawaii conjures up myriad different images in our minds. However, there is one thing that we invariably associate with this isolated archipelago lying in the middle of the Pacific Ocean: its volcanoes.

The close to 400,000 inhabitants of the remotest islands on the planet have been learning to live side by side with nature at its wildest centuries. Earthquakes, tsunamis and fierce storms regularly batter the archipelago. But what really marks Hawaii’s destiny, day after day, is lava. And perhaps the best way to understand this is through its road network.

Mauna Loa, standing 4km in height, is the Earth’s tallest volcano, and Kilauea the most active, with 35 years of uninterrupted eruptions. These two are the most famous, but there are many more. In fact, the island has 20 volcanoes, both active and dormant; 30 if we also count those on the atolls and furthermost archipelagos, or 80 if we count the Hawaiian-Emperor seamount chain, of which the islands are the visible part.

Rivers of a relatively liquid lava cross the islands, destroying everything in their path and changing direction seemingly at will until they enter the sea. From one day to the next, a whole village may be cut off and all access roads buried under several metres of lava. So how do the people in Hawaii keep their road network open? How can asphalt coexist with molten rock? 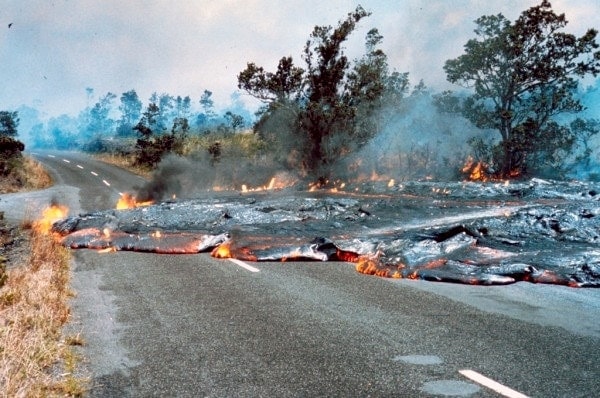 Kilauea is the second youngest of the Hawaiian volcanoes, at close to half a million years. It is also the most active and the one that has brought the greatest danger in the island’s recent history. The Pu‘u ‘Ö‘ö crater started spouting lava in 1983 and has never stopped.

Since then, unpredictable rivers of lava have been constantly flowing down the slopes and moving towards the ocean, posing enormous challenges for the district of Puna, one of the most densely populated areas on the southwest of Hawaii’s main island. Since 1983, molten rock has buried more than 200 houses here

And this is where the work of the USGS Hawaiian Volcano Observatory shows its worth. The Observatory regularly issues a report on the state of the eruption, the direction of the lava flow, its speed and the risks involved. In addition to this public information service, technical staff use cameras and sensors to monitor the eruption 24/7, and draw up risk maps based on the data recorded.

“The episode 61g flow [uninterrupted now for a year] remains active and is entering the ocean at Kamoukuna”, explains the last update available. “The flows pose no threat to nearby communities at this time”. But it was a different story in the summer of 2014. 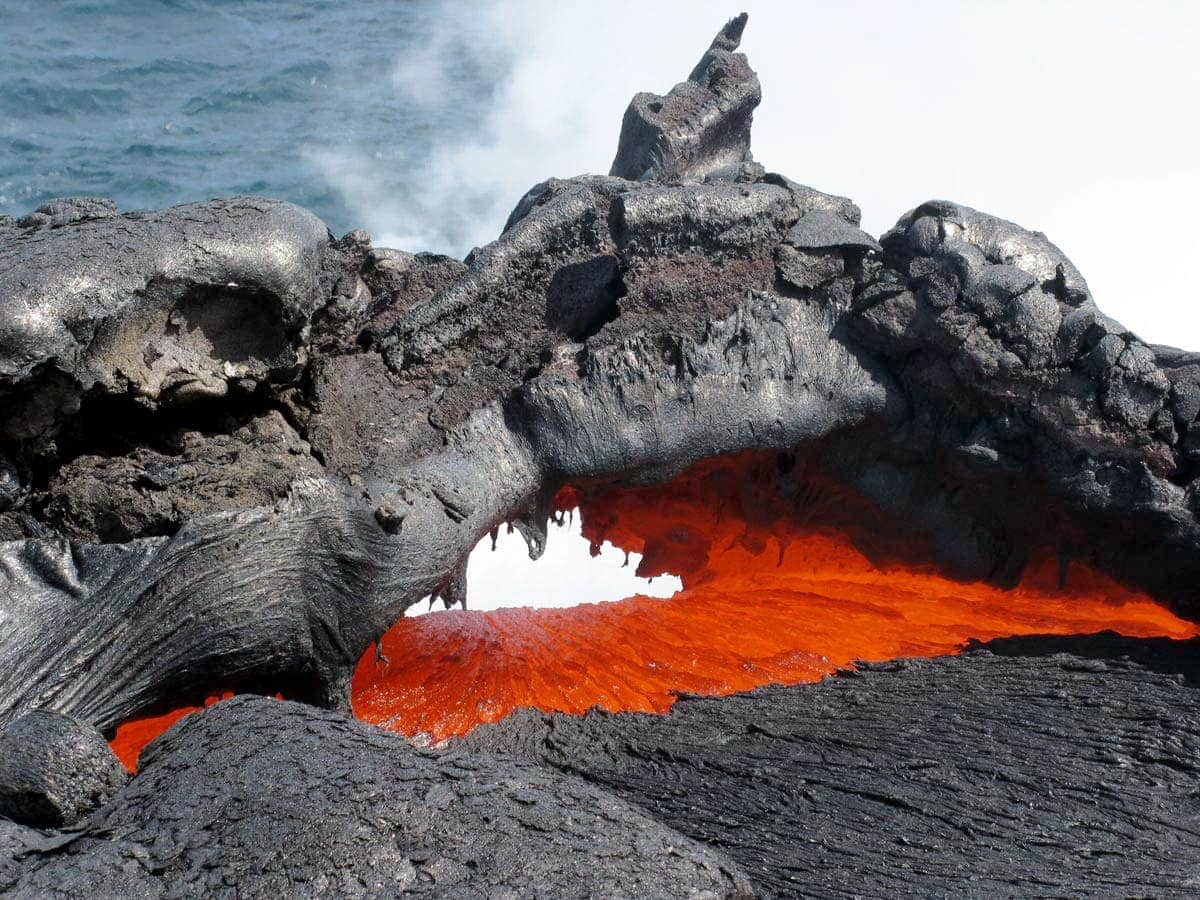 On 27th June, a new eruption of Kilauea decided to head for the district of Puna. For days it disappeared underground, advancing through some of the many subterranean volcanic galleries criss-crossing the island, only to reappear on an even more dangerous path. In September, the town of Pahoa started preparing for the worst, as the incandescent lava flow approached highway 130, used by an average of 15,000 vehicles per day.

However, the lava never made it to the main road, instead deciding to change direction at the last moment, although it did block secondary roads, now solidified as large basalt walls around the town. Despite the happy ending, the incident tested out the island’s state of emergency preparedness.

When the data collected by the Observatory put the level of risk at its highest, the Department of Transportation for the state of Hawaii gets to work. The first step is to carry out a series of tests by throwing gravel on the still hot, though no longer incandescent, lava. The aim is to measure the amount of material per square metre required for the lava to become a practicable road while solidifying.

“Protective measures to prevent or minimize road collapse are also being considered. There’s a lot of engineering behind these decisions,” explained Darryl Oliveira, Hawaii County Civil Defense Administrator, in an interview for the Hawaii Tribune Herald, at the time when the town of Pahoa seemed most at risk.

At the same time as materials are tested, the subsoil is analysed using radars to search for galleries or pockets of air that could pose a hazard for vehicles in the future. All of this must be carried out in record time, in order to plan the road and start spreading the aggregate before the lava cools completely. In the case of Kilauea, where the lava is especially liquid, it must all happen in a matter of a few weeks.

Although in the end it was not necessary to rebuild highway 130 in 2014, the same methods were used in 1986 in Kalapana, also in the district of Puna, when another episode from the same eruption destroyed a large part of the town and left residents completely cut off.

While rebuilding the main roads is priority number one and requires the bulk of the resources available, other teams work on the opening of temporary alternative routes for local residents. These projects are of a different nature, requiring heavy machinery and on occasion destroying some of the features which constitute the island’s greatest tourist attractions. 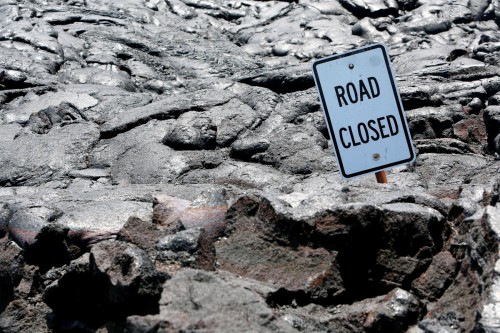 The Chain of Craters Road is one of the favourite tourist attractions in the Hawaiian archipelago. Built in 1928, this 30 km stretch of road crosses the Hawaiian Volcanoes National Park. Its history is linked to lava, and it has been closed to vehicles on several occasions, to be reopened later.

After being buried in 1986, alternative routes were built and the decision was taken not to reopen it to traffic. It was, instead, an exciting option for the most adventurous tourists. A “Road Closed” sign stuck in the lava served to deter those not so bold.

In 2014, however, in light of the risk to Pahoa, both park and island authorities realised that reopening this historic route was the only option for maintaining communications going whilst the main access road was rebuilt.

“Now is the time to take the last photos of that ‘Road Closed’ sign before it is removed. We will reopen closed stretches as quickly as possible, as soon as we have the necessary diggers available.” Statement by Cindy Orlando, park superintendent, in October 2014. 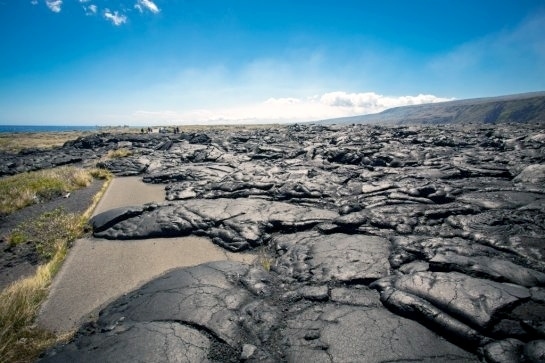 And so it was. For several weeks, heavy machinery worked assiduously to clear away the solidified lava to the extent possible, reopening a road that had been lying under a layer of basalt for 30 years. A single-track road was built around the area affected by the eruption. A short time later, with the town no longer in danger, the project was suspended.

At the beginning of time, when Pelé, the Hawaiian Goddess of Fire, decided to live in Kilauea, she challenged Kamapua’a, God of Rain, to take over the island. Conscious of the power they both held, they decided to call it a draw to avoid a battle and share the land between them. Since then, fire has implacably ruled over the south of the island. A year ago, episode 61g, still active, once again covered the Chain of Volcanoes road, thus closing this route just a year and a half after it was reopened to traffic. Kilauea and Pelé had again claimed back what was theirs.