A brief history of bots: from entertainment to virtual help

Conversational bots are in style. You just have to look at companies like Google, Microsoft or Amazon, all of which invest in the development of a technology that simulates a conversation between people, automatically and coherently responding to the issues it receives, either in spoken or written form.

The software that gives life to the bots, also called chatbots, relies mainly on two technologies: artificial intelligence and language processing. The combination of both makes it possible to recognize a series of words or expressions and respond using previously prepared phrases. In this way, the bot is able to follow the conversation and answer in a natural way.

Since conversational applications are a current trend, it may seem like they are a new thing; however, that’s not the case, they go back to the beginnings of the computer itself. We take a look at the history of bots..

In 1950, British mathematician Alan Turing ,the forerunner of modern computing, proposed a theoretical test that considered the ability of machines to show intelligent behaviour, advancing the idea that they would be able to think one day. The test does not evaluate the machine’s ability to respond correctly, if not to generate responses similar to those given by a human. 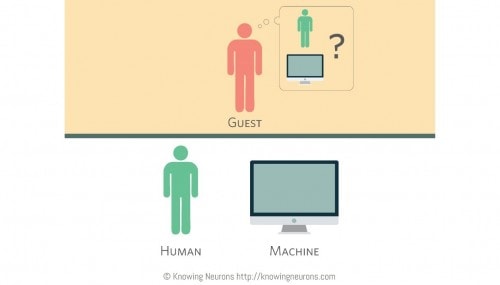 Standard interpretation of the Turing test: the guest has to determine which element is a computer and which is a human being based solely on the received responses to written questions. Source: Knowing Neurons

Turing’s work inspired a multitude of computer scientists, including the German Joseph Weizenbaum of MIT, who developed the ELIZA program in 1966 with the intention of users thinking they were talking to a real person.

ELIZA: the first bot in history

Initially developed as a parody of the first interviews held with certain psychotherapists, ELIZA was designed as a tool to show the superficiality of communication between people and machines. Thus, it used a sequence that recognized keywords and generated a response, usually in the form of a question about how the subject in question made the user feel. 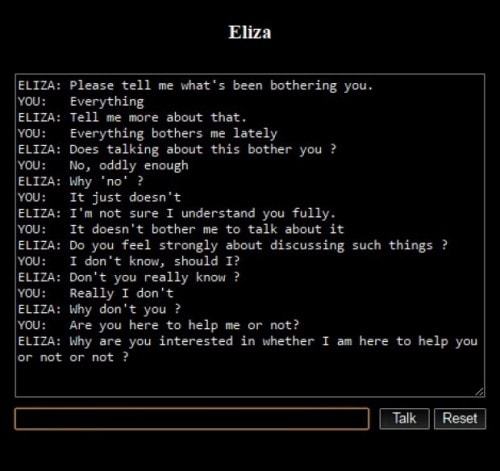 Professor Weizenbaum found five critical points to be solved in order to ensure the proper functioning of his program: identification of keywords, discovery of a minimal context, choice of appropriate transformations, generation of adequate responses and the ability to react to the absence of critical words.

The myth claims that ELIZA, named after the street florist who was the protagonist of the book Pygmalion (George Bernard Shaw, 1912), adapted to the theatre as My Fair Lady, was able to pass the Turing test. This statement is somewhat risky and leaves room for debate, but what is certain is that many people thought they were talking to a therapist and shared intimate details of their lives.

This first bot was inspiration for others that developed later, such as ALICE , Mitsuku , Albert One and SmarterChild, which was one of the most popular.

From SmarterChild to Virtual Assistants

SmarterChild, developed in 2000, stood out for its ability to process language, understanding and responding in a natural way to the issues raised. However, it was also the first bot to give assistance to users, and was capable of providing information on topics as varied as movie times, weather forecasts and sports scores. 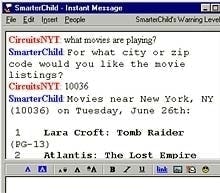 Compatible with instant messaging services like AIM, MSN Messenger, AOL Instant Messenger and ICQ, it brought artificial intelligence closer to millions of users, in a sense being the forerunner of current virtual assistants such as Apple’s Siri, Microsoft’s Cortana or Amazon’s Alexa.

How far these bot-based services can evolve is something that remains to be seen. An example of this is, in the world of fiction, the experience of Theodore Twombly, a character played by Joaquin Phoenix in the film Her (Spike Jonze, 2013).

This is one of the technologies that is currently being worked on at Ferrovial’s Digital Hub. In particular, a pilot initiative, Qo, has been developed in collaboration with the Talent Directorate to facilitate the development of the company’s employees using this artificial intelligence tool.