The Aviation Sector: much more than flying

There is no doubt that nowadays airports play a key role in connecting the world, letting people, businesses and countries get closer together. However, their role goes much further, being also strong engines of economic business and social development that together generate a high added value and a considerable impact on society especially relevant in the regions they are located. 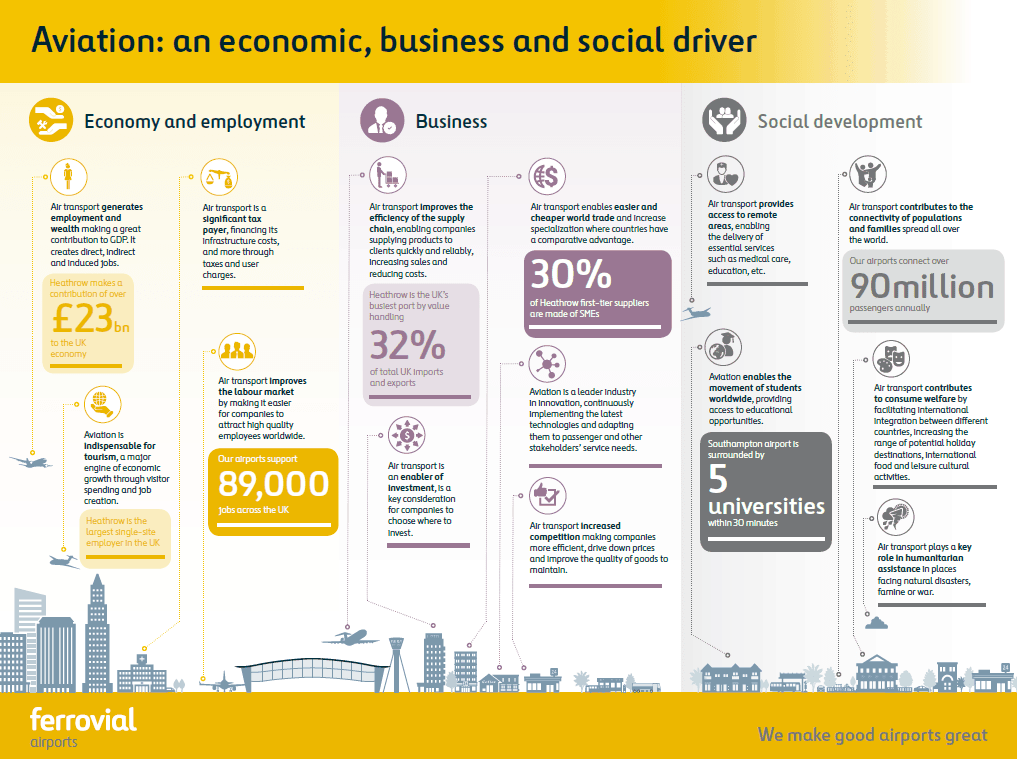 Moreover, this contribution seems to be maintained not only over the next few years, but will increase substantially. In fact, according to ACI’s World Airport Traffic Forecast 2016, global passenger traffic is expected to double by 2029, exceeding 14,000 million passengers annually, implying an annual growth rate of 5.2%. On the other hand, in terms of air cargo volumes, it is estimated that by 2025 airports will move around 2.4% more per year.

The economic impact of our assets

As long-term investors, Ferrovial Airports aims to work continuously to improve passenger service and, at the same time, improve the economic and social environment in the places where our assents are located.

Heathrow Airport in particular is UK’s busiest port by value handling 32% of total UK imports and exports. Over the past year, the airport made a contribution to the economy of the United Kingdom worth 23 billion pounds, which shows its specific weight in the economic development of the country.

In addition, the set of airports in the portfolio of
Ferrovial Airports, make a very significant contribution to the generation of employment, employing a total more than 89,000 people. In the case of Heathrow, the airport is in fact the UK’s largest employer in a single location, and currently 22% of its team comes in addition to one of the five municipalities surrounding it; a figure that equals, nothing less than 1 in 5 members of the active population in these areas.

Another example would be that,  following the choice of the Heathrow expansion as the best option to strengthen the airport capacity of the country, the British Government has confirmed the estimates of Heathrow and the Airport Commission that this project will create up to 180,000 new positions in the country and up to 10,000 training scholarships.