The stairs prototype developed by researchers at Georgia Tech and Emory University in Atlanta uses some of the energy that a person dissipates when they step down to provide an “assisted ascent” using that same energy. According to the researchers, their ladder dampens the impact produced during the descent while reducing the effort required to go up them again.

How do they work?

The mechanism consists of a series of mechanical springs that are located on the spring loads of the steps, individually. When the steps give way under the weight of someone going down the stairs, the springs absorb part of the dissipated energy when containing the descent. This reduces the load and dampens the force exerted on joints like knees and ankles by up to 30 percent, according to the researchers. “Going down stairs is like using a car’s brake while accelerating the engine,” says Lena Ting . “To avoid going down too quickly, legs contain some of the energy that is exerted while going down each step.” Lena Ting is a professor of biomedical engineering at Emory University and Georgia Tech, and has been involved in the development of the stairs.

Therefore, while going up the stairs the opposite happens: pressure sensors located in the steps detect the step and release the mechanical springs. The springs extend and release the stored energy, pushing the step upwards. The step’s vertical movement propels the person, facilitating the ascent by reducing effort required by up to 40 percent compared to a conventional staircase.

The only apparent disadvantage is if someone who does not require the assisted ascent goes up the stairs first and the “discharge”, although this could be solved by modifying the activation system of the steps or configuring it to activate only for a specific person; for example, adjusting the pressure sensors to a specific body weight. 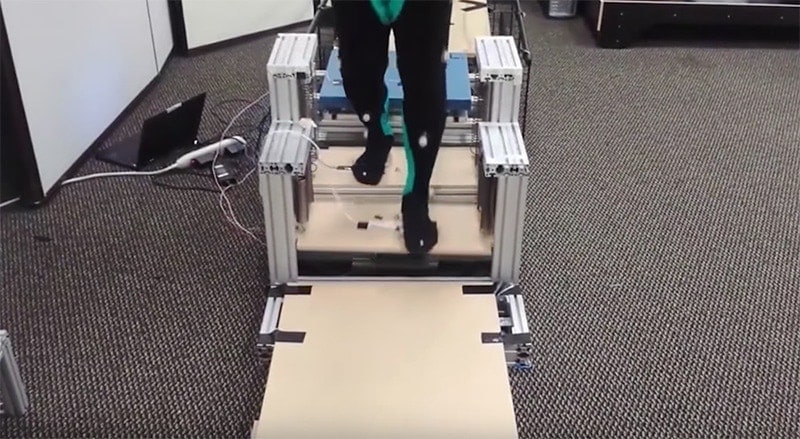 Springs are loaded with the weight of the person who goes down the stairs. Image: Georgia Tech

An easy solution to incorporate in conventional stairs

Body weakness, difficulties walking, and maintaining balance are among the main causes of falls on stairs. The most affected people are usually elderly people, people with reduced mobility, convalescents or pregnant women. Specifically Karen Liu , another professor who was involved in the development of the stairs, was inspired by the idea of shoes that store energy in the sole when taking a step and that freed her when walking and in the difficulties that her mother has in climbing stairs. “Liu knew that her mother, who had trouble climbing stairs but was able to walk fine, wasn’t going to put on special shoes just to go up and down stairs, so she decided that the stairs should work in the same way as those shoes,” Georgia Tech researches explained .

One of the main advantages of the mechanism for assisted ascent is its low cost and relative technical simplicity, which enables it to be installed on already existing stairs even temporarily and in homes. “The solutions that exist to assist people who need help with stairs (such as elevators and stairlifts) are not very affordable and often their installation is not practical in homes, especially when they only need to be used temporarily.” Instead, according to Researchers, these low-cost, easy-to-install assistance stairs can help people with difficulty climbing stairs maintain the ability to use them and remain independent without having to give up their home.