5G mobile technology is coming to cities, roads and highways

The fifth wave of mobile technologies, known simply as 5G, is still a few years away, although it is already at the proposal stage, with standards being defined. It will be fully rolled out from 2019-2020, but several pilot projects are already running, and tests began on some potential technologies in 2016 in Finland, China and several other Asian countries.

London is also running a pilot project since last year. And in Spain, Telefónica has started to use the technology in January 2018 in «living laboratories» in pilot cities such as Segovia and Talavera de la Reina. The aim is not to lag behind and understand in the field how this technology can affect different elements in the various businesses: infrastructures, users, vehicles or any other.

There are two basic characteristics of 5G that users will perceive: speed and low latency. Speeds will be hundreds of times higher, or even a thousand times higher for certain applications. Latency will be reduced so as to be basically imperceptible. This is the technical term that refers to the ‘delay’ experienced by signals travelling over the web. In other words, device responses will be almost instantaneous, at something under 5 milliseconds, and ultraquick, at up to 10 gigabits per second.

All of this will be achieved using a network of smaller but denser telephone cells, using different bands of the radioelectric spectrum than are used today. Which means that aerials will need to be adapted, as will buildings and other infrastructures. And there will be advantages, such as improvement in accuracy in triangulation and differential GPS (using fixed signals, in addition to the conventional GPS satellites).

Working groups in all areas

The 5G Infrastructure Public Private Partnership (5G PPP) is one of the groups on which the European Commission is working together with operators, manufacturers and service providers. Some of the ambitious aims set in relation to infrastructures are:

The implications of higher speeds and improved latency are key for the transport and automotive sector. It means that cars, lorries and other vehicles – both conventional and driverless – will be able to connect to the network and transmit much more information than currently. Additionally, lower response times will allow remote control and improvements in autonomous driving.

The 5GAA (5G Automotive Association) group brings together vehicle manufacturers and operators and focuses on cost-benefit analysis of these technologies and proposals, as well as tests on the different related standards (such as 802.11p for short distance communications between vehicles).

In addition to improvements in speed and latency, chip manufacturers such as Intel or Qualcomm point to vehicle-to-vehicle (V2V) connectivity as another key element of 5G technology. Intel has already developed a specific platform called Intel Go for automated driving on roads and highways using 5G networks. The idea is that by collecting a much larger amount of data, autonomous vehicles will improve; if such cars can be connected to the Internet ‘cloud’ servers from any point of a road or highway, automated learning will grow and vehicles will receive warnings and instant information on their surroundings, even when they cannot ‘see’ what is happening with their cameras. 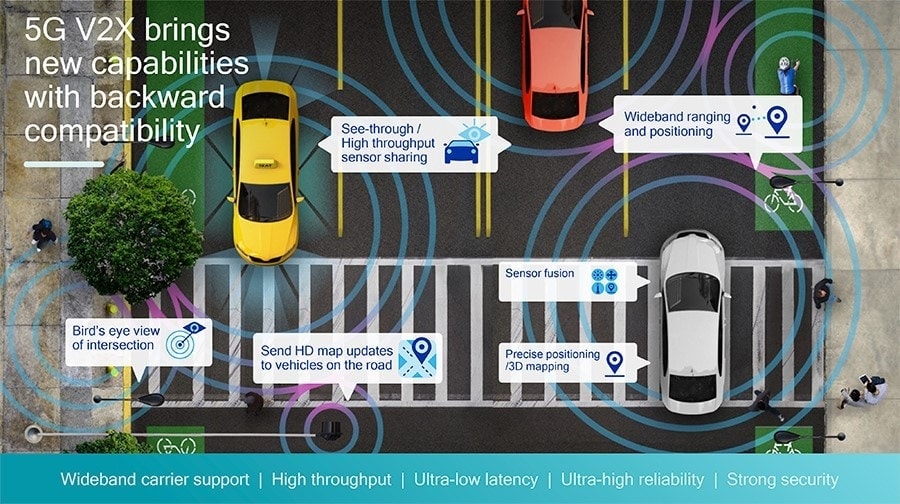 Other manufacturers extend this idea to communications with other infrastructures, such as vehicle -to-road (V2R, V2I) or even vehicle-to-everything (V2X) communication. Qualcomm, for example, envisages that 5G V2X will offer new possibilities such as:

Some people believe that 5G will see a return of new formats for old business, in addition to some new ones. For example, to date nobody had thought that offering high quality broadband communications to millions of car, bus and train passengers – a sort of mobile Netflix with none of the problems of cover, faults and disconnections that occur today – could be a profitable business. So it would not be strange to see this as an option on highways and main roads in the near future.

The greatest challenge to 5G is financial: network operators need to find a balance between installing many new 5G communication cells and doing it in a cost-effective manner. Given that this network may coexist with today’s 4G and 3G networks, the transition will probably be easy, and we will gradually find more densely populated and communicated areas (cities, highways, railway lines) in which 5G brings us closer to the most advanced technologies of the future.