These five countries have no airport (because there’s no space)

Airports have become symbols of both economic and social progress. Wherever aviation takes off, prosperity and urban development follow a few decades later. As a means of transport, it has advantages that other means simply cannot offer. The speed, distance and connections that planes and airports provide are unmatched.

Which is why it is so rare to find a country without an airport which instead uses other types of transport such as boats, trains or cars, for example, to solve its mobility needs. But there are a few countries in the world where there is simply no room for airports, and we’ll talk here about five of them. Monaco, San Marino, Andorra, Liechtenstein and the Vatican are States without airports.

Where is the Monaco airport? 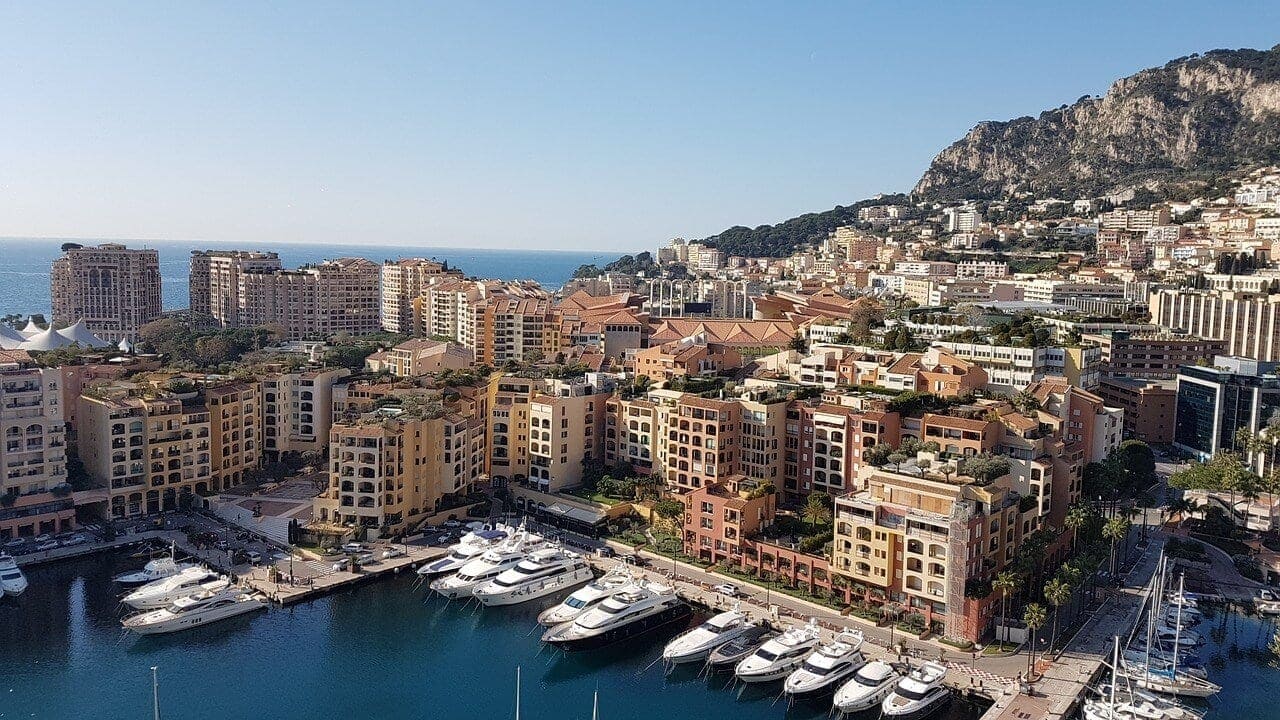 A search for ‘Monaco airport’ on the Internet brings up Nice Côte d’Azur International Airport, an airport with links to more than 86 countries which is actually located in the French Riviera. Where, then, is Monaco airport? There isn’t one.

The Principality of Monaco is communicated with the rest of the world via railways running along the French coast; through its large harbour receiving many of its goods; and by car along rather bendy roads. And, of course, not to forget TV ‘communications’ with its Monte Carlo Circuit, where Formula 1 and Formula E competitions are held.

It is a truly small country, with a population of less than 40,000 and an area of barely 2 km2. Its borders total only 6 km, with a length of only three kilometres. In other words, there is no space for an airport, not even a small one, unless the population were to decrease drastically to half of what it is now in order to allow the construction of a very limited airport. Where it would anyway be very complicated to land.

Monaco has solved the problem of not having an airport by signing an agreement with the neighbouring city of Nice, 30 minutes away by car and slightly more than five by helicopter. Yes, an aerial connection between Nice and the Principality of Monaco, although it doesn’t exactly come cheap. So most flights finish off with a car or bus trip to reach this small country.

Which is the closest airport  to Vatican City State, the smallest country in the world? 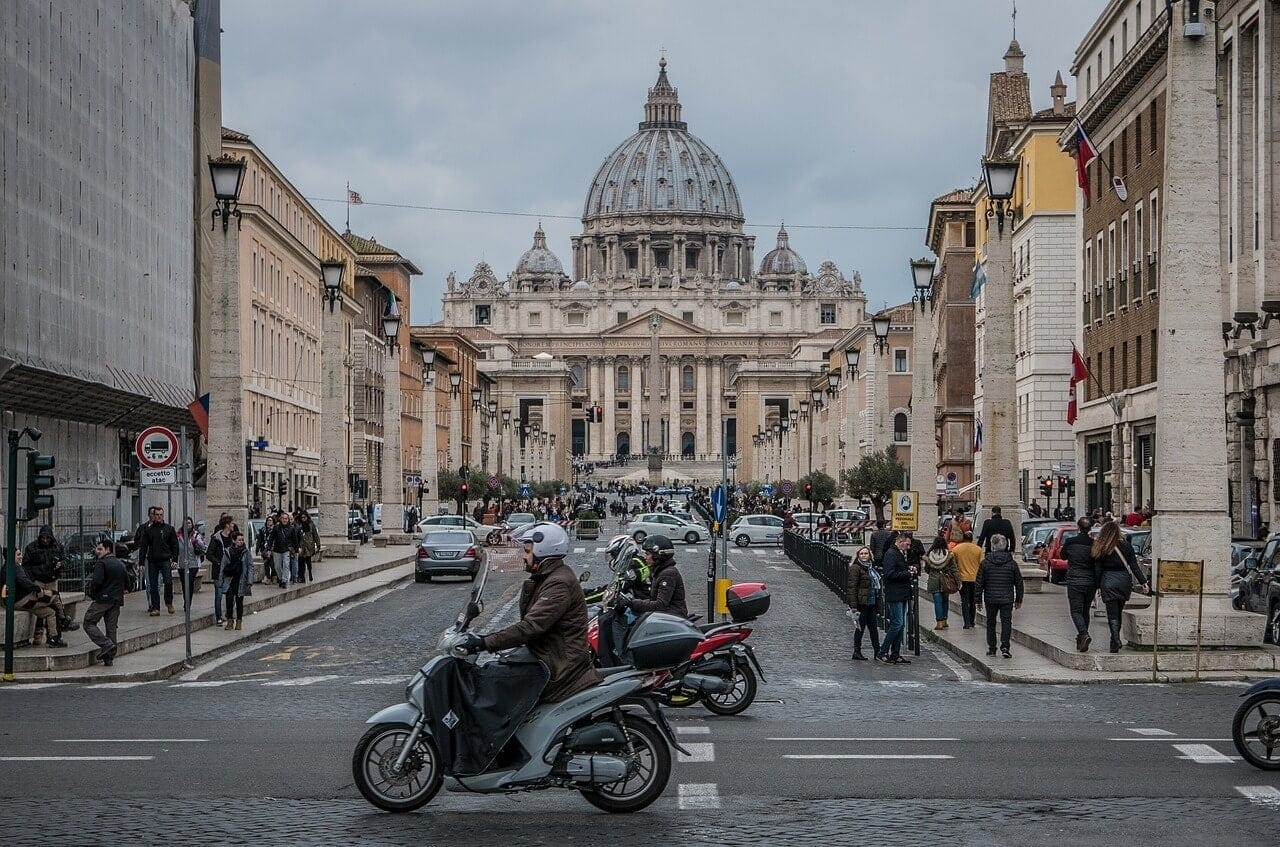 If Monaco is small, then the Vatican is even more so. It’s the world’s smallest country, with an area of just 0.44 km2 and a population of only 800. Excluding St Peter’s Square, where a light aircraft could land if it was very careful (and if it had the necessary permits, something which would be impossible), there isn’t much open space.

Nor is there any sea, nor rivers, for an alternative form of transport. The Vatican City is, in fact, in the centre of Rome. And it is one of the few countries where access is almost exclusively on foot. That said, entrance is free, up to a point, given its interest as a tourist destination.

However, its isolation is compensated by the other airports that surround it, such as Fiumicino and Ciampino, less than 30 minutes away by train. It also has rail links with Pisa, Naples and Florence.

None of those trains, however, actually reach the Vatican City, which doesn’t have railways or bus stations (the latter are on its perimeter). If we want to get there by plane, we’ll have to go through some transport hub to get the underground, a bus or a taxi.

Which airport can you use to fly to San Marino? 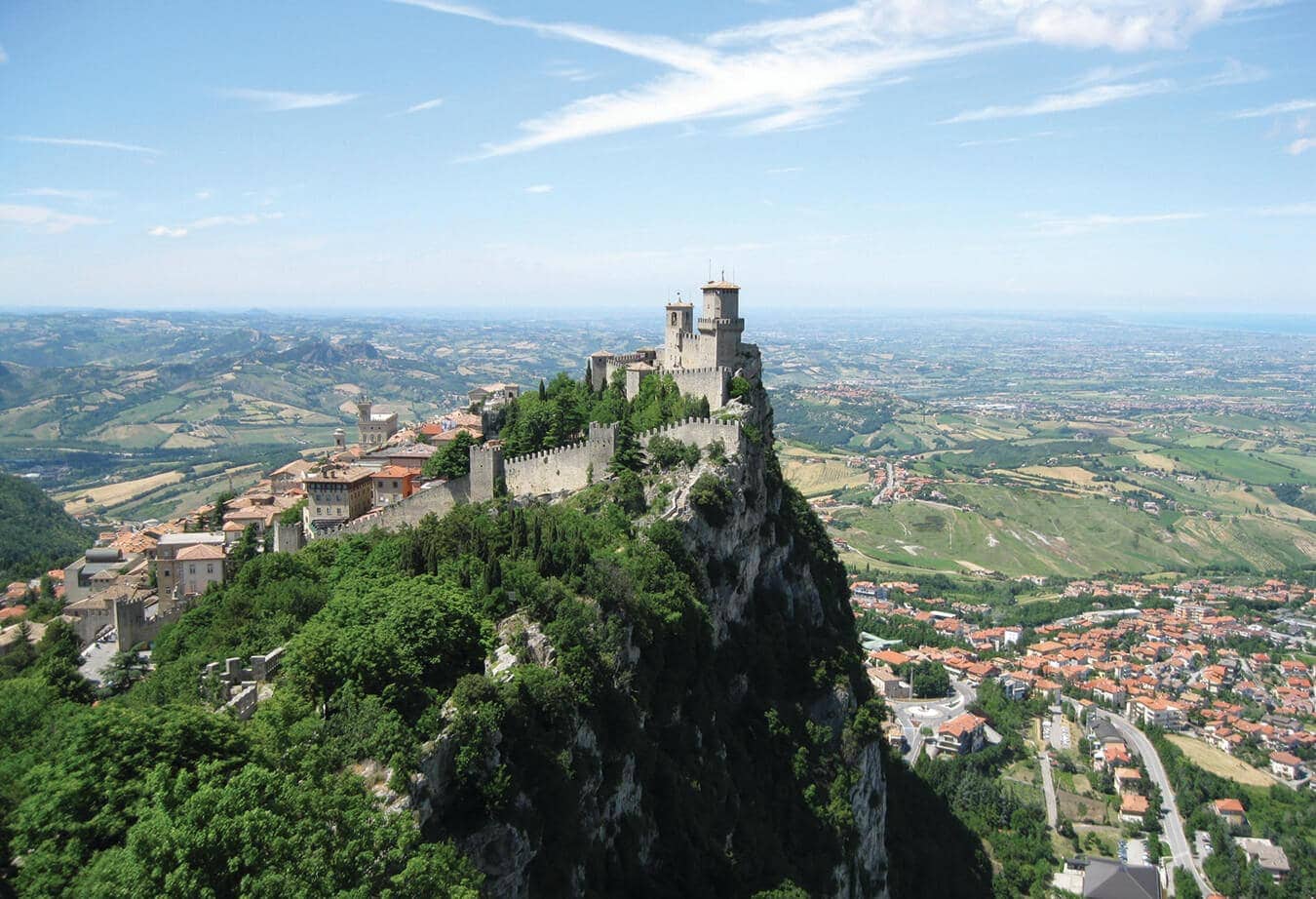 Not far from Rome and from the Vatican City is San Marino, the oldest state in the world. Completely surrounded by Italy, it doesn’t have access to the sea. It is so small (less than 40 km in perimeter) that it does not have an airport. Mount Titano, though not very high, is entirely contained within the country.

Luckily for the population, the whole of San Marino is relatively flat, and a dense road network leads out of San Marino and into Italy in all directions.

One of the closest airports is that of Rimini, in the Italian municipality of the same name, just 16 km away. San Marino may be small, but it is very well communicated. The airports of Bologna, Florence, Pisa and Venice are close by and are often used both by the locals and by tourists visiting the country.

Which airport is the best to fly to Andorra? 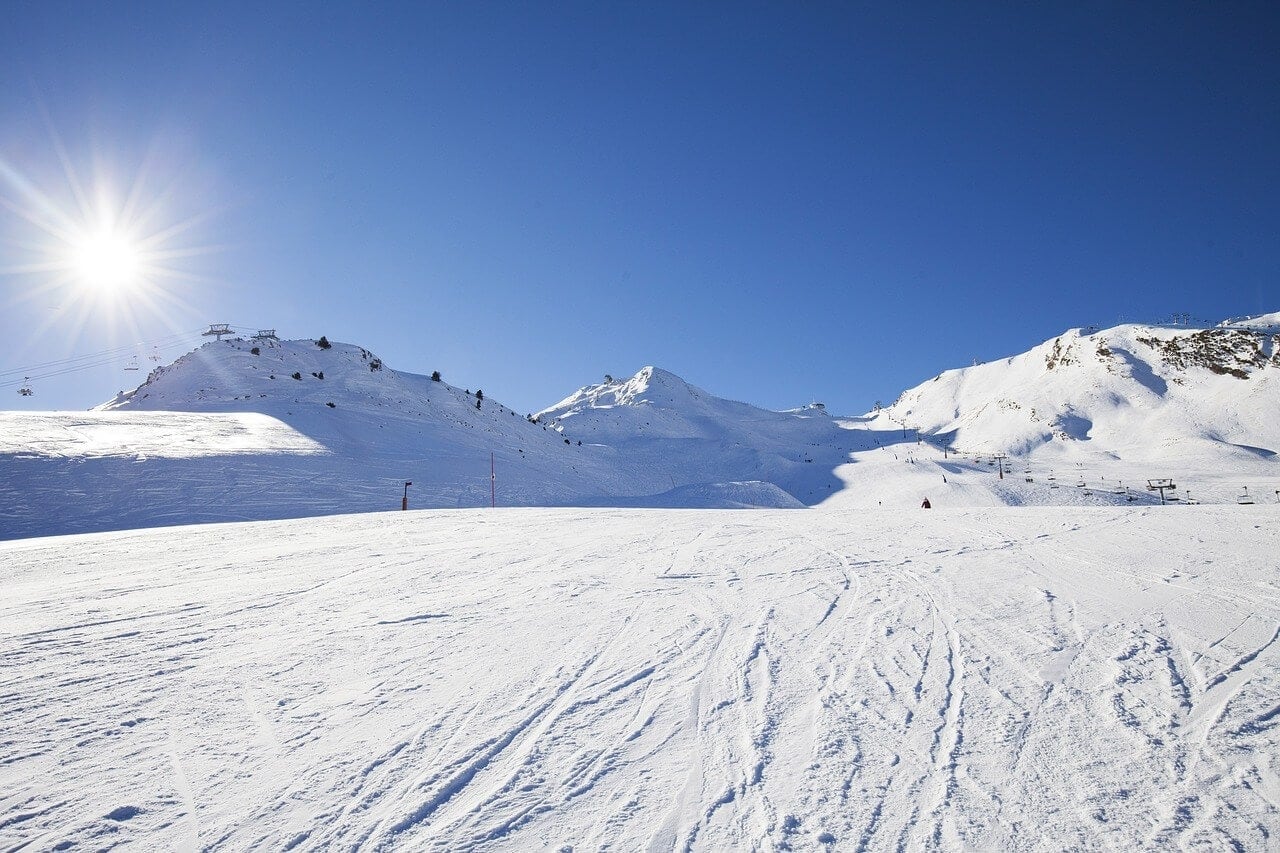 The Principality of Andorra is not as small as the other countries we have just visited. Although it has twice the population of Monaco, its surface area is hundreds of times larger, at 468 km2. You would think that Andorra could have not one, but several airports if it wanted to, but the problem here are the mountains.

This co-principality is located between Spain and France and isolated from the rest of Europe by the Pyrenees, which surround it completely. Peaks of close to 3 000 metres form several valleys, communicated with each by means of three roads and a series of paths. At such altitudes, modern aviation is difficult and dangerous, especially adding mist or ice to the equation. Andorra has therefore resorted to a fall-back plan for landing.

Some 30 kilometres down the N-260 road, in Catalonia, is Andorra-La Seu Airport, near Seu d’Urgell. This airport isn’t at huge altitude, just 800 metres above sea level, and has a flat area of land on which it is built.

Other visitors to the Pyrenees take flights to cities such as Lérida, Tarragona, Barcelona or Girona, a network of airports within a 200 km radius. Andorra may be isolated, but it’s certainly worth the car trip from the plane to enjoy the views, or to go skiing.

Where is the the Principality of Liechtenstein airport? 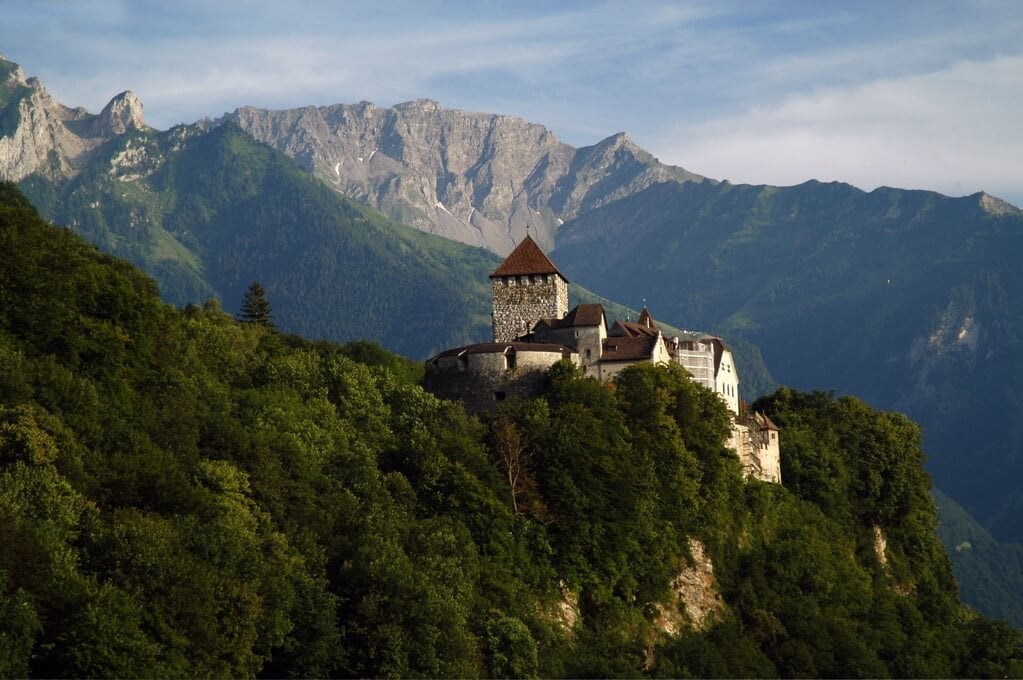 Another principality, not quite as steep, but smaller and with more hills, is Liechtenstein, with an area of some 160 km2 and a population of close to 40,000. It is only a few kilometres long, and its entire perimeter barely stretches to 75 km.

Although most of the landscape isn’t as white as Andorra’s, nor as abrupt, Liechtenstein only has a small plain north of the town of Schaan which is used as farmland. The rest of the country is high hills, or low mountains.

Due to these space limitations, if Liechtenstein wished to build an airport, it would very likely fall partially over the Rhine (and Switzerland) to the east, and the mountains (and Austria) to the west. To solve this potential diplomatic issue of invading neighbouring countries, locals use bus or car routes to reach Zürich Airport, about 120 km away.

These small countries have shown that having their own airport isn’t always necessary, and that they know how to share resources with their neighbours. Having said that, they don’t have much choice, as an airport literally doesn’t fit within their borders.