How will technologies such as augmented reality affect working environments in airports? With ever more striking developments, such as  Microsoft’s HoloLens glasses and the availability of an increasing amount of data, some experimental developments seem like something taken straight out of science fiction. A good example of this is the way in which specialist air transport technology company SITA has, together with Helsinki airport in Finland, developed an experimental model for airport control centres.

Seeing reality in a diferent way

Microsoft’s glasses basically allow you to combine images from the real environment with 3D-generated images, for example a work desk with a computer-generated 3D object sitting on it. This technology is generically known as augmented reality or mixed reality. The glasses are fitted with location and movement sensors, so that if the person wearing them moves his or her head or walks around the table, the image changes accordingly: the feeling is, quite simply, that the virtual 3D objects are actually there.

And then there is visualisation from data provided by the airport information systems. Here we’re talking of control centres, from which all the logistics surrounding passenger arrivals and departures to and from the different terminals, security controls, assignment of boarding gates, halls, baggage reclaim belts, trolleys, shops, etc., is organised. And to this visualisation useful information such as weather forecasts or special requirements, like passengers with reduced mobility needing a wheelchair, can be added.

All of this information is usually available on screens in a giant hall full of computer monitors: something we’ve no doubt seen hundreds of times in traffic control centres, trains, or stadiums and convention centres. But this new technology renders the whole environment and all the information in 3D. A kind of virtual airport, the size of a huge model, but live.

Large amounts of data, but easy to taken in 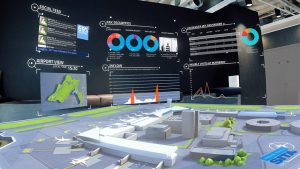 All airport systems have information flows integrated in a business intelligence system. Helsinki airport uses a software called Day of Operations BI which basically monitors and manages everything that happens at the airport. This generates a huge flow of information, which is used to create the image. In addition to this, the system can predict specific needs based on historical data, such as for example, calculate the length of queues likely to be formed based on passenger inflow, or suggest the optimum number of check-in desks or security checkpoints in operation.

The data from this diary can be summarised and “distilled” on easy-to-understand panels: which is what a person wearing the HoloLens glasses can see, in the form of virtual screens which appear to float in their line of vision over a 3D model of the airport. This includes detailed information on all commercial flights (code, number of passengers, estimated schedules) and on the airport facilities (waiting times at security control, number of people, etc.).

The colour of the halls and passageways of the airport itself changes depending on how busy they are: the more people, the warmer the colours become (red), whereas when it is quiet, with fewer people, the colours turn to yellow or green. In this way, operations can quickly focus on areas of a particular colour without having to mentally calculate passenger flows from figures in a table.

Working with HoloLens glasses in this mixed reality environment also allows you to carry out actions by simply moving your hands in the air, or by performing certain gestures. In this rather theatrical way, you can request support services for certain facilities (shops, security controls, departure lounges), assign departure lounges or request specific services, such as sending a ground hostess with a wheelchair for a passenger (this information also appears on the label which the system shows for every arriving flight).

In airports already equipped with check-in robots (which are a mobile version of self-check-in kiosks), these systems could be used to send such robots from one area of the airport to another in order to speed up self-check-in operations. As airports modernise and upgrade, this will ultimately lead to more agile and more efficient operations in the long term, for both passengers and ground staff.