The role of agriculture in Portugal’s circular economy

Reduce, Reuse and Recycle, the three “Rs” in sustainability, are also at the heart of the Circular Economy

It’s no secret that reuse is a practice that has been around for many years. Our ancestors already practiced it in agriculture. Reuse of organic matter, such as animal manure, was a practice used even longer ago. Organic matter is an essential component of fertile soils, affecting their physical, chemical and biological characteristics, and being an essential requirement for a healthy environment.

Soils on its way to infertility

Without organic matter, there would be no soil. This basic principle for recycling and reuse is one of the paradigms of modern-day agriculture, which must meet two requirements which are not necessarily at odds with each other:

In recent years, soil fertility has been decreasing, due to a decline in the reuse of organic matter, and there are as yet no known policies or measures in place to revert this trend.

If we consider that, according the to FAO, soils should have a minimum content of 2% organic matter, we find that around 50% of all soils (in Portugal at least) would not even be able to be considered as such. Added to this, our soils are at a high or very high risk of desertification. 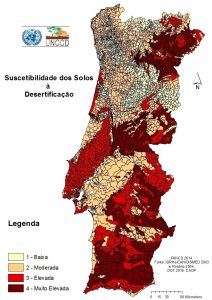 This decrease is directly related to the soil and climate characteristics of Mediterranean countries, where exposure to the sun is greater and rainfall is relatively low (and generally concentrated in two to three months of the year). If to this is added the fact that areas covered in vegetation are also limited, the mineralising effect of sunlight increases.

Biosolids, the most sustainable fertilization solution

It is therefore essential to develop soil conservation policies, which will need to include a requirement for increasing the content of organic matter in such soils. And this is where controlled application of the slurry obtained from water treatment (biosolids) comes in. The use of biosolids as fertilizer or soil improvement material is a well-known and well-used practice in developed countries, and is one of the most sustainable solutions on three levels:

The use of biosolids as fertilizer or soil improver is today and in the medium term the most appropriate way of managing this type of waste. And this is the paradigm of the circular economy. Creating wealth and reusing what would otherwise simply be waste.

Remember that the soil is a non-renewable resource on a human scale.

“In Nature, nothing is lost and nothing is created, everything is transformed”