Preparing our Highways for AVs

It is expected that almost half of new cars sold by 2030 will have some form of automation, level 3 or above. In the scale of automation systems from L1-L5 (see image below), Level 3 means that the car will be able to drive by itself, but the driver will have to remain in the driver seat and close to the steering wheel to take control during the more or less frequent disengagements in which the autonomous systems will not be able to maneuver with a guaranteed level of safety. Level 4 is a giant leap forward in which there may be a steering wheel but only for exceptional circumstances, and for Level 5 it is assumed that no steering wheel will be needed.

If/When these predictions become a reality, conventional vehicles will have to coexist with connected vehicles (those that receive messages from other cars, from  external data services or from the infrastructure in real time) and with autonomous vehicles that will likely also be connected.

If that is the case, the question is how do we prepare our infrastructure to maximize the benefits this could bring in terms of safety and traffic flow from a technology perspective, but also from a physical perspective?

How to Prepare our Infrastructures to CAVs

On the technology side one could envision better and more relevant data through sensorization and better communications in real time with and between all drivers. These systems will be almost seamless for the driver, thanks to small size of IoT devices, edge computing, cloud systems and telecommunications antennas and radios, which will be almost unnoticeable to the naked eye.

The infrastructure of the future, and by that we are not only talking about new roads but the necessary retrofitting of existing ones, should be conceived from the agencies’ drawing boards to be future-proof and incorporate not only classic repaving and rehabilitation of bridges but new designs that incorporate new standards to maximize safety and sustainability, considering the new types of users and the new technologies at our disposal.

Different efforts are underway to enhance current regulations and guidelines to support the new types of users of our roadways. Different actors are recommending changes to the Manual for Uniform Traffic Control Devices in the US, and others are beginning to establish frameworks and protocols for connected driving. These changes are now based on research both on human drivers as well as on automated driving systems.

As with aviation safety, we will not be comfortable with systems that work 99.5% of the time, but could entail safety issues the other 0.5%. To boost the airline industry by providing comfort to all users,  new redundancies and supplementary systems (weather forecasting, communications, traffic control) have been implemented over the past few decades in such a way that any flight incident is now seen as  an extraordinary, really abnormal circumstance that passengers don’t even consider when using those services.

By contrast, car crashes are the norm, and the tens of thousands of car crash fatalities every year in the US worry parents and family members almost every time someone gets on the road for an extended period of time.

New technologies can bring road safety standards closer to airline industry safety norms with the development of the right regulations for safety redundancies.

In broad terms, AV driverless systems (also known as ADAS) are being designed to work with maps of the roads and roadside elements they can expect, and with smart onboard sensors such as lidars, radars, cameras etc. to let them know what is actually happening in their surroundings. All those systems run on artificial intelligence algorithms that can be trained over time to identify other vehicle’s maneuvers and other elements. They even can be trained to react in the same way as humans do. The problem is what to do when things change and when unexpected situations occur that perhaps could not be properly calibrated beforehand.

New regulations are beginning to consider these situations. One may think is premature when AVs are in the early stages of development, but considering the speed at which regulations change, it is better to get started and adjust as technology evolves rather than waiting until accidents do occur.

In terms of the physical infrastructure, AVs benefit from wider, brighter lines and markings. And so, it is expected that new standards will recommend an increase in the width of white markings to 6” on all freeways, to 8” where 4 or 5” are used, and 10” where 6” lines are currently used.

Other current recommendations include: 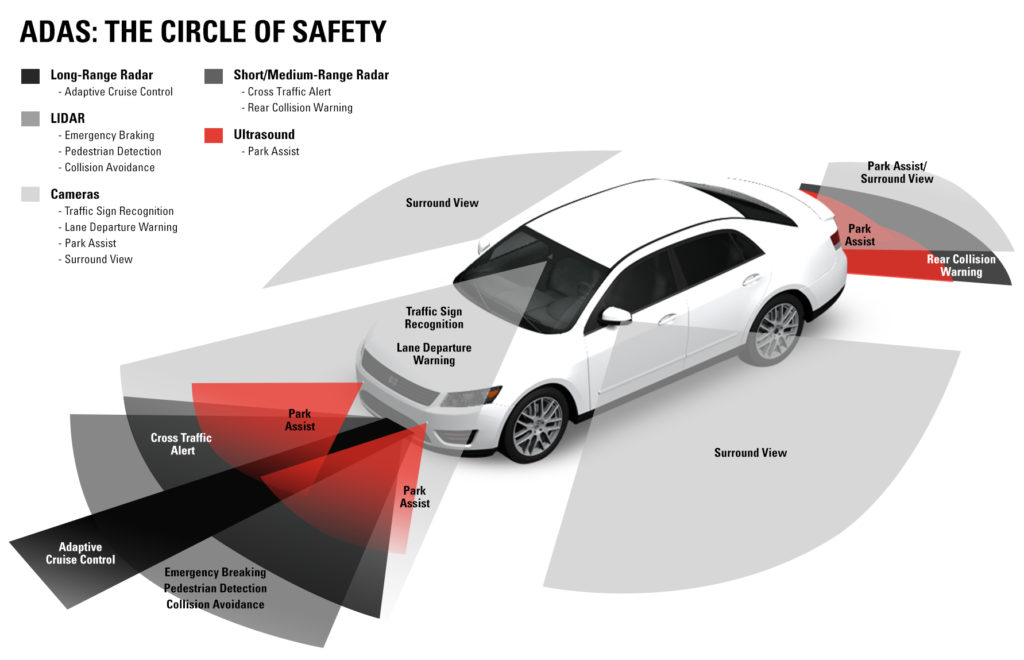 However, one of the key recommendations to aid ADAS systems to perform safely is consistency, and for that, proper maintenance and swift response times to remove or correct abnormalities or obstacles on the roadway is essential.

One illustrative example with road markings could involve a perfectly placed white line, that due to an accident gets interrupted for 50-100m due to break marks or other residue. It is in those discrepancies with the expectations in their internal mapping where automated systems need to make split second decisions with potentially fatal consequences. Hence the need for quick reaction time and the implementation of other redundancies, from the infrastructure or elsewhere, for those situations in which the ADAS finds abnormalities and is more likely to disengage.

Digital Twins to accelerate that training in unusual circumstances and additional support to safely maneuver vehicles that have disengaged are areas where third parties can help to accelerate the adoption of these new type of vehicles.

A special case is Temporary Traffic Control (Work Zones). Channelizing devices are recommended to be at least 8 inches wide with retroreflective material for reliable machine detection in all weather conditions.

However, the anomaly that any lane closure entails, particularly those that are temporary and don’t warrant repainting the pavement, forces us to think of a way to better communicate where these lane closures occur. Larger traffic cones are an option, but other systems and connected technologies should allow us to communicate lane closures in real time minimizing those risks.

Work Zone Data Exchanges are being implemented across the US to share the real time position of those lane closures through apps such as Waze but also posting them in the new standard protocols for CEVs to read (whether V2N, V2V, V2I, DSRC or 4G/5G). Beacons attached to maintenance trucks can locate with GPS precision which lanes are closed in real time with huge potential to reduce crashes in those areas and also protecting road crews. 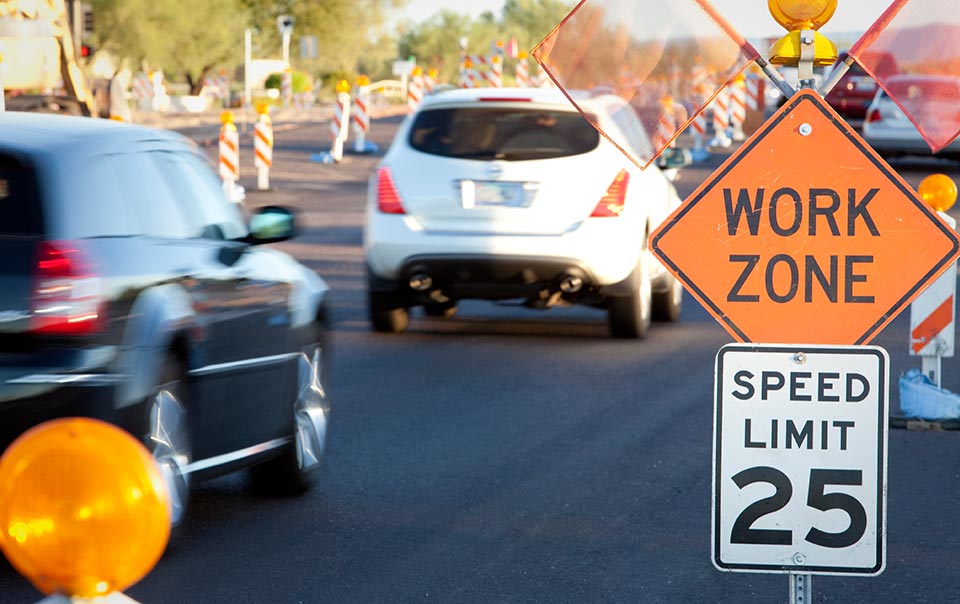 In addition to safety, from a consumer product perspective, one could expect that users of AVs may demand different configurations inside the vehicle, not necessarily concurrent with existing designs with 4, 5 or 7 forward-facing seats.

New services will likely be deployed and expectations regarding comfort will likely have to be taken into consideration when configuring driverless vehicles and the roads they drive on. For example, accelerations and decelerations, lane changes etc. may need to be softer which could entail longer highway transition areas, merge lanes and low-latency connectivity coordination between vehicles driving at high speed.

Roadside sensorization and connectivity infrastructure could assist in supporting ADAS systems to decrease the amount of intelligence that would need to be incorporated in every car to ensure both safety and comfort, hence potentially reducing the manufacturing costs of the vehicle and price-tags for consumers.

Regardless of the level of autonomy, a separate but unstoppable trend is the electrification of the fleets. This welcome change should reduce what is known as scope 3 emissions of highways (those created by the users of a product) and could make for much more sustainable infrastructure and mobility. However, it also brings the issue of where to recharge all those vehicles (and where all that energy comes from, but that’s a different debate).

In addition to the deployment of fast EV stations, an interesting opportunity arises in the deployment of in-laid inductive charging in the pavement. Different pilots have proven the concept in northern Europe and although currently cost-prohibitive for an entire network, especially if one considers the cost of repaving the road, with advances in technology these elements could be considered as part of any future retrofittings in which repaving costs had already been factored in, hence possibly becoming a feature of those sustainable infrastructures of the future.

AIVIA is the product that Cintra is developing to tackle all these issues and trends, and pioneer in what will be the highways of the future. Through partnerships with top-tier players in different fields, AIVIA acts in the physical environment and in the digital environment to bring connected, sustainable infrastructure that will improve safety for all users (conventional, connected and AVs) under all circumstances, improve traffic flow, and introduce the elements to transition to a more sustainable mobility that is more respectful with our planet.