PPE is something we have all dealt with, especially thanks to COVID. If you have ever worn gloves and a mask, that is PPE. If it protects you or someone around you, PPE. Not least among the many challenges of construction is wearing the right outfit, and it’s not because of fashion. Today we run through the 5 points of 5-point PPE (Personal Protective Equipment) on construction sites and their origins.

The worker’s hard hat is a relic of the war helmet. Depictions, descriptions, and evidence of soldiers with helmets go back to around 1000 B.C.E. and possibly before. But the idea of keeping workers’ heads safe from falling objects appears to be a comparatively recent one. Workers in shipyards in the 1800s had the idea to cover their hats in tar, then set them out in the sun to dry. Once hardened, they provided a level of protection from anything that struck their heads. 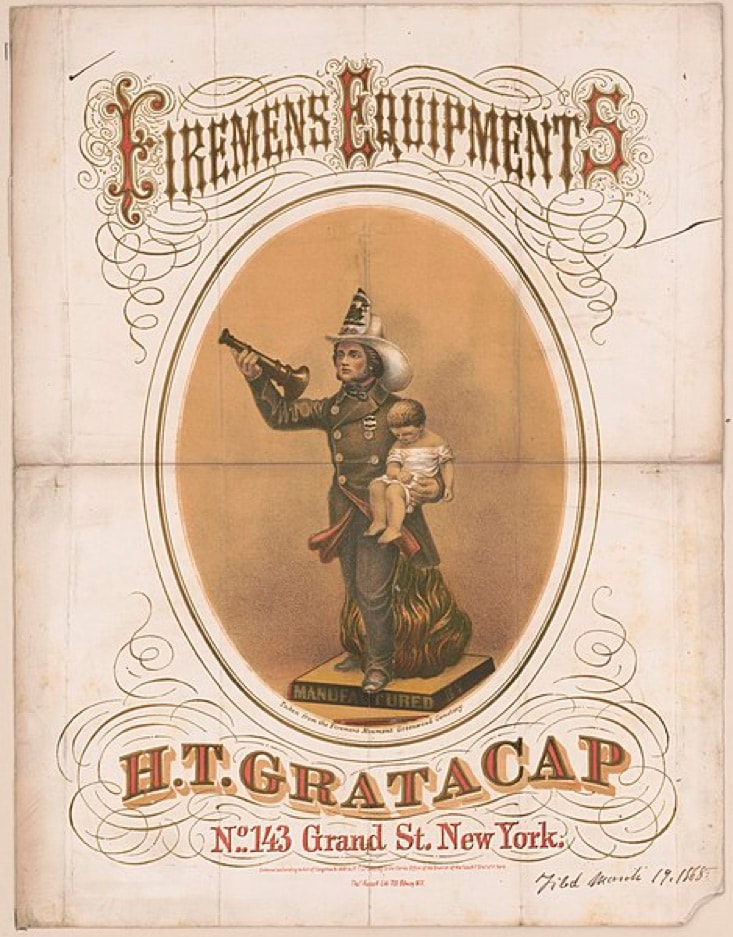 New York firefighters’ leather helmets, designed by Henry T. Gratacap and which still exist today, are made effectively on this principle. However, the hard hats of construction are attributed to Edward Dickinson Bullard, who took his son’s WWI steel helmet and decided to apply it to industrial hazards instead. Over the years, the design has been refined, with things like fiberglass, aluminum, or polyurethane, which weigh less and put less strain on the neck.

The hi-vis vest is a staple of any construction site, and it frequently is used to denote workers such as surveyors on sites where construction isn’t even happening.

I’m sure you remember being told in school that objects either emit light or reflect light. Well, fluorescent chemicals, or fluorophores, kind of do both. Their molecules absorb light of a higher (bluer) wavelength (or color, as we see it) and after about 10-8 seconds, emit it at a lower (redder) wavelength. This is why, when you wear certain colors under a blacklight, they show up brightly. Even though the room appears dark, the fabrics are absorbing the invisible high-energy UV light from the blacklight and emitting lower-energy visible blue (or yellow or pink) light. 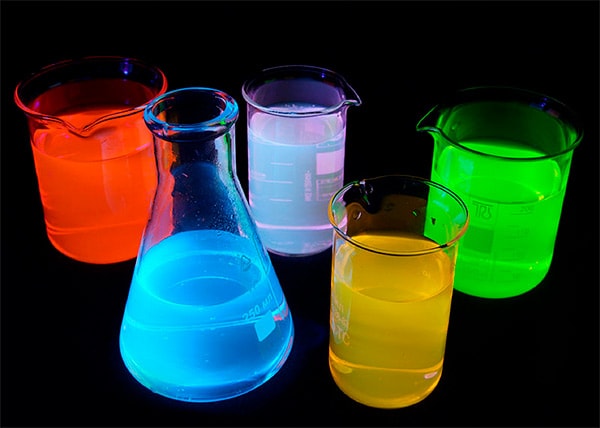 It isn’t limited to UV though. Daylight Fluorescent Dyes absorb visible light of higher-energy visible wavelengths and emit it at lower wavelengths. There is now a spectrum of dyes that allow wearers to stand out brighter than anything around them, giving the impression that they shine.

Combined with retro-reflective tape, hi-vis clothing has expanded the range of when and where we can work safely. Retroreflectors (such as cats’ eyes) reflect light back at the emitter like a mirror but scatter it imprecisely over an angle of a few degrees. Rather than simply reflect an image of an oncoming car back at itself, the tape reflects the light back in the general direction of the car, making the jacket seem brighter and apparently luminous.

If you’ve ever stubbed your toe, you’ll appreciate steel toe capped boots. Before modern Health and Safety, it was cheaper to replace injured workers than to invest in their safety. Workers who valued their health would wear leather boots or even wooden clogs in a bid to prevent themselves from being discharged from the workforce.

This practice was developed further during WWII; non-commissioned German officers began to reinforce their shoes with metal toe-caps. The first such boots to hit the US shelves were made by the Red Wing Shoe Company. Steel was the first reinforcement material, but others, like composite, plastics (e.g. polyurethane), and aluminum are also used these days. 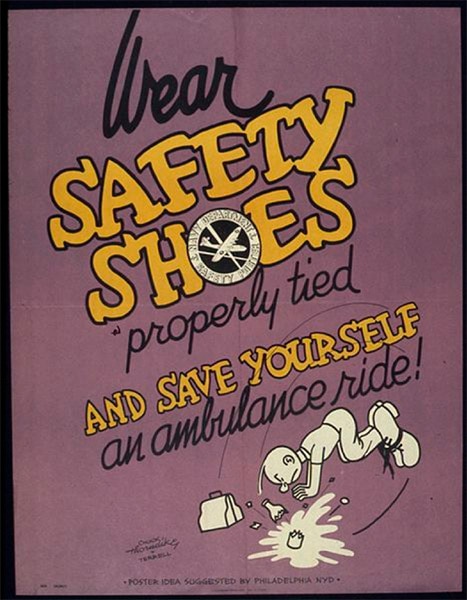 In addition to being protected at the toes, a good set of boots should also have protection from what lies beneath. Sole plates are thin sheets of metal that line the boot. Should you step on a nail they will protect your foot from getting punctured.

Homer’s Odyssey recounts the PPE of Odysseus’s father, Laertes, working in the garden: “about his shins he had bound stitched greaves of ox-hide to guard against scratches, and he wore gloves upon his hands because of the thorns.” While greaves survive only as comic-con costumes and shinguards in contact sports, gloves have come a long way.

Blacksmith gloves in medieval times were typically made of sheepskin; cheap and flexible, it gave the blacksmith a measure of necessary dexterity. Leather or fabric were options for handling the hot coals and molten metal, but fabric had a low durability and leather was considered expensive. Sheepskin was also a favorite of masons, especially when handling hazardous materials or tools, while hunters preferred (and could apparently afford) leather gloves. 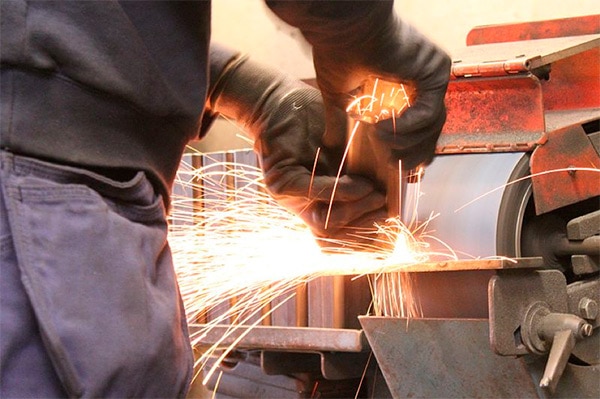 Working in construction, there are a number of choices. Nylon shell gloves are pretty standard, but you should buy the glove that fits the job: If you handle wet concrete, you need something both alkaline-resistant, waterproof, and seamless. Wet concrete can have a pH of up to 13, high enough to eat through clothes and skin if left exposed. Such gloves are usually made using a method that has its origins in a romantic story from 1889:

The original molding process for rubber gloves was developed when the chief nurse of the operating room at Johns Hopkins Hospital, Caroline Hampton, had a nasty skin reaction to mercuric chloride. Her soon-to-be husband, Dr. William Halsted, asked the Goodyear Rubber Company if they could make her some thin rubber gloves to protect her hands. Some 5 years later, Halsted would make these gloves mandatory for use in the hospital.

Goggles are a comparative latecomer on the PPE world stage. While eyeglasses had technically existed for centuries, it was African-American inventor, Powell Johnson, who patented the first “eye protector[s]” in 1880. His goal was to save the sight of furnace-men, firemen, and anyone regularly exposed to bright light. The invention used two layers of semi-opaque cloth to reduce the glare that the workers received. 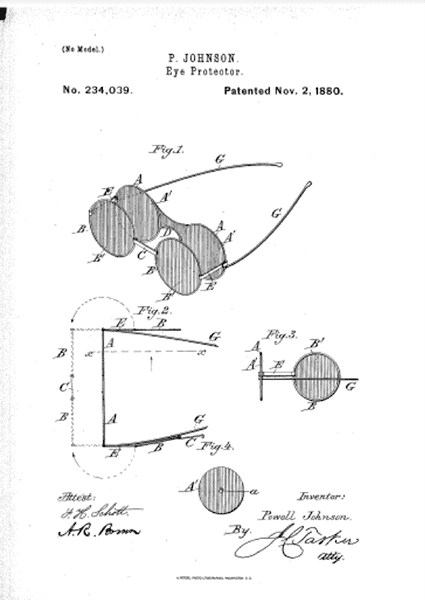 While an important development, these goggles provided little to no impact protection. That would come later, but only after an accident in a lab in 1903 in France: After knocking a bottle of cellulose nitrate off a shelf, Edouard Benedictus noticed that some of the liquid plastic had adhered to the pieces of broken glass, holding them together. When he later read about a spate of windshield-related injuries in driving accidents in Paris, Benedictus realized he could make safety glass by coating windshields with the liquid plastic. The material was now ready.

The first true safety goggles were made in 1909 by the Julius King Optical Company in collaboration with American Optical. They were called SANIGLAS, and gave rise to the eyewear that we know today. Today, safety eyewear is worn by people in manufacturing, construction, and medical industries to protect their eyes from impact, particles in the air, glare, and even harmful electromagnetic radiation.

This concludes our brief tour of PPE. If you work with it, but never had a clue where it came from, I hope this makes it a little more comfortable.