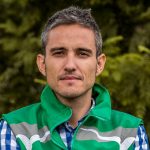 A civil engineer, graduating in 2007. From November to December 2007 he did a work placement at Ferrovial-Agromán, as part of a Masters in Leadership in Civil Engineering through the Rafael del Pino Foundation. In January 2008, he joined the branch in Castilla la Mancha as a trainee engineer, working on different infrastructure projects in Toledo and Albacete for 5 years. Colombia was/is his first international placement. He transferred there on 1st December 2012, working initially on the Ituango hydroelectric project, and then moving to the Carrera 80 motorway project in Medellín, where he was site manager from November 2013 to December 2015. In January 2016 he joined the second phase of the Bucaramanga-Barrancabermeja-Yondó 4G project, where Cintra was part of the concessionary consortium, with Ferrovial-Agromán heading the construction consortium.