Construction of urban tunnels: lessons from Crossrail for the present and the future

Underground tunnels in cities have always posed a major engineering challenge: in addition to the usual construction difficulties and uncertainties associated with underground excavation, existing infrastructure is unavoidably affected, since it is unlikely to have been designed to withstand the deformation in the foundations that tunneling causes.

The problem is even more acute when the tunnel is in a densely-populated area, such as the centre of London, where the buildings and other infrastructure (roads and Tube tunnels) are quite old. The critical phase is usually during excavation. Consequently, the primary construction company is responsible for completing the project successfully in all aspects, especially in interactions with the surroundings, without ignoring the important role played by other parties (commissioning authority, architect, site managers, etc.). The choice of tunnel construction method is always extremely important, and the construction company’s experience and skill are the primary guarantee of safety, not only for on-site workers but also for the surrounding inhabited environment.

The value of the assets at stake has led to the development of increasingly robust and reliable construction methods, such as ultra modern tunnel boring machines (TBM), which use the latest developments in robotics to dig and shore up the tunnel. In this way, the work face is sealed and protected by a shield, while precast sections of tunnel lining are installed and the excavated rock and soil is carried cleanly back to the tunnel mouth by a screw conveyor.

However, despite the huge progress made in tunnel boring, it is still critical to monitor any resulting earth movements, since the mere use of a closed shield TBM does not, in itself, ensure that the subsidence which takes place in any such operation will remain within the admissible limits for the buildings in the area.

Although numerous factors affect ground subsidence during tunnelling, a crucial factor for minimizing earth movements the pressure exerted by the terrain on the TBM shield. The machine operator has a continuous log of the pressure of the rubble being excavated in the front chamber and can increase or decrease it at will using a number of mechanisms, such as the power of the jacks used to drive the shield forward and the rotation rate of the cutter head. 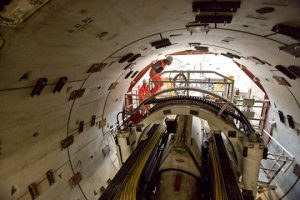 At the same time, earth movements on the surface are monitored constantly and the data is relayed in real time to the control centre. Although there is a rule of thumb that higher front pressures mean lower subsidence, the TBM must be operated at the lowest feasible pressure so as to minimise undesired side effect such as wear on the machinery and lower yields. As a result, it is necessary to design a tunnelling protocol beforehand which establishes a range of pressures at each point on the route, which the operator must follow to ensure that the impact on the surrounding remains within the limits of tolerance.

The scale of subsidence depends on many factors. Some are connected with the construction process (TBM characteristics, pace of advance, front pressure, backfill grouting, etc.) while others depend on the terrain itself and the type of buildings above ground. It would be very useful for all of these factors to be incorporated into a predictive model. To address this issue, we have created a database compiling all available experience, both in-house and published, of ground settlement in connection with a range of tunnels.

The database was used to develop empirical models that have been applied successfully on a number of tunnelling projects, such as Barcelona Metro Line 9 and the M-30 Southern bypass in Madrid. In furtherance of this R&D strategy, an ambitious three-year project has been established with Massachusetts Institute of Technology (MIT) to leverage the experience gained with the Crossrail tunnel in London to develop a tool based on three-dimensional numerical models that can predict subsidence caused by tunnel boring. Once this tool had been fine-tuned, it will provide greater precision in protocols for shield pressure with closed shield TBMs. This will provide a notable improvement not only in construction safety but also in construction efficiency and costs.