In March 2013, the media reported that an ancient burial site had been discovered during construction work being performed by the BFK consortium as part of the Crossrail project.

Over a period of two weeks, a team of archaeologists carefully uncovered thirteen skeletons buried at a depth of 2.5 metres at the construction site in Farringdon, close to a former Carthusian monastery. Given the depth and the way in which the bodies were arranged, it is estimated that they were buried in Charterhouse Square around 1349, during the Black Death. Fragments of pottery dating from the same period were found nearby. 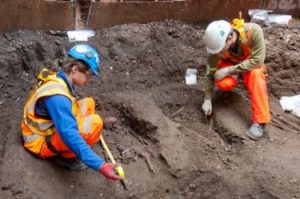 This 664 year-old cemetery was discovered when the operator of an excavator working in a grout shaft uncovered a skull, to his surprise. The skeletons have been transferred to the Museum of London Archaeology for lab testing with a view to ascertaining the cause of death. Radiocarbon dating may also be used to better establish the date of burial.

The London Charterhouse was a Carthusian monastery founded in 1371, outside the walls of the city of London. It is thought that the burial ground pre-dated the monastery and that it continued in use as the monastery developed through to the mid-16th century, when it became the outer cemetery with its own chapel.

As part of the BFK consortium, Ferrovial Agroman is proud to have worked in areas of such important historical interest for London and the UK. This discovery occurred during our work on Crossrail, for which we are building two 6.4-km tunnels between Royal Oak and the new Farringdon station. BFK is also building the caverns and accesses for four different stations.