When discussing transportation policy, the United States infrastructure community has traditionally been focused on finding alternative ways to raise funding to address the infrastructure crisis and not so much on finding ways to spend more efficiently.

It is well known that the traditional method for funding road infrastructure in the United States through charging a fix amount of taxes per-gallon cannot anymore cope with the demand for funding of road construction and maintenance. Gas taxes in the United States are not keeping pace with inflation, and vehicles are becoming more fuel-efficient leading to overall funding decreases in real dollars. At the same time, that demand is growing as the vast majority of the interstate network created by then President Eisenhower’s led Federal Aid Highway Act of 1956 is reaching the end of its service life. Finally, the growing economy and population requires new and better roads throughout the country and especially in the faster growing states of the sunbelt.

US Secretary of Transportation Anthony Foxx is the first high ranking public official I can think of who has been adamantly insisting in focusing also on the flip side of the infrastructure coin: efficient spending. He did so when he addressed the Texas Transportation Forum this January in San Antonio, and again last February 20th when he addressed the US Chamber of Commerce Transportation Summit. There he discussed the “necessity of investing wisely even if it means re-thinking how you do business” and implored, “Do not let the funding question alone dominate the transportation issues.”

The Texas Department of Transportation and the North Central Texas Council of Governments have been trying to implement these efficient spending policies in the past years. The three PPP Managed Lanes projects procured and developed in the Dallas Fort Worth Metroplex since 2008 (that Cintra/Ferrovial are leading) were able to reduce initial spending by 27% through the implementation of Alternative Technical Concepts and efficiencies identified through the industry review and development process:

Some of these efficiencies were based in a more useful combination of design, construction and maintenance solutions. Others were the result of connectivity and operational improvements that will increase future usage and thus relieve even more congestion than originally anticipated. There are also cases where elements of the initial configuration were determined to be delayed because they were not required to fulfill initial service needs, allowing for enhanced and faster project delivery timelines of congestion relief to be realized by the public.

It has recently been announced that the first of these three projects to enter into operation, the North Tarrant Express Segments 1&2, will do so at least six months ahead of schedule.

PPPs are ultimately justified because they are more efficient and not simply because they provide access to alternative funding sources. They are at times seen as a necessary evil because only the second benefit is recognized. That greater efficiency actually derives from the integration of activities as shown in the above case; from developing the projects with a lifespan perspective; from the transfer of public risks that can be better handled by the private sector; and particularly from the private enterprise incentive which aligns interests and sets objectives in a better way under a public-private partnership. Conditioning private returns to the functional success of a project (effectively serving the public and relieving traffic congestion) elevates PPPs from the efficiency point of view to a different division altogether.

Unfortunately research on this specific topic is difficult to perform and limited to this point. The Allen Consulting analysis developed in 2007 with the University of Melbourne confirmed the superior efficiencies of the PPP delivery method: Using a sample of fifty four PPPs and traditional DBB projects, they found significant cost advantages for the PPP model (average net cost over-run for PPP’s 1% vs. 15% for traditional procurement), and equally as important, better timely completion with the PPP model (3.4% ahead of time on average vs. 23% percent behind time for traditional project delivery).

As referred above, the potential of the PPP tool in the United States can be seen in the case of the three Managed Lanes projects under development in the Dallas- Fort Worth area. Through the worst years of the financial crisis, these three projects were able to raise in 2009, 2010 and 2013 some $4.84 billion, that together with $1.12 billion of tax-payer dollars, will bring over time almost $10 billion in public infrastructure enhancements in the region: 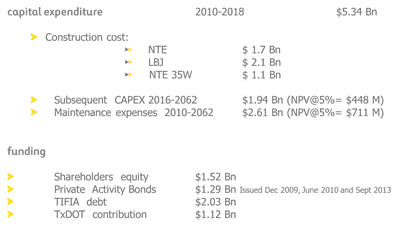 These three projects together are creating more than 4,000 jobs and employing some 400 local companies. According to FHWA multipliers they will generate more than 120,000 direct and indirect jobs. This is being done with limited public funding and in a truly efficient way; making decades- long discussed projects and traffic congestion relief a reality for hundreds of thousands of motorists – today.

This article was originally published in P3 Bulletin‘s Spring 2014 edition.

When someone writes an piece of writing he/she maintains the image of a user
iin his/her mind tha howw a user can be aware of it.
So that’s why this paragraph is amazing. Thanks!

Look at my page: Information About England On Wiki

When someone writes an piece of writing he/she maintains the image of a user
iin his/her mind tha howw a user can be aware of it.
So that’s why this paragraph is amazing. Thanks!

Look at my page: Information About England On Wiki