Improving cycle safety in our cities

With record numbers of people taking to two wheels in the UK, we are working with our customers to make our roads more inviting places to be.

As cycling increases in the UK, Britain’s cities are playing catch up with their European counter parts.  With the Department for Transport revealing a £240m investment in cycling infrastructure and training, and local councils being urged to make cycling safer – Amey is rising to the challenge to support our customers in making high-quality cycling infrastructure a reality.

What we can learn

If you ask anyone to name a city known for cycling, you will more often than not get the answer: Amsterdam.  This is because many see Amsterdam as the shining example of a city that has embraced cycling.

Over the years, Amsterdam has made significant investment to ensure the correct infrastructure is put in place that helps to increase the take-up, as well as the safety, of cycling.

One of the main reasons often cited as a barrier for not cycling is safety. In Amsterdam, better and separated cycle lanes and traffic signals help to make users feel safer, thus encouraging bikes as a preferred method of transport.

Improving cycle infrastructure in the UK

It’s now necessary to provide more than just painted cycle lanes and a great example of where Amey is helping to improve cycling infrastructure is Liverpool.

Cycling in Liverpool has growing in popularity and we’ve been working with one of our customers, Liverpool City Council, to ensure that when major scheme work is planned, cyclists are treated as importantly as other road users.

Amey recently helped the Council to design and construct a £3.5m scheme in the city centre, to improve cycling safety and encourage more people to use this greener, more sustainable method of transport.

Innovative new traffic lights, specifically designed for cyclists, were installed as part of the scheme at two of the city’s busiest junctions. The lights are designed to keep cyclists safe as traffic starts moving again, by giving cyclists five seconds head start over other vehicles. 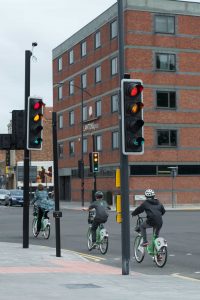 Using video and thermal imaging detectors, the traffic lights distinguish between cyclists and other vehicles – ensuring the advance cycle lights are only used when cyclists are present, avoiding delays to other road users.

These are the first traffic lights in Liverpool to use this innovative system, with very few other cities using similar systems outside London; we had to seek special permission from the Department of Transport to install this technology.

Amey has also played a major part in planning Liverpool’s award-winning City Bike scheme, which is the biggest bicycle hire scheme outside London.  City Bike has been a huge hit and in just over a year the bikes have been hired over 55,000 times, with users clocking up more than 300,000 miles. 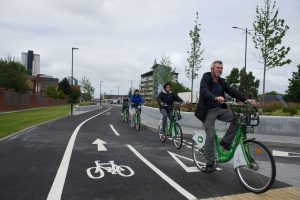 We are also supporting Liverpool City Council’s road safety campaign to reduce the default speed limit on residential streets to 20mph. This change will create an environment that is safer for cyclists and all other road users.

As a company our fleet team are taking a proactive approach to fit all of our HGVs with appropriate safety features such as proximity sensors that help prevent cyclists being caught in  “blind spots” – alerting the driver when the cyclist comes into close contact.

So when it comes to helping our cities to catch up with our European counterparts, I’m personally proud to see Amey fast becoming a key player when it comes to cycle safe infrastructure andinitiatives.