The use of drones in construction: a different way of working

The word drone no longer causes surprise, and is fortunately becoming increasingly detached from its image as a military device. The use of drones for civilian purposes is fast becoming a reality of life. Two years have gone by since Ferrovial Agroman bought its first aircraft (yes, you read that correctly, aircraft, because that is what drones are), and in those two years we have built up plenty of experience in the field of drones in construction. The wish to learn and the search for alternative solutions in an innovative market with a large potential for growth leads us to continually discover new applications and new tools with which to complement our drones and achieve ever more surprising results. 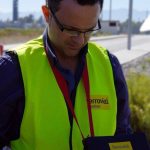 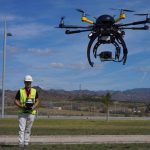 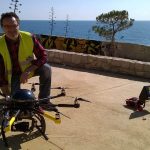 Today, we can truly say that this technology has been implemented in many areas within our Group companies, although a few corners still remain where a lack of knowledge, or perhaps a certain fear of uptake, make us unwilling to go outside the comfort zone afforded by relying on procedures backed by experience.

It is also true to say that current legislation is not conducive to optimal development of new and recent applications, evidence of the different speeds at which new technologies and the laws required to regulate them are being developed. But the fault cannot be placed solely at the feet of our legislators, for if they do perhaps attempt to introduce too many limitations on the use of drones, they do so because safety is a priority above all else. And perhaps this is rightly so, in the light of incidents published in the media, more frequently than we would wish, involving commercial flights and drones.

And so when working with drones, at Ferrovial Agroman we have safety uppermost in mind, and are scrupulous about complying with the legislation in force in each particular country, as we are about identifying companies which, though providing acceptable results, may apply dubious interpretations of the law.

This is not the only limitation to be taken into account when using such technology. The inclusion of an increasing number of new sensors means that information not previously available can now be obtained. Process automation also improves quality, and allows us to analyse and take decisions which can serve to make the best possible use of current methodologies, while greatly reducing costs. This involves handling large volumes of data, which in turn requires powerful equipment, specialised staff, and software capable of processing such information.

Reflecting on the concepts contained in the above paragraph, there are some with which we are probably already familiar:

These concepts are all used in the majority of definitions of Big Data, giving us a common perspective of both.

Three years have gone by since I was given the green light by Ferrovial to pursue this idea, which some initially saw as rather far-fetched. And almost two years since some of my excellent colleagues and I managed to fulfil all the requirements for obtaining a license for piloting drones. A year ago, Ferrovial Agroman was registered as an operator at AESA, the Spanish Aviation Safety and Security Agency. And during all this time there has not been a single moment when I have not relished breaking the established norm and looking for a different way of doing things, something I could possibly summarise with two entirely new concepts: INITIACTIVE and INNOVACTION.