The Solar Impulse is a Swiss project to develop a zero-fuel aircraft using only photovoltaic solar power. The aircraft circumnavigated the globe between April 2014 and 26 July 2016, during which it made a stopover in Seville in July this year. Today our colleague Abel López, Head of the Control Tower of the Seville Airport for FerroNATS since 2012, talks about the experience of directing the iconic aircraft from the control tower. He also explains the day-to-day work of an air traffic controller.

Our daily routine is organised into shifts divided into periods of operational activity and rest periods. Control may be exercised by a single position (a single controller is responsible for all air operations) or by dual positions (two controllers share responsibility for the operations) depending on the workload at the time and the configuration of the control tower. Airports with very high workloads may have up to three active positions.

Coordination, both between the tower controllers themselves and between the tower and the approach controllers, is a crucial aspect of our job. Proper coordination in time and form ensures efficient, safe air traffic management. The profession is highly regulated and of course we work in accordance with the currently applicable national and international norms and standards.

Staff training is an essential part of our day-to-day activity. This training is carried out in the work centres, the control towers and in the training centres.

The controllers’ workday, in addition to radio communications to manage the arrival and departure of aeroplanes, is partly devoted to the training, operational safety and management areas. Each controller is assigned a role in one of these areas.

An air traffic controller must have multi-area skills, decision-making capacity and an excellent perception of three-dimensional space. 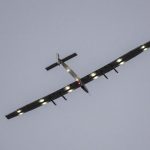 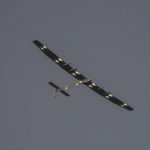 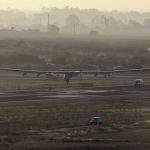 Without doubt the time invested in performing the landing operation.

The landing of a conventional aircraft is based on published procedures. It takes more or less time to complete the procedure depending on the characteristics of the aircraft, but always within an acceptable timeframe. Due to its structural configuration, on the other hand, the Solar Impulse is totally dependent on weather conditions so that the landing operation could not be fitted in with the rest of the operations of the airport. Therefore we were forced to reserve special time slots for this landing and the subsequent take-off of approximately 35 minutes for the former and 45 minutes for the latter.

In addition to the fact that it can operate without fossil fuels, its dimensions caught my attention, especially the 72-metre wingspan. In this respect it is bigger than many large conventional aircraft such as the B-747.

To save space and weight it is not fitted with undercarriages on the wings and therefore it lacks autonomy after landing. This means that it requires ground personnel, both on foot and on bicycles, to help the aircraft with taxiing once it has touched down.

Like the landing, the take-off required several meetings to agree on the procedure to be followed by the airport and route controllers and by the pilot in command of the aircraft. After selecting the appropriate date based on weather conditions both at Seville Airport and on the route to the destination, a time window was selected in which the impact on the airport’s normal operations would be zero or as small as possible. It must be kept in mind that the take-off entailed locking of the airstrip by the aircraft and the auxiliary personnel for a period of around 30 minutes.

In addition, during the month between arrival and departure the Solar Project team organised guided visits to present the project for all who wanted to learn more about the initiative.

While it is true that Seville Airport manages a wide variety operations – for example, test flights by prototypes for military transport aircraft since FerroNATS is the air navigation services provider in Seville for the aeronautic giant Airbus – it must be said that the flight of the Solar Impulse is unique among the operations managed by this airport to date.

The highest number of air operations at Seville Airport is produced in the second quarter of the year, especially in spring. These peaks involve an increase in the number of passengers managed by the airport authorities with all that this entails.

From the point of view of air traffic control this increase in operations translates into more radio communication time and therefore a greater workload for the controller.

Yes indeed, it depends a lot on the type of airport and FerroNATS manages control towers in some unique airports. Ibiza, for example, is the prototype of the seasonal airport. The number of flights managed by the Ibiza control tower is less than 100 per day in winter, but that number is multiplied by five in summer when more than 500 flights take place every day.

In Seville the highest number of daily movements is around 250 compared to more or less 100 during the low season.

The air controller’s functions in the workplace are fully defined by the protocols and clearly identified. This fact aids the decision-making process and therefore helps to avoid situations that could cause high stress levels in the controller.

The rest periods provided for the controller after the active operational spells and the work and rest cycles are designed to mitigate any stress that could build up.

I think the profession of air traffic controller must be understood as a service that we provide to the operators and, ultimately, to the passenger. In my opinion the best part of this position is the satisfaction of doing an efficient job that has a direct impact on the welfare of air transport users.