It's written all over your face..

All of us humans have one thing in common: we have feelings. We experience a special emotion when somebody gives us a present, when a loved one dies, or when watching a horror movie. These feelings are the result of sensory experiences and are different in each of us.

But the feeling appears because we perceive emotions for biological reasons, namely the liberation of certain hormones and neurone connections which are capable of quickly interpreting what our senses are capturing. Our brain is what transforms these feelings into emotions. Emotions appear instinctively and last but a moment.

They are more intense than feelings and lead a person to act subconsciously.

American psychologist Paul Ekman has been studying emotions and facial expressions since the 1960s. His observations in Papua New Guinea showed that non-verbal behaviour within an isolated tribe was not driven by cultural factors. As Darwin said, facial expressions of emotion are common throughout the human race. Whatever the culture or ethnic origin, it is a wholly biological, rather than social, issue. Thus, evolution of the species is what has configured muscular movements in the face to convey emotion.

Ekman concluded that there are 6 universal emotions:

Any person, anywhere in the world, can recognise these simply by looking at a photograph. Ekman later extended this list to include other positive and negative emotions. However, he was unable to prove whether they were all coded in the facial muscles. As with the theory of evolution of the species, today this is considered a proven scientific fact.

How can emotions be measured accurately?

Since we know that each of our facial movements unequivocally expresses an emotion, we can go on to measure such movements. If we record facial expressions with a camera, we can measure the micro expressions which make up an emotion.

Today’s technology allows us to transfer this information to software which is able to interpret such movements. Facial recognition algorithms will then interpret the intensity of emotion in real time. The information this provides us with is extremely useful. Essentially, emotions are subconscious and instantaneous. They can be measured with an accuracy of almost 100%.

It is therefore practically impossible for us to hide our emotions. If we try to say something which contradicts that which our face shows, such inconsistency would be picked up. And it would also be possible to record the emotion being shown by the person in real time, and the exact level of intensity of that emotion. Isn’t that amazing?

What practical applications does facial recognition of emotions have?

There are many techniques for predicting human behaviour. The common denominator in all of them is that they are based on an understanding of the brain processes that lead to us taking a decision. All of such techniques are based on neuroscience. Most of them are intrusive, requiring instruments to be applied on the person.

This means that reactions are conditioned, as the person has to be in a strange environment, such as a laboratory. Facial recognition of emotions requires no gadgets or wearables. Nor does it necessarily require a person to be subjected to an unfamiliar environment. It is possible to observe people in real time and in their normal environment.

Its versatility and high degree of infallibility means that this technique can be used in a number of areas:

Cutting edge technology for a sector that grows inexorably

Innovative technology requires constant development. New patents are constantly surfacing to improve existing tools. Highly technical industries add to this and become essential allies. Some examples of this are:

Companies throughout the world recognise the many advantages to be gained from a sector which is growing steadily, at a yearly rate of 30%, with estimations that it will soon be worth over 2 billion dollars.

Large companies are making capital movements with a view to implementing this technology. Apple bought Faceshift, and only a few months later took control of Emotient, where Paul Ekman is a member of the board. Facebook and Google also made moves in this respect, looking to enable users to tag their personal photos.

What is b2in emotional tasting experience? 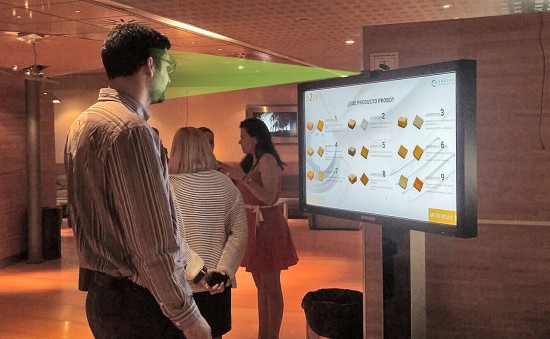 Today, companies cannot simply wait passively to see how their clients react to their products. Providing a good service is more than simply offering something new and of high quality. It is necessary to stand with clients, know their likes, personalise their experience with our products or services. Ultimately, the client has to be at the centre of our efforts, and the client has to see that this is so. Ferrovial Services hasn’t lagged behind. Conscious of the enormous benefits of this technique, the company has promoted a pioneering project in Spain.

b2in is the brand used by Ferrovial Services on the high-speed, long distance and hotel trains it manages for RENFE, where it is responsible for catering services.  With passenger satisfaction in mind, b2in has launched several innovative initiatives, such as creating a mobile bar, and developing a website  (www.b2in.es) where you can already pre-order the special children’s Fun Pack, and where you will soon be able to pre-order any other product from the bar.

As on previous occasions, b2in used the services of the Torres brothers – renowned chefs – for developing its autumn menu on the AVE (high speed) trains, and invited a large number of passengers to a tasting session at its VIP lounge at Atocha station, in order to try the snacks which will be on the onboard menu over the next season. The aim was clear: to gauge passenger opinion without actually having to ask any questions verbally. What we wanted to find out was the ideal combination of items for each of the five services (breakfast, snack, lunch, tea and dinner).

In the video the chefs and brothers Sergio and Javier, who have 2 Michelin stars, speak about this technology. Each person had the chance to try several sandwiches, both hot and cold. Through a series of screens fitted with a webcam and distributed throughout the lounge, users could obtain information on the menus tasted. Next to a picture of the menu there were questions such as “Does that look appetising to you?” The person in front of the screen did not even have to interact with it.

The camera captured facial emotions to learn what emotion the picture of the food tasted earlier had produced. In our constant strive for excellence, this experience has been extremely positive. A double objective has been achieved: to obtain the client’s true opinion, and to do so using modern, inexpensive and very reliable technology.