What plants can teach us about earthquake prevention

Pressure under the surface of the earth increases gradually until it finds a way out. Whether it is energy from two tectonic plates, from a volcano, an earthquake or a fault line, the result is always the same: the ground shakes and cities descend into chaos.

That’s what we call an earthquake or seismic event. Observing nature, we have seen that many types of plants resist earthquakes better than our own constructions do. Why is this? How can we learn from nature? What plants can teach us about earthquake prevention?

What is an earthquake?

Earthquakes are easier to understand than would at first appear. A visual simile would be throwing a ball into a pool when the water is still. On impacting the water surface, the ball simulates release of energy by an earthquake. Or the collision of a meteorite, for example.

Waves quickly appear on the water surface and travel the length and breadth of the pool. Even in large pools, these waves will reach the edges and return.

An earthquake works in the same way, making the ground shake up and down (or backwards and forwards). To take another visual example, it is easy to understand that the more rigid the material, the easier it will be for the vibrations to be transmitted.

If, for example, we hold one end of a metal rod and someone hits the other end, we will feel the vibrations on our hand. Things change if we put our hand on the ground, or on mud, which absorbs the energy well before we get to feel the vibration.

This phenomenon especially affects rigid constructions where the different components are connected to each other via joints with limited mobility. Which applies to almost all constructions made by man.

How do plants withstand earthquakes?

When an earthquake occurs, unless there is a landslide which washes away everything in its path, the structures that tend to fall are those built by man: artificial structures. However, most plants remain untouched even in earthquakes of large magnitude. Why is this?

For a more detailed explanation we would have to go back some 1,500 million years in time. But suffice it to say here that plants have a few biological tricks up their sleeve. Unlike animals, who can (and do) flee from earthquakes, plants have to stay where they are. 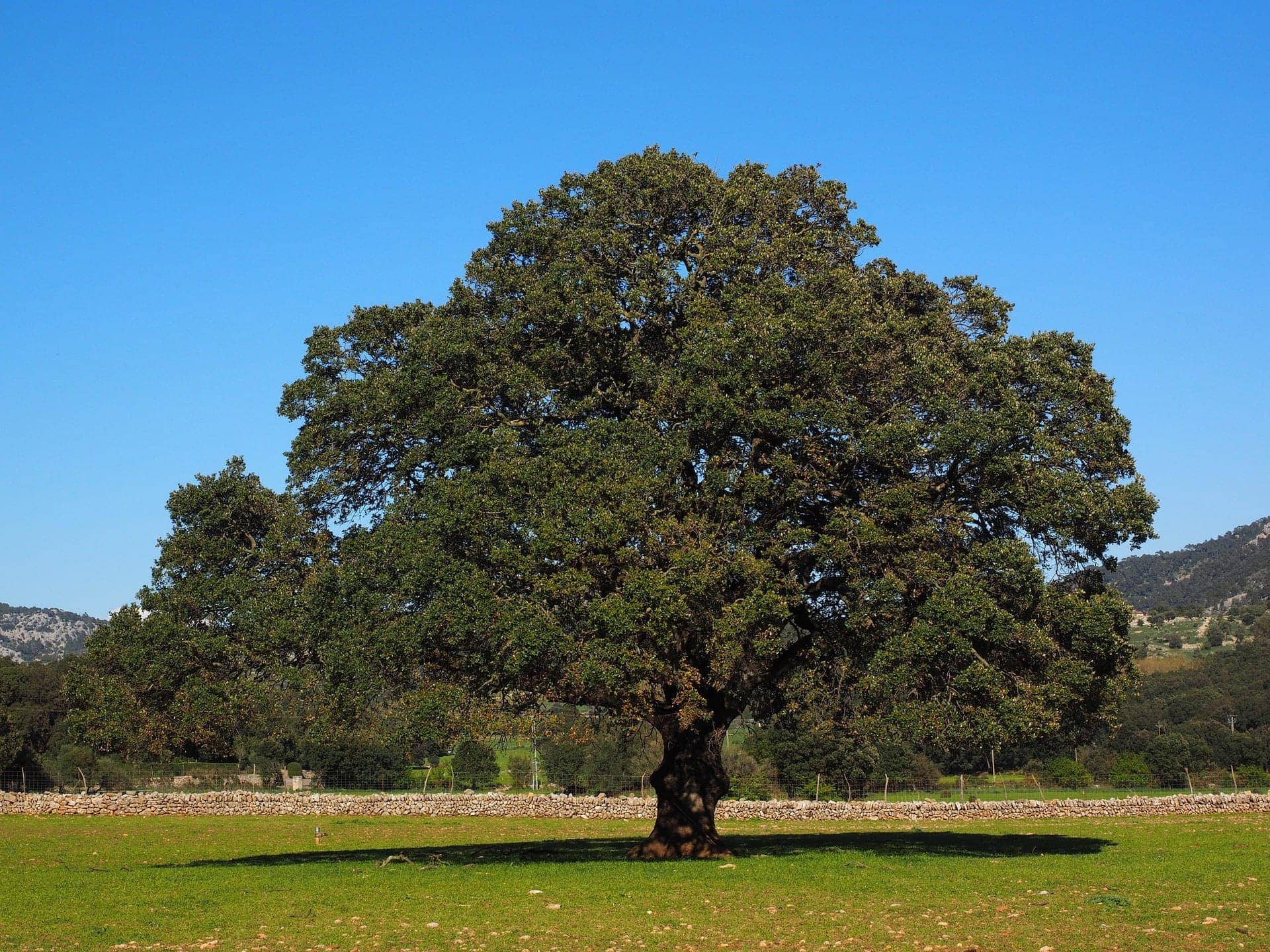 This tree cannot flee from an earthquake: its structure has to withstand it. Source: Hans Braxmeier.

[inlinetweet prefix=”” tweeter=”” suffix=””]Wherever a seed falls and germinates, that’s the spot where plants will have to face up to all the problems thrown at them while they are alive.[/inlinetweet] By problems I mean external forces. An animal trampling it, an earthquake, heavy snowfall… a plant must respond by:

Plants achieve this thanks to their highly resilient cell blocks. Of special importance is the way in which they are joined together by their cell walls. Compared to animal cells (which have greater plasticity) plants have a more rigid cell wall which allows a certain flexibility. 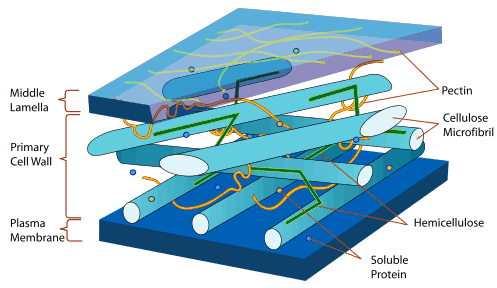 When strong forces (wind, an earthquake, an animal) impact against a plant, the plant is capable of absorbing a large part of the energy because of the way plant cells slide over one another. Deformation or bending of the cell wall, amongst other factors, works as it should.

How can we apply plant behaviour to earthquake prevention?

It has been known for many years now that [inlinetweet prefix=”” tweeter=”” suffix=””]Japanese wooden buildings are more resistant to earthquakes than those built using other materials[/inlinetweet]. Japan is a very seismically active region, and they observed centuries ago that wooden structures were capable of withstanding earthquakes.

Wood, even when dead, is capable of dissipating a large part of the energy released by an earthquake through deformation. But despite the fact that wood, bamboo and even reeds are used extensively in construction throughout the world, it doesn’t seem feasible that such constructions will be able to support many storeys or extensive deflection. How does this apply to a skyscraper or a bridge?

If we look at the diagram showing cells piled one on top of another, we can see that none of them is perpendicular to any of the others. They all point in the same direction. This would not be the case in a T- or E-shaped building, where several of its elements or wings would be perpendicular to another part of the structure.

Figure b shows movement in relation to both wings of the building. In the presence of horizontal vibrations, a tall structure with a vertical axis would suffer greater deformation.

When vibration of a T-shaped building (fig. a) causes each of its wings to move, it does so differently (fig. b). The difference in movement between the vertical portion of the T and its upper horizontal line create fractures at the point where they are joined together (fig. b).

Surfaces which react in different ways should have no points in common (fig. c).

Allow a certain degree of deformation

Each of the “blocks” comprising a plant can withstand substantial deformation. And accumulated deformation means that we can bend a stem completely and then watch it recover its original shape. But bending bricks are perhaps not the best solution in construction. 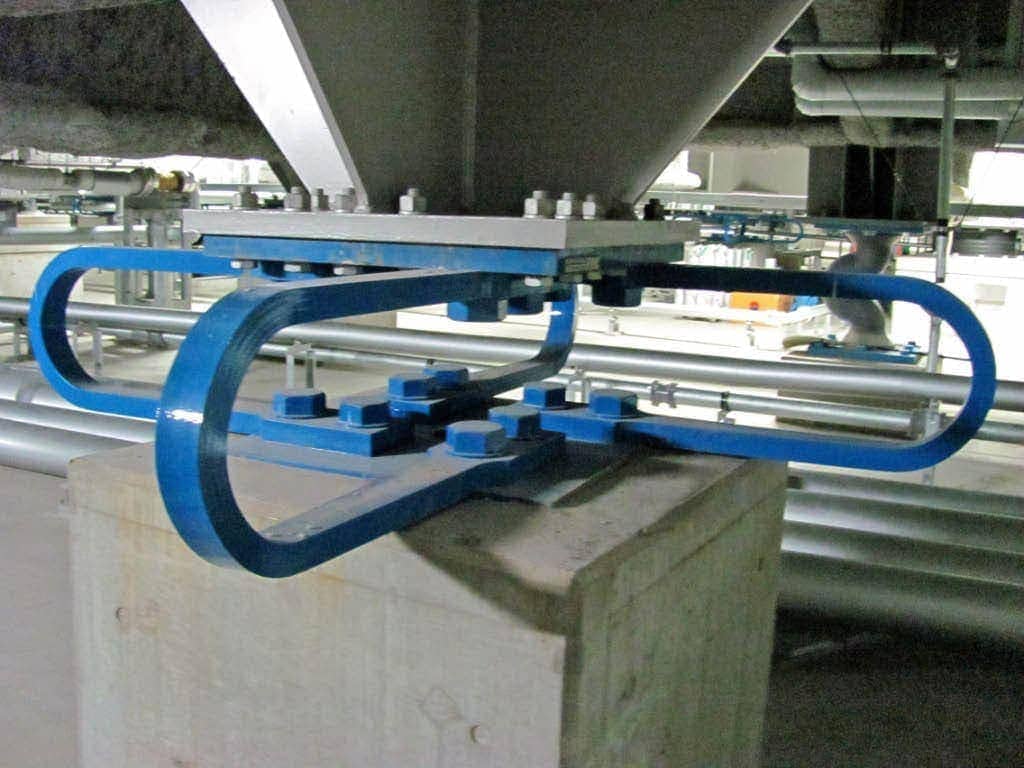 Shock absorber at the base of the Advanced Institute for Computational Science (AICS) building in Kobe (Japan). Source: JapanTimes.

From a construction point of view, incorporating some parts which have the ability to deform or bend is important. Such structures allow for movement at specific points of the foundations of a building, and this means that vibrations will not attain a significant height.

By observing how a tree moves during an earthquake or under windy conditions, we can see that the greater the height, the greater the horizontal displacement. In other words, it is essential to dissipate energy at each level to avoid a large amplitude of movement at the top of a building.

There are certain constructive elements, almost all of them based on springs or fluids, which help to dissipate mechanical energy somewhat, as shown in the following video:

The idea behind this video is to reduce deformation at upper storeys to a minimum by stopping vibrations as they travel up the structure. Large pistons filled with viscoelastic fluid are used for this. The greater the compression or tension force on the piston, the more energy it will absorb.

Plants literally use this system, since they actually contain fluid. This fluid absorbs small amounts of energy in each cell, the sum of these amounts adding up considerably.

As I have said before, one of the countries most affected by earthquakes is Japan, from where we get images like those shown in the video. If you watch closely, you can see how the whole skyscraper moves from side to side without a single window breaking.

Japan is a country that has been able to apply learning from plants to its buildings, possibly because of its Shinto origins, with an orientation to nature. Nature provides many technological solutions we can learn from: take, for example, the way it builds tiny solar panels (leaves) or cleans up air pollution (photosynthesis).