The difficulties for adapting to new technologies in medieval cit...

It’s no secret that many Spanish cities are of a certain age. In fact, many of us are proud to have such a heritage. At times, however, history and the conservation of our historical heritage is at odds with the introduction of new technologies.

Historical cities pose great complexity for the transition to the latest technologies. This is due in part to the necessary reforms required for this transition to have no significant visual impact, or to the cost of such impact if hiding new technologies from view turns out to be impossible.

History has proven that when people are intent on defending themselves from invading armies and build with this in mind, they don’t really think about whether their descendants over the centuries will have mobile telephone cover or not…This article will therefore focus on Spanish medieval cities such as Toledo, Ávila, Cáceres or Úbeda and the way in which they have adapted to new technologies, and to ICT in particular – or technologies which depend on ICT.

Although concepts such as smart cities and urban services are relatively new, the fact is that before ICT came along, certain urban improvements had already been implemented for providing better services to residents. Think of Toledo in the middle of the previous century, for example, where streets had to be adapted to car traffic and to the significant increase in the suburban population. Not only did asphalt make an appearance around the periphery of the city in place of the traditional cobblestones, but also in the centre of the city the street paving changed to make it more convenient for local residents.

Two other technologies that won’t be dealt with here but which also greatly changed such cities, or were difficult to put in place, were electricity and gas connection.

When telephone cables snaked over roofs

The advent of the telephone marked a turning point in communications. From having to look people up at home or at work, suddenly anyone could get in touch with a long-distance call. In the beginning, there was a telephone in local council offices and public buildings; later on, telephones were installed in bars and shops; and in a third and final stage, directly into every home.

This technology was relatively simple, based on two terminals connected through copper wiring, but it was precisely the copper cables that caused problems.

Think of city centres like those of Cuenca or Almansa, with cobbled streets and old buildings in a historically important and significant urban enclave. With the machinery available at the time, it was no easy task to drill in a precise manner in order to put copper cabling through. Moreover, the cabling had to be accessible because it frequently malfunctioned.

So the decision was taken on a national level – without much consensus – to lay the cabling along building walls. This was obviously not an aesthetically pleasing solution, but it was cost-effective and easy to maintain. And if a new telephone line had to be added, it only needed an additional cable added to the bunch of cables that were already there.

Cables jumped from building to building through easily accessible control boxes, many of which are still there today, and will no doubt continue to be there for some time. We have got used to seeing cables and wires all over our buildings, and nobody seems to cast them a second glance any more, despite initial opposition.

Hiding optic fibre under the cobblestones

When copper cabling started appearing all over our cities, communications had priority over all other factors, such as the visual impact of this technology on our historical heritage. Especially bearing in mind that hiding the cables required digging and heavy machinery.

When technology made it possible to hide the cabling, councils started to demand that this be done. Today, it seems unthinkable that a company installing FTTH will use pneumatic drills to dig up the street, put in the cables, and subsequently repair the street surface again.

Instead of this, specialist machinery is used to create micro channels only 2 to 3cm deep in which to lay the cables.

In cities and towns with old cobblestone streets, these micro channels are made as close to the buildings as possible, or at the point where the cobblestones meet the pavement slabs, so that the works will have as little impact as possible. 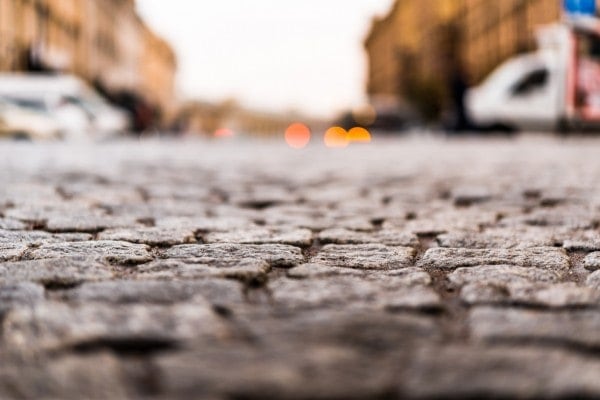 When we talk of hiding new technologies from view in an old city, two crucial factors must be taken into account. The first of these is that such towns and cities depend to a large extent on quality tourism, which expects to find an untouched location, much as it was centuries ago. While at the same time – and this is the second factor – demanding cutting-edge technology services while staying there.

This technology will at the same time provide services to local residents, but they also do not want to contemplate impaired views day in, day out.

The advent of mobile telephones signalled the emergence of telecommunications masts all over the country. The first technology to be implemented at scale was GSM, which operated at a frequency of 90 MHz and had a reach of many kilometres. This meant that masts could be installed on towers on the outskirts of villages, or on tall buildings, such as grain silos, which were also available in the fields surrounding towns and cities. They were therefore far from the historical heritage part of town, and their visual impact was low.

The problems started with DCS technology at 1800 MHz, a variant of GSM. Although this new technology meant that data could be transmitted at much higher speeds, it also meant that the masts had to be located much closer to our mobile phones. And so telephone masts moved into the outskirts of towns, and right into the middle of larger cities.

For obvious reasons, this was not a very popular development, as some people objected to having large masts crowning their historical buildings. Not enough time has as yet gone by for communications masts to be considered an object of cultural interest – as has happened with church bells, for example. So masts must be hidden from view.

The telecommunications sector thus had to learn the art of urban camouflage – with some techniques being more sophisticated than others – to hide these masts. And so there were masts in the form of chimneys, masts that imitated plants, or masts which were painted to blend in with the walls behind them.

In places where impact was particularly sensitive, such as in religious buildings, hiding the masts became a question of imagination. To give an example, some of the crosses in modern churches camouflage a communications mast in the stipes or vertical part of the cross.

The problem was particularly difficult in cities with old historical centres, due to the fact that narrow streets hamper transmission of waves. Which means a larger number of masts are therefore required. It also didn’t help that technologies such as UMTS (at 2,100 MHz) or LTE (at 2,600 MHz) were in line with DCS: increased speeds, but at the cost of locating the masts closer to the user.

A similar problem arose with the boom in pay-to-view TV channels. Satellite dishes and Yagi antennae (see above) sprung up on roofs, balconies and windows everywhere, making it necessary to enact laws requiring the installation of community antennae in order to reduce their number and visual impact. Something which hasn’t been possible with electricity cabling in many places.

The future looks complicated when it comes to modernising historical cities following the trend in emerging technologies.

Take, for example, electricity generation, which tends to bring together generation and consumption by installing wind generators and solar panels on the buildings. Do solar panels spoil the views of a city such as Ávila? Does a green Úbeda lose out on its historical heritage because its rooftops are covered in wind generators, or does it gain points for precisely that reason? How many solar panels can a church belfry carry before its image is considered damaged?

When today we see an oil lamp hanging on the stone wall of an old building, we consider it part of the town’s heritage. But we don’t think the same if we see a LED lamp with its own solar panel on top on the same wall. In fact, we tend to think that this new lamp spoils the building, because it is not in keeping with it.

Another example are electric vehicle charging stations. Not only for cars, but also for bicycles, segways or electric hover boards: the future of urban mobility cannot be envisaged without electricity. But this comes at an urban cost in terms of space, as did public telephone booths in past decades, and adaptation. The installation of a public bicycle charging station requires a connection to the electricity grid. And this in turn implies a certain level of construction work, and a visual impact.

A third example are markers which may be used in the future to keep citizens informed at all times of all manner of situations. For the visually impaired, for instance, different markers may create a sound route throughout the city to avoid falls or people being run over. This will require thousands of transmitters located all around the town. QR codes for tourists are a further example of markers which imply the placing of a piece of plastic on a historical sculpture or building.

The degree to which modernisation of a city depends on aesthetics, its historical heritage and its citizens, and how such modernisation must be done in order to adapt to the latest technologies available, are questions which are more difficult to answer in the context of historical cities than in relatively new ones.

As has happened over the years, the existing balance will be broken minutes before a new technology is implemented, adding a new added layer to the city. After a time, this new transgression will be forgotten, and another will take its place.