Biomimetic design: if nature has already invented it, copy it!

When a few years ago artificial intelligence was taxed with designing a drone structure based on a series of technical specifications, the final result was surprisingly similar to the pelvis of a flying squirrel. Why? What do human drones and rodents have in common?

Well, the flying squirrel took its time to evolve to its current form. The whole animal, including its bones, is a streamlined structure such that with four points of support – just like the rotors on a drone – it can carry the maximum weight with least energy use.

Something similar is the case today with buildings and other natural structures, such as termite mounds, trees or lotus leaves. Biomimetics works from the idea that a particular engineering problem we are facing has already been solved by nature, and tries to recreate the solution artificially. Why not copy it if nature has already invented it?

We will start by looking at certain biomimetic materials and their technical applications, followed by certain shapes we have copied from nature, and then go on to deal with temperature regulation in buildings.

Some time ago there was much talk about a magic spray which, when applied to a surface, prevented water seeping through. If water was splashed onto the treated surface, or even if the article in question was placed under a considerable flow of water, the drops would simply slide away, leaving the surface clean and dry. Discovery of superhydrophobic surfaces was an achievement for humanity – yet the humble lotus plant has been doing this for millions of years. 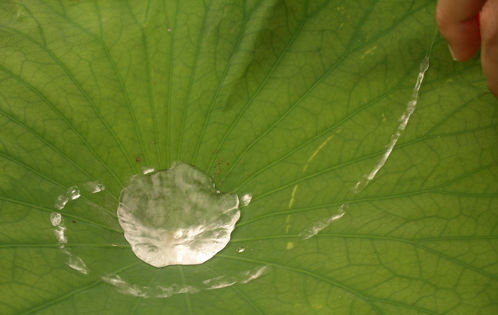 Using nanotechnology, we can now manufacture surfaces of this type, and it is very possible, therefore, that cleaning will be a thing of the past in a few decades. In fact, the first applications of this technology have been self-cleaning surfaces. It is already available on a commercial level, and the treatment will probably become widespread a few decades from now.

At the other end of the spectrum from the lotus is the gecko, an animal which uses its legs to hold onto different surfaces. Thanks to the copying of this technology, the Stickybot (sticky robot) saw the light in 2002 and the Speedy Freelander in 2008.

The technology used in these robots could be the key not only for rescue missions in the future, but also for new types of anchoring solutions for mechanical elements such as steel cables.

Another technology based on materials and surfaces is colour-based indoor temperature control. Although this technology is usually associated with helping animals to hide, it is common knowledge that changes in colour have a thermoregulatory purpose. This is key in construction, since the cost of temperature control is very high. We’ll have a look at that later on.

In nature, it is rather difficult to distinguish between shape and function. In animals, plants or fungi nothing is trivial, nothing is there simply for show. We will first look at shapes applied to moving structures, and then at several examples of other shapes in buildings. 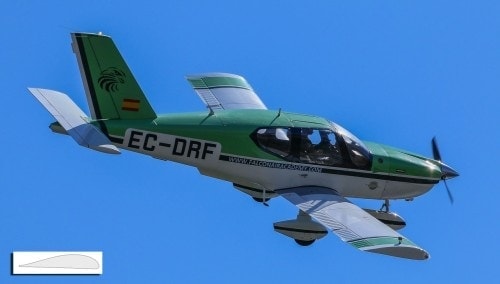 One of the most common functional shapes applied to engineering is the profile of aeroplane wings or the sails in sailing boats. Granted, they don’t beat to create thrust – that’s something that the engines or the wind will do –, nor do they have feathers. But the wing profile is what makes it possible for aeroplanes to stay up in the air, and for the wind to make sailing boats move forward. 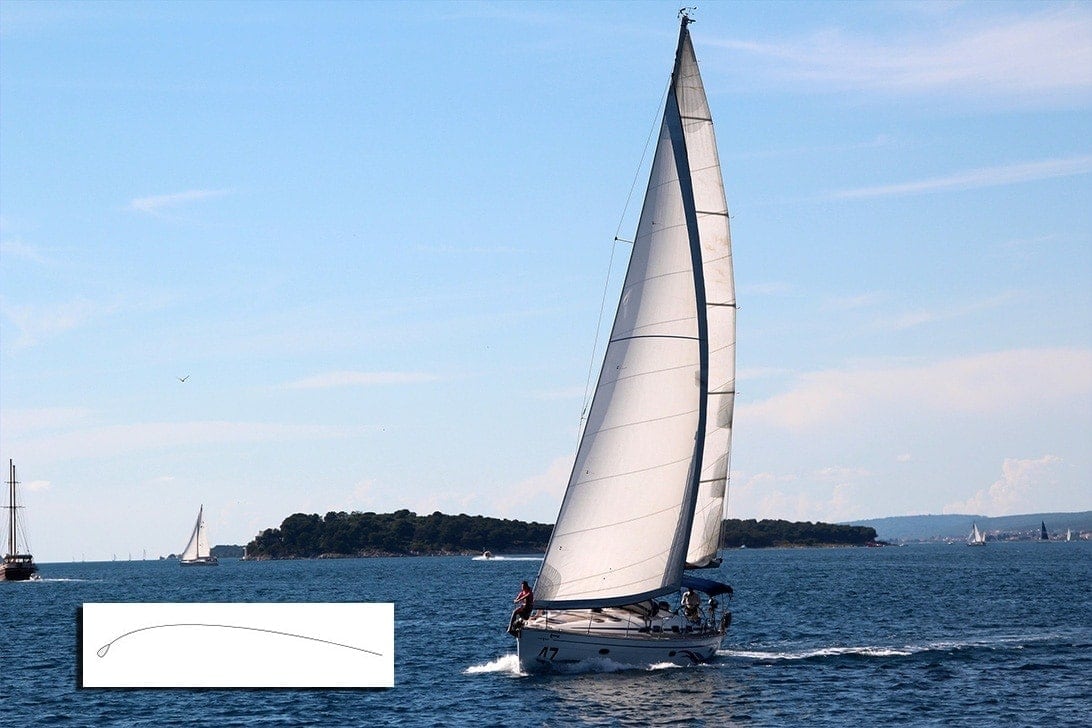 This same profile also serves as the basis for windmills, for the blades and anti-torque rotor of a helicopter, the turbines in power stations or the front and rear wings of Formula 1 cars.

And staying with sailing boats and aeroplanes, we find another of the shapes we have been using for thousands of years – many of them without really knowing why –, also taken from animals. This is the spindle shape (fusiform), which guides us on the perfect proportions for objects which move through fluids.

As fishermen know very well, most fish have the shape of a spindle, whichever way you look at them. Something rather more difficult to visualize in birds, at least until they take off in flight. But with such shape, resistance to air and water while moving forwards is kept to a minimum.

This spindle shape has been used in boats and aeroplanes throughout our history, but we also see it in surf boards and helmets, for example – and, of course, in spindles.

Biomimetic design in buildings and temperature

There are different ways of adapting biomimetics to buildings, especially if we start looking at mixed structures such as mobile constructions or those with mechanical energy recovery systems. However, we will focus here on how some buildings use different properties taken from nature to minimise the energy costs of temperature control.

Given that we have already analysed some properties of structures such as boats, aeroplanes, robots and self-cleaning surfaces, we will now look at how to achieve a comfortable temperature in our buildings using biomimetics.

An exceptional example of a biomimetic building is the Eastgate Centre in Zimbabwe. This is a shopping centre which opened in 1996 and which uses a heat venting system similar to that used in termite mounds. This building saves close to 70% of the energy that would have been consumed had it been built along more traditional architectural patterns. 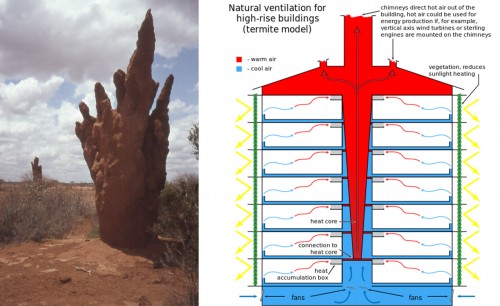 Termite mounds are huge structures – many growing to a height of 4 or 5 metres – which host colonies of millions of termites. Especially in hot climates, where air and ground temperatures are around 40ºC, an engineering (or termite!) solution is required to vent the inside heat. 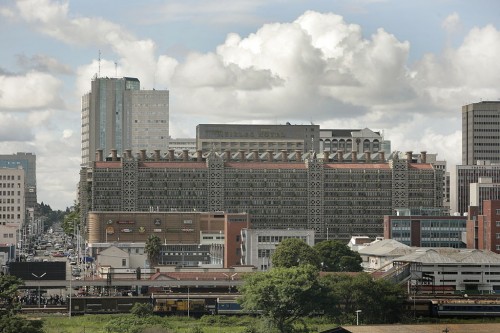 In order to achieve this, termites insulate the walls of the mound – which receive most of the sun’s rays – from the inner chambers. Moreover, these are built vertically over a large hall-like area under the ground. The cold air in this chamber is sucked up by the hot air streams which tend to rise through convection.

But this is not the only thing that has been inspired by termites. Harvard University went even further in 2014 and began to research not only the thermal system used in termite mounds, but also the building methods used by termites, in order to adapt this to robots.

In the future, robots similar to the TERMES robots at HU will be constructing our buildings on the basis of a blueprint.

We mentioned before that some animals regulate their temperature by changing the colour of their bodily pigmentation, something that would be extremely handy in buildings in temperate zones. If buildings are painted white, in winter they will have an energy loss because they won’t make use of the sun’s warmth; while if painted black, in summer they will be more like an oven – with us baking inside.

This is precisely what thermochromic or thermochromatic paint avoids.

Think of two layers of paint on a building wall: a white layer next to the wall, and a black layer over the white one. The sun’s rays hit the black layer, which will warm up. This is extremely useful in the winter, as the heat will be passed on into the building, partly avoiding the use of heating.

On reaching a certain temperature, magic happens. The molecules in the black pigment start to line up in a way that makes the layer appear grey and, eventually, translucid – along similar lines to what happens in Polaroid glasses. In other words, once a certain temperature is reached, the building turns white and the sun’s rays will be reflected outwards. Perfect for the summer.

Because solar radiation varies immensely from one season of the year to the next in temperate zones, the colour of buildings has been the subject of heated debate for decades. This type of paint could solve that debate, and, in the meantime, help us save on heating and air conditioning costs.

And it would also give us a city that changes with the seasons.

Why not go further?, was the question that architects from the Kiefer Technic Showroom asked themselves. This south-facing building constructed in 2007 in Austria – also a temperate country – uses a series of ceramic modular automated panels to deal with differences in outside light conditions and thereby regulate the temperature inside the building.

Because the panels are white, they are perfect for reflecting the heat when they lie against the building walls. An excellent solution for the summer, when each user will be able to regulate the aperture of the panels depending on natural light and heat, keeping out any unwanted excess.

In winter, the panels can be opened completely, thus allowing the sun to warm up the thermal mass of floors and walls during the day, and then closed fully at night to keep the heat in.

It may be in fashion today, but the fact is that we have been using biomimetics for quite a while. From the windmills in Don Quixote – which used wing profiles to grind cereals – to the way in which we copy leaves for the purpose of making solar panels.

Considering the millions of iterations (meaning living organisms) that nature has to offer, it should not come as a surprise when biomimetics becomes a requirement for all structures in the future.