It was the summer of 1992, and many children boasted of having a Curro T-shirt, or even a Curro soft toy. Curro was the loveable mascot of Seville’s 1992 Universal Exhibition, or Expo 92. A bird with rainbow-coloured beak and tail – a colour for each continent – designed by German illustrator Heinz Edelmann, and representing the pride and transformation of an entire city.

Curro has remained in the memory of all the people who experienced the Expo, but it is not all that remained. Twenty-five years on, the memory of the pavilions that each autonomous community and country built for this international event lives on in this Andalusian city. For Ferrovial, 1992 and the preceding years were marked by great milestones, partly from the renovation of Barcelona for the Olympic Games and partly from the iconic pavilions for the Expo 92 in Seville. We invite you to let your imagination fly back to that year and take a trip through the pavilions of the Universal Exhibition of Seville.

Discover some of the pavilions of Seville’s Expo 92

In 1992, the Commission of the European Community created Vision 1250, an initiative bringing together 32 companies and institutions from the audio-visual sector in Europe (including producers, communications channels, equipment manufacturers or TV broadcasting companies). Construction of the pavilion included a 400 m2 studio through which Seville was connected to the rest of Europe. 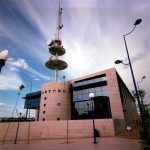 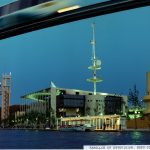 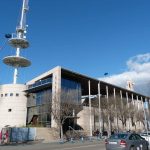 The pavilion was designed by the architect Horacio Domínguez López and built next to the quasi-mythical Cruzcampo Pavilion and opposite that of the International Olympic Committee (IOC). Today, it belongs to the Andalusian TV channel Canal Sur, which still uses the HD studio.

The building occupies an area of 5,561 m2 and reaches a height of 42.5 m. It stands out for its geometry and contrasts, combining different shapes and volumes with glass and other transparent materials. But perhaps its most representative feature is its Communications Tower, conical in design, which gives the pavilion a technological feel.

Pavilion of the Balearic Islands

Miguel Vicens Coll, an architect from Palma de Mallorca, designed the Balearic Islands Pavilion, a structure of 1,840 m2 and 28 metres in height. The whole concept of the building’s design, as well as of the exhibition it housed, was aimed at conveying to the visitor the Balearic Islands and the Mediterranean sea, providing a trip to the past and explaining the history of all the seamen and sailors who made the discovery of America in 1492 possible. But it was also a trip to the present, showing how the islands had developed up to 1992, and showcasing also its tourism.

Miguel Vicens reflected this concept in a glass building surrounded by water, making it look somewhat like a sailing boat, with sails that billowed out from its main facade, and a boat anchored on the lake surrounding the pavilion. The building and the exhibition it housed was structured over five levels: three storeys, a ground floor and a basement.

All along the route, visitors could enjoy exhibitions of ancient art, experience the productive sectors of the islands, and understand their development into a major tourist destination. On the third floor was the restaurant, with a panoramic terrace from which to enjoy fantastic views and the typical cuisine of the Balearic Islands.

When the Expo finished, the building was included in the theme park “Cartuja: Discovery Park”. It was there that from 1993 to 1998 you could visit “Bichomania”, an exhibition of small exotic animals with live specimens. It was finally demolished in 1998 to make space for the extension of Isla Mágica theme park. 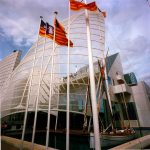 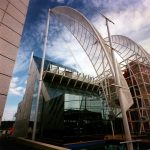 The history of this pavilion begins with the union of 15 sub-Saharan African countries lacking the necessary means for building their own pavilion for Expo 92. And so the architects Alvaro Navarro and Miguel M. de Castilla created a collective space of 14,925 m2 and a height of 25 metres, where Angola, Cape Verde, Sao Tome and Principe, Guinea Bissau, Cameroon, Congo, Côte d’Ivoire, Gabon, Equatorial Guinea, Kenya, Mozambique, Nigeria, Senegal and Zimbabwe brought together their histories, their culture and their traditions.

This was a geometrically-shaped building with an amazing glass front, a bridge over a lake and other smaller, solid buildings around it. Of its 7 storeys only three were used as exhibition space, the remainder being for management and administration, as well as a hall for projections and events. All the diversity of the African continent was there, exhibited over those three storeys. 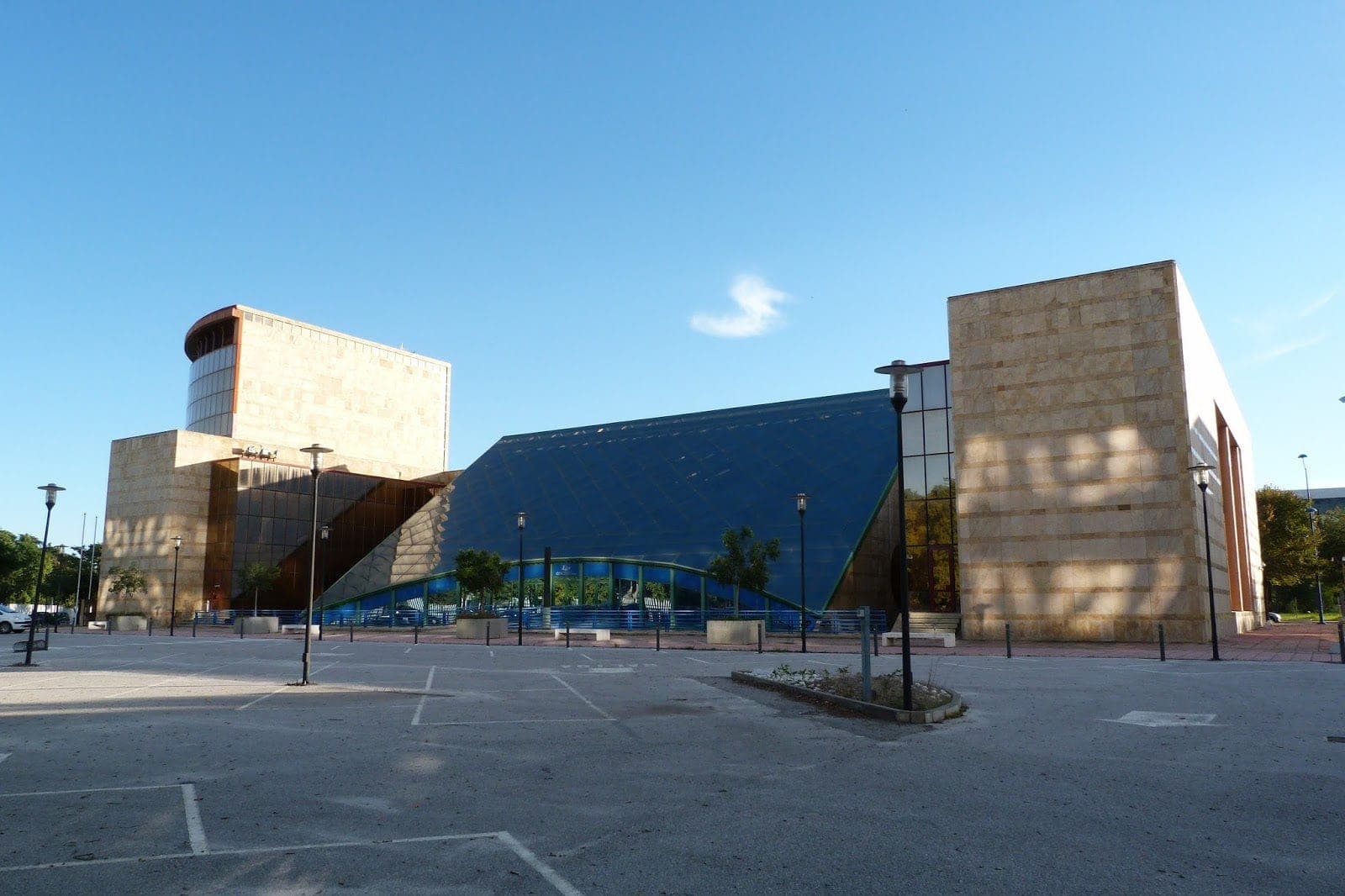 This building, covering 1,024 m2 and reaching a height of 25 meters, was designed by three architects: Oner Tokcan, Hulusi I Gonul and C. Ilder Tokcan. Although it appeared small, with only two storeys and a basement being visible, its striking feature was a tower representing the country’s flag and measuring 25 metres in height by 15 metres wide. It was removed in 1996. 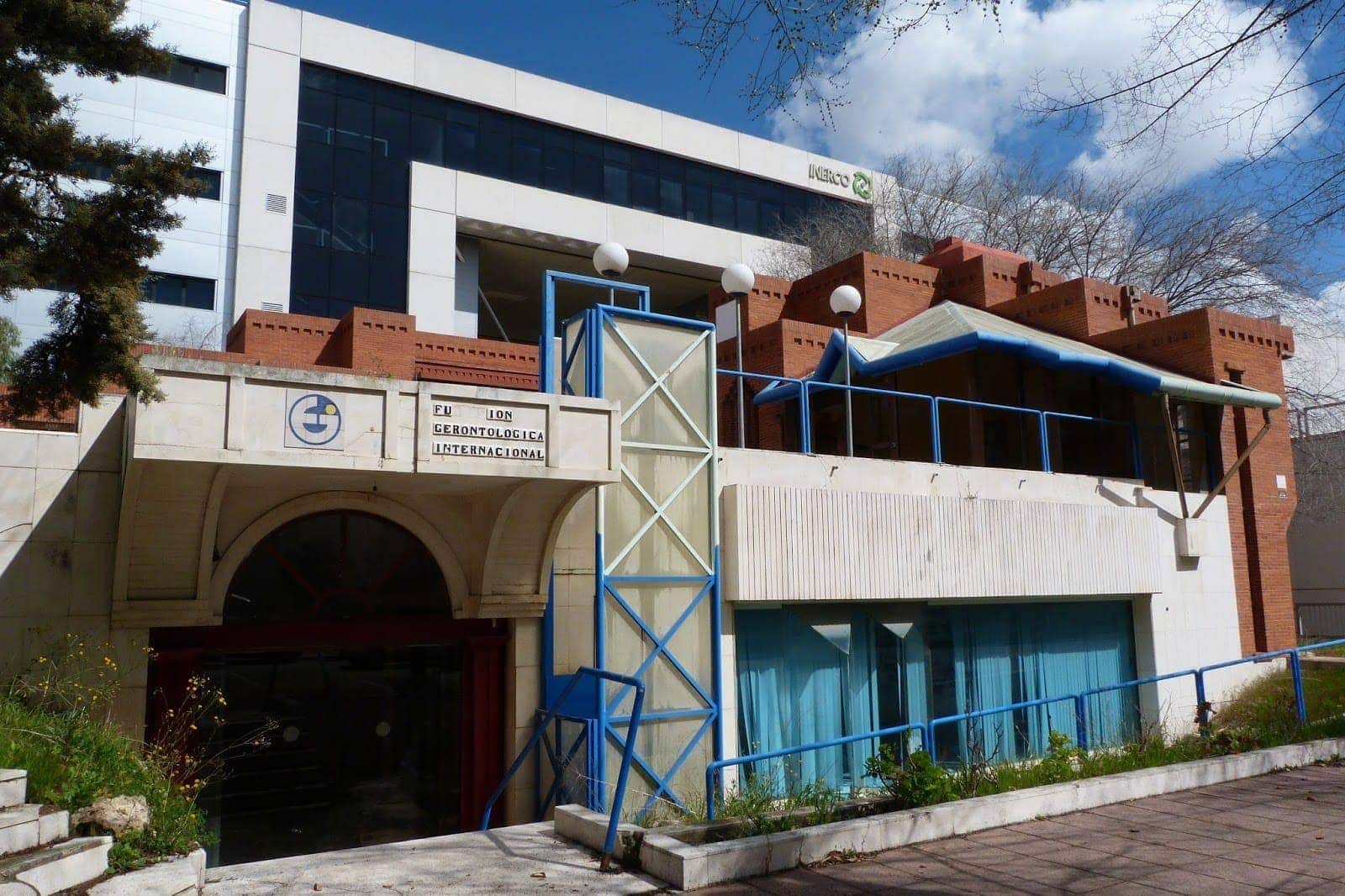 Architects Ramón Muñoz and Antonio Sanmartín created a contemporary building for the Asturias Autonomous Community with the aim that it could be used in the future. A structure designed to be moved once the Universal Exhibition was over, and therefore “easy” to set up and take down. The architects wanted to represent the forests of Asturias, creating a large, open hall with steel pillars. As a special feature, a map of Asturias was projected onto the ground of the outer patio, showing the geography and relief of the region.

During the Expo 92, visitors could learn about the Asturian region, its climate, its history and its culture through its crafts and its music.

Given that it had been designed to be moved, in 1994 the pavilion was taken to Gijón to house the Museum of the Asturian People. 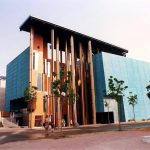 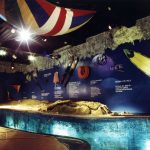 This was undoubtedly the pavilion which had generated the greatest interest, but it was also the most short-lived. What should have been the most iconic building of the Expo 92, and was expected to be subsequently available to the general public, was devoured by flames even before the Exhibition was officially opened, leaving it in ruins.

The pavilion was a rectangular aluminium structure, its most striking feature 15 metallic towers, placed at 24-metre intervals and joined together by large bridges. Although it was in fact a single building, it operated as two separate ones, one housing the Domorama and the other the actual exhibition.

The fire that destroyed the building on 18 February 1992 also destroyed everything inside it, such as the first car ever manufactured in Spain, or the plane belonging to the Red Baron. The only building spared was the one housing the Alcatel Space Cinema, a 3D cinema which was an enormous success over the 6 months of the Exhibition. After the Expo, this was a much-used space. The cinema was part of the nearby “Cartuja Discovery Park” as well as being used by the Puerta Triana Cultural Centre up to the end of the 1990s. It was ultimately closed, and in the summer of 2005 the company IMAX took away the projector, since it was there on a rental basis.

But the history of the pavilion did not end there. The basement area was used as a disco until 2007, year in which this much talked-about building was finally demolished. 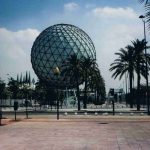 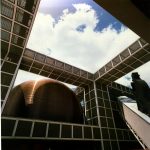 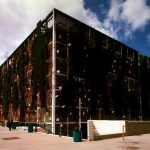