How many millions of people without drinking water would be able to drink if we managed to desalinate the oceans? 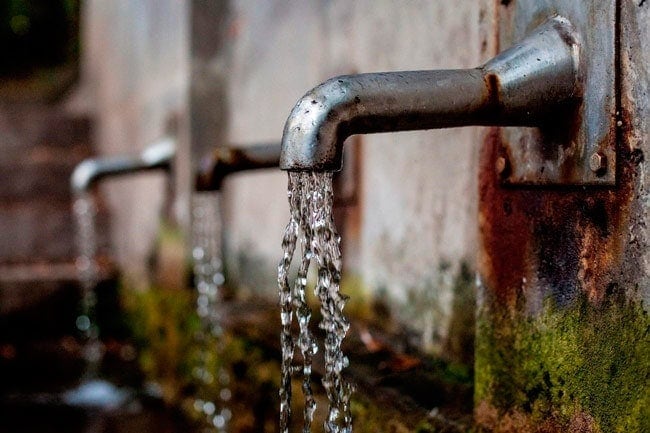 According to a 2015 report by the WHO and UNICEF, ‘91% of the global population uses an improved drinking water source.’ That is 6.6 billion people in the whole world. However, the same report states that 663 million people still didn’t have access to clean water wells. And some had no access to water at all, except what could be filtered from mud through a cloth.
Far from giving ourselves a pat on the back for the problems we’ve already solved in the world, we should perhaps concentrate on all the work still to be done. This year, there have been record levels of drought in Spain, in what has been considered the worst drought in the country’s history. And this has led to intentional fires catching and spreading easily, with another black record being broken: 44 forest fires every day.
Taking water to where it is needed involves more than simply putting cups of water for drinking or cooking on the table. Water is a basic, vital resource without which the environment degrades and turns into a desert of rocks, sand and, finally, salts. Taking water to where it is needed is a task for the developed world, which has the resources required for the desalination of seawater to provide the entire planet with drinking water.

What is desalination all about?

Without taking interest away from the rest of the article, the short answer is that it is possible today to provide the entire planet with drinking water through desalination of a minute proportion of the water contained in our oceans. The techniques for desalination of seawater, separating the drinking water from the salts and organic components of seawater, have been around for a long time.

The process itself is very simple. You can even do it at home: all you need is a pan full of tap water, loads of salt, and oregano (to simulate the tiny living organisms in the sea). Put the lid slightly off-centre and at an angle and turn the heat on. A short while later, you will have perfect drinking water dripping from the underside of the lid.

This method is called desalination by decantation and has the least environmental impact (energy to heat up the water can, and should, be obtained from renewable sources). Salt and organic material (both reusable) on one side, fresh drinking water on the other.

Is there enough water in the oceans for all of us to drink?

The answer is again yes. Everyone should drink about two litres of water per day, and the Woods Hole Oceanographic Institution in Massachusetts estimated the amount of water contained in all the Earth’s oceans and seas at 1332 billion cubic kilometres. Let’s express it in the same units: 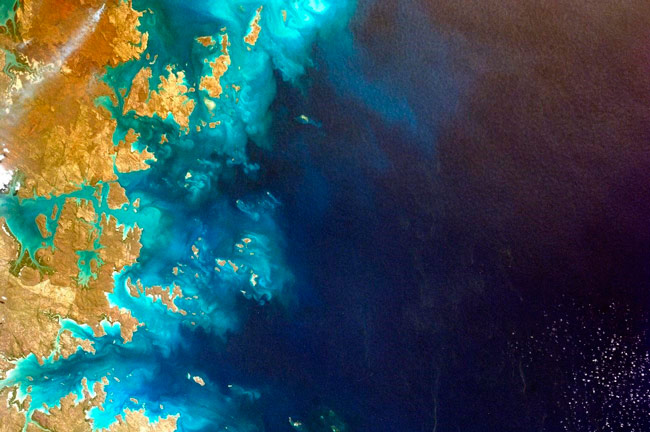 In other words, it would take us 260 million years to desalinate the oceans for human consumption if all the water we drank came from the sea. But this last assumption is not true, nor will the oceans ever empty completely.

Water for human consumption returns days, weeks or months later to the oceans, or comes out of our taps after being treated, so subsequent desalination is not necessary. We are lucky to live on a planet that has a much larger amount of water than we need to drink.

What’s the best technology to use for desalination of large amounts of water?

We have already seen that we have the technology required for desalination even at home, and that there is more than enough water. But if we can boil a few litres and filter them at home, and a large part of the world population lives on the coast, why are there still people without access to drinking water in the world?

The problem is that the amount of energy needed to heat water up to 100 °C is huge.

The energy required to turn water into vapour (and decant it again to get fresh water) is extremely expensive. And so the best alternative today, taking into account cost and energy consumption, are desalination plants using inverse osmosis, a ‘process consisting in pumping water under pressure through semipermeable membranes which separate salt from water’, according to Cadagua.

We can also test this out at home using a plastic bottle filled with salty water, the cap pierced. Place several layers of cloth between the cap and the bottle to act as a filter, and once the bottle is closed, squeeze it in the middle. The water will come out through the pierced cap with much less salt than it originally contained. A few of these filtering processes will eliminate 99% of harmful particles.

How does an inverse osmosis industrial desalination plant work?

The mechanism is practically identical to that of the bottle described above.

First, huge tanks are filled with seawater, for which several large tubes are laid in the water. The diameter of the tubes is large at the point of suction compared to the end reaching the tank, so that they do not act as a hoover nor create currents which might affect the animal life in the intake area. 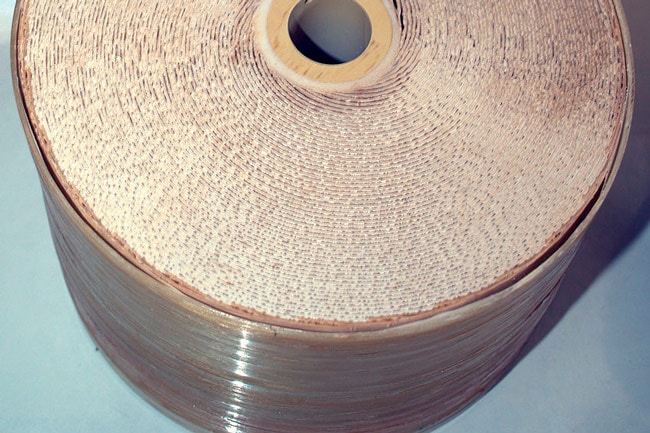 Cross section of a tube used in desalination. The salt water runs through the central part at high pressure, slowly entering the outer layers and depositing salts of different sizes. Source: Institutes for Desert Research

Once the first tanks have been filled, the salt water is pumped through thick filters which separate out the largest particles, followed by ever-smaller filters to gradually filter out all the salts. In recent years, the final stages of the installation include nanoporous graphene filters: which let the water through but trap microscopic particles.

Just as in the example of the bottle, in industrial plants there are two end products from this process: one being drinking water, and the other the residue remaining in the tanks. This residue is brine, or water with a salt concentration of over 5%. Although the amount of brine is very small compared with the amount of salt-free water obtained, it cannot be simply discharged directly into the ocean.

Just as in the example of the bottle, in industrial plants there are two end products from this process: one being drinking water, and the other the residue remaining in the tanks. This residue is brine, or water with a salt concentration of over 5%. Although the amount of brine is very small compared with the amount of salt-free water obtained, it cannot be simply discharged directly into the ocean.

Cadagua, a company with more than four decades of experience in the building and maintenance of inverse osmosis desalination plants, knows well that these water treatment facilities are not used only in the places that would normally come to mind, such as poor regions or overpopulated islands.

Desalination technology is very useful, for example, for expanding something as necessary as agricultural land. This is the case in the Águilas area in Murcia, where a desalination plant provides 180,000 m3/day of fresh water for both human consumption and agricultural use.

We tend to think of desert environments located far from any water sources, but the case of Al-Zawrah, in the Emirate of Ajman, brings us to the Persian Gulf, a marine environment with a high population density and scarce drinking water resources where Cadagua built a plant which produces 45,560 m3 of drinking water every day. An amount equivalent to the consumption of a population of 230,000. 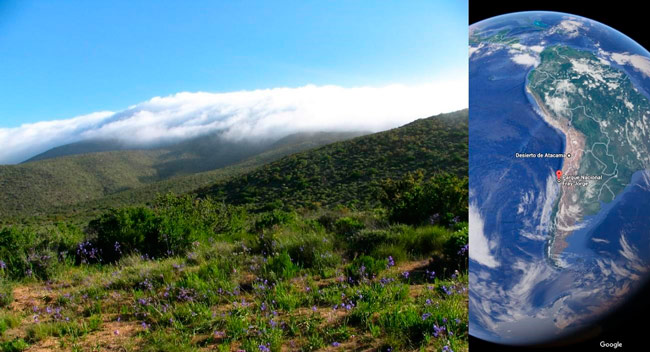 The Fray Jorge Forest National Park, between the Atacama Desert and the Pacific Ocean. The perfect location for a desalination plant which could turn these hills into thick forests again and stop the desert advancing towards the south of Chile. Sources: Wikipedia, Google Maps

Desalination has not only become one of the alternatives to droughts and population growth in areas with few resources, it is also the future of so-called fertilisation or forestation: the recovery of humidity and forests in a desert area.

When there is water nearby, but it is inaccessible

We began this article by saying that it is in our power – in the power of western countries with developed industry and technology – to provide services to communities which lack the necessary tools for providing a water supply. We’ll mention some of Ferrovial’s corporate responsibility projects in Uganda and Colombia:

13 new wells in the Buyende district 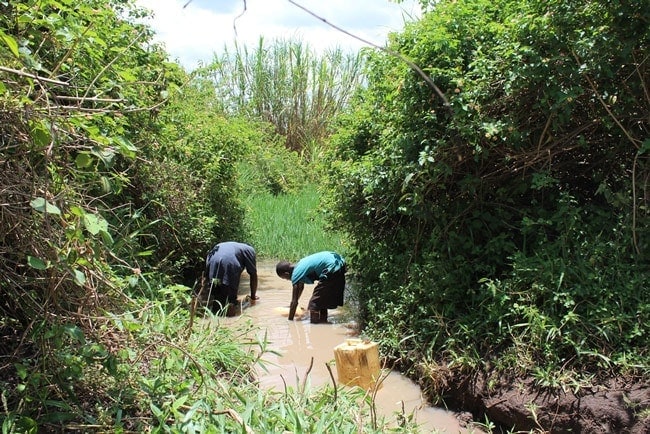 The district of Buyende is a small region in the Republic of Uganda. Far from being the desert region we would expect to find in Africa, it is within the great lakes region, and borders on the Kyoga River. However, the lack of a sanitation network means that the population in the area is drinking dirty water.

Ferrovial implemented its project in several stages: the digging of 13 new wells for water using handpumps (it’s an unindustrialised region in which there are no engines available); awareness-raising on best practices in water use and hygiene; the creation of a self- governance group to manage their own resources; and notions on preventive maintenance for the local population to be able to look after the new infrastructure.

In 2000, the Colombian region of El Salado suffered one of its greatest tragedies, and a large part of the surviving population fled. A year later, 200 families returned to settle on the land once again, but by then the damage to the water network through neglect was overwhelming. Access to clean water for drinking and hygiene is necessary if we are to prevent illness.

Here, Ferrovial will build a solar pump system which works during the day, off-grid. Likewise, many of the pipes will be renewed, so that homes will be supplied directly.

Now that we are technically capable of taking drinking water to any environment near a water source, such as aquifers, rivers, seas or even oceans, and with the reduction in the amount of energy and resources required for such infrastructures thanks to technological advances, we are for the first time capable not only of eradicating world thirst, but also of repairing last century’s desertification.