What if cycle lanes weren’t the future for bicycles?

In a society weighed down by a lack of fuel and social disorder, bands of motorcyclists rule the world. Although dystopic, the plot in “Mad Max” serves to highlight a rather more real fear: an apocalyptic future in which there is no oil, but where we have been unable to find an alternative.

We’re working on hydrogen cells, solar cars and magnetic high-speed trains, but in fact the solution to the transport problem is probably something that our grandparents already had to hand: bicycles.

In recent years, inspired by our Northern neighbours and the drive to reduce traffic densities in cities, many Spanish town councils have decided to plump for two wheels and pedals. The main consequence of this: a profusion of cycle lanes. However, it is not always possible, or necessary, to build cycle lanes. Here are the challenges for a future on two wheels.

In our saturated cities, where combustion engines never sleep, bicycles seem to have become the clean, silent dream that everyone aspires to. However, meeting the demands of certain groups and political ideologies for completely segregating cycling traffic is complicated and, perhaps, unnecessary. 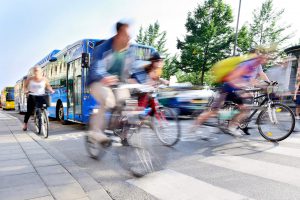 Road markings, traffic signs and traffic lights, crossings and strict definitions of what vehicles have priority, traffic separation barriers and myriad other elements complicate the coexistence of bikes and cars in separate, yet shared, spaces. “On secondary streets, where traffic is slow and rather light, the solution is for cyclists to drive on the street itself,” concludes Eneko Astigarraga. 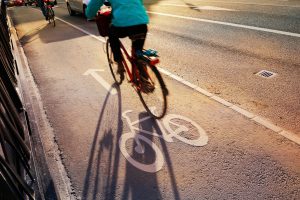 Outside the cities, things change. The speed of motorised traffic increases and therefore sharing the same space means increased danger for cyclists. Moreover, the availability of space and the disappearance of elements such as pavements or crossings makes the construction of cycle lanes easier.

According to NACTO, the US National Association of City Transportation Officials, a very active organisation on recommendations for the construction of cycle lanes, traffic should be clearly separated on high speed roads. The most important issue is a separation of the lane by means of a buffer or reservation or, failing that, a large, well-marked space between the cycle lane and lanes for motorised traffic. Additionally, the lane should be wide enough to allow cyclists to overtake other cyclists without encroaching on the car lanes.

Thus, although it might seem that there is greater availability of space outside cities, the dimensions required for intercity cycle lanes are also different. The solution in this case could lie in the recovery of old infrastructures.

“Cycle lanes are mostly needed in routes into and out of cities, both for the safety of cyclists and to ensure that other traffic is not affected,” explains Eneko. “Setting up safe corridors in intercity roads is also necessary, but these could even be completely separate from regular motorised traffic. Looking for suitable, more cycle-friendly routes by using old secondary roads, for example.”

Should we have cycle lanes everywhere?

The first time you ever see a bicycle traffic jam, you won’t forget it. In Holland or Denmark, two of the countries where bicycles are a major means of transport, these are quite common. Many streets in Dutch or Danish cities have separate cycle lanes, and there are even high-speed corridors between different parts of the city where bicycles have priority. 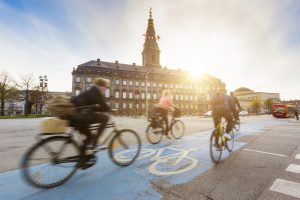 However, a quick look at infrastructures in Amsterdam or Copenhagen shows that there is a lot more than just cycle lanes. Safe parking spaces close to workplaces and public transport hubs, or specially-adapted areas in residential buildings for keeping your bicycle, are also essential for stimulating the change from car to bike.

Many groups of cyclists are demanding such infrastructures, rather than the construction of cycle lanes. “Bicycles aren’t being seriously considered as a mobility option,” says Eneko Astigarraga. “The separation of bicycle lanes creates situations of dominance, situations of power of one vehicle over another. They actually generate tyranny. I have my own lane, so I won’t think of anyone else. Even if my own space is not actually perfect, I’m in charge here.”

An argument that might seem striking to us, but which we have all experienced if we have encroached on a cycle lane as pedestrians, cycled on the pavement, or pedalled between cars. Although it might seem utopian today, though perhaps not dystopian, the solution might be to regulate traffic on existing roads, rather than continue to build the future of bicycles on yet more asphalt.