Inclusive cities: a smart city adapted to all capabilities 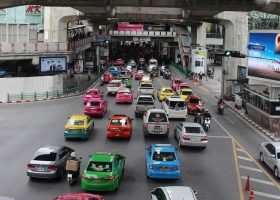 If we focus on sociability as the starting point for design and tapping citizens as the source of innovation, how do we go about crafti...

Can citizens play a role in improving their cities and services? Can ordinary people help minimize the time their waste spends in the neighbourho...

Most of us think of ourselves as normal because we are part of the norm. Nicely installed in the majority, we often don’t realize that cities must be designed for all, and not only for the majority of “normal” citizens. For the small percentage of people who are born deaf, who cannot move about on their own, or who need a stick to ‘see’ the streets; these are citizens who also need cities adapted to their particular needs.

Smart cities are the cities of the future, perhaps a rather utopian reference towards which we should move and target the design of our cities. Smart cities are, obviously, inclusive cities adapted to all capabilities, and not only to the 90% making up the norm. This article looks at some initiatives which make cities more accessible for all.

If you are a young, healthy 35-year-old, the expression architectural barrier will make you think of a wall, a fence, a railing or perhaps a large pit or trench. Something which prevents you getting through. However, for someone with reduced mobility, such as most older people, three steps without a handrail to hold on to can already be a considerable architectural barrier.

A road with no zebra crossings, or with zebra crossings with no ramps to access them, are also a barrier for people in wheelchairs, whether motorised or not. Which is why in recent years pavements are being built with a gentle slope towards the road.

In the beginning, the difference in level was acute, with the use of a block placed at 45º to replace the kerb. Later on, longer ramps started to be used: these took up part of the pavement (and required certain building works). Today, the road surface is usually built up to the pavement level, so that both are on a level and thus make pedestrian mobility and the delivery of goods to local businesses easier.

In addition to initiatives for level pavements, there have been others, such as, for example, the possibility of crossing single-lane streets at any point, or placing speed limits at 30 km/h. When we drive, we tend to get impatient at what we consider an excessively large number of zebra crossings, or traffic lights that take too long to change. However, we rarely consider just how difficult it must be for an elderly person to cross at a traffic light, especially in cities designed to favour use of private vehicles.

Current traffic lights have been designed for comfortably crossing a road at a walking speed of 1.2 m/s. The problem arises when the average walking speed in cities falls to around 0.9 m/s for men and 0.8 m/s for women. In the case of the elderly, nearly 35% have trouble adapting to these times, or covering the distance to a zebra crossing.

This means that many times elderly people are obliged to run (with the risks this implies), and so many opt to stay at home, with traffic lights becoming yet another barrier which deprives them of the city and condemns them to the solitude we tend to associate with old age. This is not the case in villages with few inhabitants and little traffic, where elderly people are out and about most of the time.

Another barrier is the lack of ramps, lifts or elevators in public areas, be it council buildings or transport services such as buses or the underground. Nowadays, walking with a rollator or using a wheelchair or children’s pushchair has become a disability in most Spanish cities, especially when catching a bus as a group. Most buses only take one of these aids per bus, which means that, say, an elderly couple where both use a rollator would not be able to travel together. In other words, for inclusive architecture we also need an inclusive regulatory framework.

How a smart city adapts to different degrees of visual impairment

Some European cities have restaurants where you can experience what it feels like to eat in the dark. You don’t need to close your eyes to do this, simply the restaurant has no light. It is an incredible way of experiencing first-hand the frustration that visually impaired people must feel in our society, where they increasingly come up against barriers that they cannot overcome without help, such as construction works that force them to take a long detour over unknown territory.

Having said this, we have made progress in adapting smart cities to visual disability, for example by using tactile paving to mark the perimeter of the pavement, or the end of the platform at underground stations. The yellow strip on the image below, with its uneven surface, is tactile paving, and allows visually impaired people to know, through their feet, that there is danger ahead: a road, a drop, etc.

In 2013, architect Chris Downey, who went blind suddenly in 2008, explained in a TED talk the advantages of architecture when designed by a blind person. During the talk, Downey said that “before losing my sight I was more focused on how I saw a particular space. Now I think of what material textures feel like, of temperature and sounds. I try to design using more of my senses.” More inclusive cities are not those which are more adapted to blind people, but rather those that are shaped by them. Permeable cities.

In this sense, public platforms such as those provided by some city councils for their citizens are crucial. In 2016, the whole of Europe was talking about the renovation of Madrid’s Plaza de España, a project which was initiated through citizen demand a few years earlier and which the city council approved through one of such platforms.

Private investment is also important and can be used to solve technical problems. A few years ago, Wayfindr developed hardware and software to help visually impaired people to navigate inside buildings and systems such as London’s underground. Supported by a system of beacons with Bluetooth connection working through an app, this is a step-by-step guide through specific facilities to aid the mobility of visually impaired people:

Inclusive smart cities need tools of this type to empower people who now depend on others. It is hoped that Bluetooth guiding systems such as this will be widespread in city centres in the next few years, and perhaps by 2020-2025 no blind person will need to be accompanied by a sighted person to move within their city.

Social events open up to people with hearing impairments

Paradoxically, blind people are more visible than those with hearing problems, and especially deaf people. A blind person normally uses dark glasses, a stick, or has a dog or another person to guide them. Deaf people, however, are hidden behind the appearance of normality of which we talked at the start: they are invisible while in full view, and barriers only appear when they try to interact with their surroundings.

And so, we were pleasantly surprised when systems such as hearing loops appeared in smart cities. These loops, also called audio induction loops, allow people with hearing problems, and even deaf people with an adapted cochlear implant, to hear in high definition.

The induction loop is a technology using magnetic fields to operate, rather like a loudspeaker which, instead of using air pressure waves, generates magnetic waves. When these reach the receiver in the hearing device (whether headphones, hearing aids, cochlear implants, etc.), they generate a sound or vibration within the ear.

The above image shows the hearing loop logo at a cashier line, but it can also be found in public buildings, museums, cinemas, at sporting events, etc. According to the Spanish Confederation of Deaf Persons, 2.3% of the population suffers from some type of hearing impairment, a figure that grows as the population ages.

Even if for selfish reasons alone, we need to adapt our cities to our “future new deaf”, and the same applies to visual disability, which is more common in elderly people, as is lack of mobility. Even people with no health problems or disability at present will grow old with time. And that is something that none of us can avoid.

Asthma sufferers, invisible in the midst of pollution

A new invisible minority has emerged in large cities in the last few years: people with asthma, who are prevented from using public spaces due to high levels of pollution, or those who must use medication all year round to be able to lead a normal life.

Estimates indicate that 10% of all adults develop asthma as a result of pollution in cities; and it is a well-known fact that asthma gets worse when the number of  particle parts per million in the atmosphere increases (CO, CO2, NOx, CH4, O3…). Mobility and heating and air conditioning in cities continue to emit huge quantities of toxic particles into the atmosphere, which us citizens then breathe in.

Asthma is a debilitating condition, and therefore we can talk of incapacity due to pollution: not being able to do sports like other people, or not enjoying a sense of smell, are some of the less profound consequences. For these and other reasons, we need inclusive smart cities where clear skies are valued more than in our current cities.

A well-known condition, though many times ignored, is intellectual incapacity, which can make people have problems communicating and understanding their environment. If we add to this environments where signage is confusing or uses large amounts of text, we will end up with highly confused people who find it impossible to communicate. Isolated amongst the masses, or infoxicated (intoxicated by information, or information overload).

Influenced perhaps by smartphone language, cities are increasingly using pictograms for guiding citizens, thus doing away at a stroke with language barriers for tourists, dyslexic people and people with learning disabilities. Something as simple as an arrow painted on the ground can substitute a sign reading “Keep to the right”:

Traffic signals are optimised to avoid confusions whilst driving, but city signage still has a lot to learn in this respect. A clear example are hospitals, where large boards announce the various medical specialisations with not very large text; this could be coupled with icons to simplify the message, in the same way as we use the male and female icons for identifying toilets.

If there is no constructive criticism in the way we design our cities, they will stop being smart. And this means designing them to take into account all capacities. Failing this, our smart cities will turn into dumb cities.

If we focus on sociability as the starting point for design and tapping citizens as the source of innovation, how do we go about crafti...