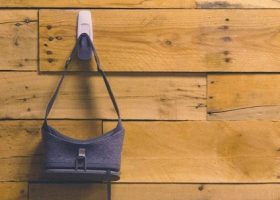 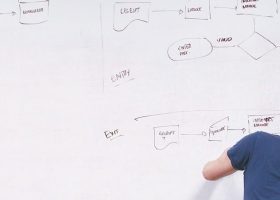 It was time. The committee was waiting in the meeting room and his intervention was the last of the day. Alex breathed deeply and mentally revised the main points in his presentation. He repeated to himself for the umpteenth time the introduction which would allow him to set off on a good footing and ward off nervousness if the operations manager, key influencer in the decision, were to watch him with that penetrating look that was sure to unsettle him. Another challenge if he wanted the work done on the project so far to shine and so obtain approval for its next phase.

That initial conversation held 6 months ago, when the initiative seemed an unassailable challenge to most, seemed a long way away.

He entered the room calmly, with a smile on his face, greeting all those in the room and taking care to make brief eye contact with everyone in the audience in as casual a manner as possible. Amazing that just two months ago Alex would panic at the thought of speaking to an audience on important issues.

He started with his opening sentence and continued in the set order, presenting background information and the project’s main achievements, to get to the point at which they were today. After giving some facts and figures to provide substance and get the attention of an audience that seemed connected and interested, he went on to explain the main lines and many resources required to address the next phase of the project. Suddenly, the director of operations looked at him with his searching look, got up slowly and unexpectedly, and left the room without a word.

Alex tried to keep calm, but after a few seconds he could feel his heart beat increasing, the sweat on his forehead as he adjusted his glasses and mumbled something incoherently as he momentarily lost track of what it was he had to say. The rest of the audience looked at him undaunted. He concentrated his gaze on the marketing director, who was following the presentation from the front row, and continued his presentation, finishing on a positive note with a call to action. Just before he was finished, at a crucial moment, the screen on which he was projecting his last slide flickered a couple of times and went blank. This couldn’t be happening! He’d tried it out dozens of times, and this was the last thing he was expecting. Alex resorted to irony to gain time as he cursed Murphy and his law, but he felt he still wasn’t 100% ready.

He lowered his head slightly and aimed the visor on his virtual reality goggles towards the button to select sending this new practice exercise to the cloud. The message ‘processing your feedback’ appeared in front of him in blue as his virtual assistant on public speaking rated his exercise and gave clear recommendations on tone, rhythm, pauses, visual contact with the audience, etc.

After listening for a few minutes, he took off his goggles and found himself again at home, with his wife asking him:

How was it this time, Alex?

To which he replied:

I’m nearly there. A few more practice rounds and I’ll be ready to give a TED talk.

Aware that he had a few more days to go to the presentation, Alex took on board the suggestions of his virtual assistant, and was relieved to remember that the company’s director of operations, in addition to being his boss, was the main proponent of this strategic project. 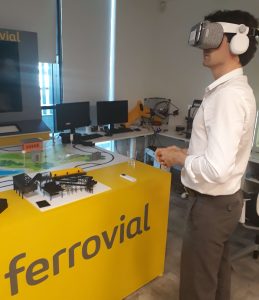 Immersive virtual reality allows us to immerse ourselves in digital scenarios and observe or interact with the elements that make it up. Applied to the field of education, it allows us to experiment ‘Learning by doing’ in a personalised manner, with the flexibility of practicing at a time a place which best suits the student.

Technicians, creative persons and educators work together to increase the motivation and impact of people training. Different providers and increasingly robust technologies are appearing on the market, and companies must be ready to explore new formats which help overcome physical barriers and are effective and scalable for the personal and professional development of their employees, while providing a good user experience.

At Ferrovial, we are committed to using and exploring emerging technologies, and we combine these with human talent to boost people self-awareness and allow them to develop their full potential.